Posted in: Disc Reviews by Archive Authors on January 13th, 2015 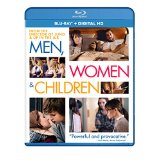 The internet is destroying everything. It seems crazy, but it’s true, and most people know it. I mean that so many businesses have been destroyed by the tremendous growth of the internet and its insidious and unchecked influence. The newspaper business, music business, broadcast business and probably the movie business have been fundamentally and permanently altered. Men, Women and Children addresses how it affects each and every one of us on a daily basis. We’re all aware of this. It’s our lives now, and it wasn’t 10 years ago. Texting on iPhones is so addictive with some people that they are oblivious to how obnoxious it is. Most of us are aware, on some level, how much computers and phones are sucking away what used to be our lives. We know it, but the die is cast. That’s the problem with Men, Women and Children. We know everything already, and this movie shoves it down our throat. The subject is definitely timely, but too much of what happens in this movie is like a parade of clichés.

Jason Reitman (Juno, Up In The Air, Thank You For Smoking) is a good director, but he has been losing his touch, citing films like Labor Day and Young Adult. This film is packed with good actors, but they all seem wasted, even Adam Sandler. Sandler is the big star here, making another stretch into dramatic territory. Sandler has done very good work in other people’s movies before like Punch Drunk Love, Reign On Me and Spanglish, but not here. Here he is a limp, washed-out nothing, which is what the character demands but still is not a good thing to see. Most of the other good actors like Rosemarie DeWitt, Jennifer Garner, Judy Greer, J.K. Simmons, Dean Norris, Ansel Elgort, Dennis Haysbert and Emma Thompson here seem wasted with predicable and dreary functions in aid of a boring puzzle.

Men, Women and Children seems like a missed opportunity. I think audiences will identify with the awkwardness and unhappiness of the characters but still feel uncomfortable, probably because in their subconscious they feel a kinship with the emptiness of the people on the screen. No answers are presented, because there probably are none. Our obsessions with these new toys we have will probably not go away. Some of us will try to limit our dependence on them, but most of us won’t. We recognize these diminished relationships, but that doesn’t make them less banal. I think the most thankless role is Jenifer Garner’s overbearing, overprotective and unrelenting mother who edits every keystroke on her daughter’s every social media interaction.

Men, Women and Children is presented in its original aspect ratio of 1.85:1. The 1080p image is arrived at with an AVC MPEG-4 codec at an average 35 mbps. There’s almost a documentary feel to this high-definition image. There was an effort to keep the image as natural as possible. Colors are pretty much reference. Black levels are average with little call for serious shadow definition here. Of course, the “unnatural” element is the on-screen representation of the internet activity. It looks pretty much like you were super-imposing a computer screen onto the image. That’s exactly what they were going for here, and it is surprisingly organic. It quickly becomes part of the image information and wasn’t at all distracting.

The DTS-HD Master Audio 5.1 is pretty much there to serve dialog. There isn’t room for a ton of aggressive surrounds here. The audio presentation does a good job of subtle sounds like the clicking computer keys or entry sounds on a phone or tablet. It’s kept deeply underneath the sound field but adds just that extra pop of believability.

Virtual Intimacy: (13:00) Those appear to be mutually exclusive words. The cast and crew offer up a conversation about the technical/social media environment and how it has changed what it means to be a teen. There are some serious issues here, and the feature certainly gives you some things to think about.

Seamless Interface: (8:29) This feature focuses on the internet world graphics.

Deleted Scenes: (9:49) There are five with a handy play-all.

The story is very muddled with a large of array of characters floating off in different directions, and it is not helped by the deity-like narration by Emma Thompson discussing our insignificance in the universe on our pale blue dot. The pale blue dot, which is elaborated at great length, is what Carl Sagan called Earth after having seen a Voyager satellite photograph as it leaves the solar system. Being reminded repeatedly that we are insignificant and meaningless seems off point to the story. I’m not sure this kind of story can be told effectively, probably because it is too judgmental. The movie is basically condemning us for the way we live our lives when there is little likelihood that we will change. Men, women and the age-challenged are all crazy, and the internet is making it worse. It’s not going to change, so we’ll have to get over it.