Posted in: Disc Reviews by Gino Sassani on February 3rd, 2015 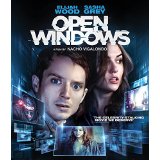 “You like that stuff, but it’s kind of a tease.”

Give Elijah credit for taking some interesting chances with his acting choices since his long and successful run with the Lord Of The Rings trilogy and his subsequent cameos in the Hobbit films as well. No one can accuse the actor of resting on his laurels. His roles have been outside the mainstream. Most of his recent work involves the quirky series Wilfred, where he sees a man in a dog suit instead of his neighbors canine. Add to the list of offbeat roles that of Nick Chambers in Open Windows.

Nick Chambers is a huge fan of scream queen Jill Godard (Grey). He maintains a fan blog where he spends a lot of time finding and posting pictures and videos of the actress. He has entered and won a contest to have a dinner date with the star. He travels to the Comic Con-like convention where he is waiting in an assigned hotel room for the big night. He’s watching Jill’s panel at the convention on his laptop. Suddenly a voice who identifies himself as Chord (Maskell) informs him that he’s with Jill’s management group, and she has decided to cancel the date. But before Nick can get disappointed, Chord offers something even better.

Chord begins to send him programs that soon tie his computer with all aspects of Jill’s life. He’s now hacked into her phone and computer including their cameras. He can listen to her calls and read her texts. He also is provided with a linked camera to her hotel room. It’s all happening too fast, and before long Chord has him involved with violence and stalking that goes beyond anything he could have imagined. The results are car chases and cases of mistaken identity that lead to a final act that is littered with the kinds of twists and turns I shouldn’t really tell you about here.

The first thing we really need to talk about here is the style of the production. Most of the images we see are from the crowded desktop of Nick’s computer through the various windows he has open. It’s a kind of found-footage film that contains plenty of shaky amateur images with the idea that it’s happening now. It’s certainly an interesting a new take on that style. Mostly it worked OK. There are times when the busy graphics are more of a distraction. It doesn’t help that director Nacho Vigalondo is trying to distract you with far too much misdirection and unnecessary distractions. These distractions include a trio of hackers who think Nick is a famous renowned hacker and up a part of the story. Truth is that they add nothing to the plot and only serve to derail the tension that the movie is building through a pretty solid performance by Wood.

That’s really the heart of this film. Wood sells it completely when he’s allowed to take over the narrative. Unfortunately, Open Windows is one of those films where a director is trying to be so clever that he ends up outsmarting himself out of a good movie. He does not trust the story or the actors enough to keep the focus planted anywhere for long. When he isn’t obscuring our view with his “clever” pictures, he’s pulling us away from the good stuff by driving us through another unnecessary twist. Open Windows would have been best served if someone had just slowed down all of the “innovation” for just a minute.

If you approach Open Windows expecting a voyeur story, you will be disappointed. While that’s the direction the box art suggests and in fact appears to be leading, that’s not what we have in the end. The victim is Nick as much or more so than Jill. This is a film about manipulation and just how far someone will listen to a commanding voice out in the darkness. The fact that most of these things are not what they seem to be can be like a welcome spice, but Vigalondo empties each bottle into the broth. Sometimes it’s the ability to hold back that best serves the finished product.

Open Windows is presented in its original aspect ratio of 1.78:1. The 1080p image is arrived at with an AVC MPEG-4 codec at an average of only 20 mbps. I’m not sure that the high-definition image presentation does much to add to the film. Of course, the digital photography is flawless, but it’s not really intended to be of the highest quality. The image is almost always dark even in the rare daylight scene. Thankfully, black levels deliver. The various images are intended to appear as if from a cell phone or computer screen. The image is sharp, but detail gets lost in the odd color correction. The image certainly matches the intended inferior sources they represent.

The DTS-HD Master Audio 5.1 is not going to shake your theater with huge sub response, nor will you experience a great amount of surround effects. Remember that most of this is dialog, and much of it coming from a laptop or cell phone. Dialog is clear, and that’s the vital purpose of the audio presentation. There are some rather nice atmospheric cues in the minimalist score. You won’t lack for clarity at all here. The best thing I could say about this one is that it literally disappears into the viewing experience.

The Making Of Open Windows: (15:51) Much of this is in French with English subtitles. The cast and crew offer the typical insights along with some nice shooting footage.

When Bill Gates named his operating system Windows, he might have been on to something bigger than even he realized at the time. For many of us today, our computers are our windows to the outside world. This is how we view and imagine our realities today. Open Windows takes that promising concept and gives us just enough to ponder our own “windows” into the world. Vigalondo overthought this one, and the best advice I could give him for the future is, trust your resources and most important of all: “Stop thinking”.

Gino Sassani is a member of the Southeastern Film Critic's Association (SEFCA). He is a film and television critic based in Tampa, Florida. He's also the Senior Editor here at Upcomingdiscs. Gino started reviewing films in the early 1990's as a segment of his local television show Focus. He's an award-winning recording artist for Omega Records. Gino is currently working on his 8th album Merchants & Mercenaries. Gino took over Upcomingdiscs Dec 1, 2008. He works out of a home theater he calls The Reel World. Favorite films: The Godfather, The Godfather Part II, The Body Snatcher (Val Lewton film with Karloff and Lugosi, not the pod people film), Unforgiven, Gladiator, The Lion King, Jaws, Son Of Frankenstein, The Good, The Bad And The Ugly, and Monsters, Inc.
Contest: Win A Copy Of RPG (Real Playing Game) From ARC Entertainment Exclusive Interview With Robert Kline Director/Writer The Reagans: The Legacy Endures