Posted in: Disc Reviews by Brent Lorentson on March 20th, 2015 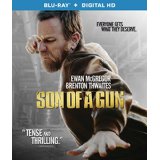 From the moment Son of a Gun opens up taking you behind bars as JR (Brenton Thwaites) is being processed into an Australian prison, it is the start of a journey that throws everything at its audience till the final credits roll.  I have a hard time figuring out just how to classify Son of a Gun; it is everything from being a film about self-discovery, a guys-behind-bars film, to being a heist film and so much more. The title refers to JR as he goes about serving his time behind bars and captures the attention of an infamous thief Brendan (Ewan McGregor).  Brendan takes in the young man and protects him from would-be attackers, but of course the protection comes at a price.  JR makes up for it by helping spring Brendan from prison in a clever prison break that somewhat reminded me of the prison escape in Superman 2 (you know, when Lex Luthor is rescued via helicopter), same thing only slicker.

It’s when Brendan makes his escape that we see the bond continue to develop with JR, and he teaches him the ropes of being a good thief as well as teaching him a few life lessons along the way.  It’s a formula we’ve seen before, but it is a formula that works, and in this film writer/director Julius Avery knows how to deliver the action beats stringing the viewer along for this intriguing yet recycled plot.  By the time we get to the gold heist I was sucked in, because the performances are just that good, that they manage to make this rehash seem fresh and even exciting at points.

What works best is the relationship that develops between JR and Tasha (Alicia Vikander).  The two have a great onscreen chemistry together, and though we know she is going to become the wedge that is forced between JR and Brendan, we forgive it because the performance manages to even seduce the viewer, and we can easily see the draw she has over JR, and we can’t blame him for being smitten with her.

This is one of those films where I watch it and I wonder why this didn’t get played with a wider release considering how some of the other bad films are being treated these days.  It’s sad when an unfunny film about a mall cop can get a release of 2-3 thousand screens, yet Son of a Gun didn’t even get a percentage of that number of screens.

Even without the action sequences, the relationships JR has in this film are compelling and would make for good cinema.  The crime element in the film simply adds another appealing layer to a film that already had some well-crafted characters.  What was missing is that we never get to see JR in any great amount of drama, and because of this we see his character slowly and tightly evolve, but there is never a truly defining moment that hits the audience where we can fully side with JR over Brendan at any given time.  Sure, Brendan is more the criminal with a heart of gold, but as the film progresses, an argument can be made that JR seems to do nothing but complicate the situation that they have all gotten themselves into because of his feelings for Tasha.  Yeah, we see that the girl will come between the duo, but the direction the film takes still is fun and makes way for a satisfying ending.

What works best is during each segment of the film it plays out as its own isolated film, all while unfolding with Australia as the backdrop.  It’s a world filled with criminals, low-lifes, and crooked politicians, and everyone is just doing what they can to survive.  With some well-crafted characters and a plot that keeps the momentum going, Son of a Gun is a film that deserves to be seen and marks the start of a career for a writer and director who shows a lot of promise in his first feature.

Son of a Gun is presented in a 2.40:1 aspect ratio. The 1080p image is arrived at with an AVC MPEG-4 codec at an average of 20mbps.  Overall there is a warm color palette throughout the picture as well as a sharpness that allows us to see the detail of these sweaty brows.  There seems to be little in the way of image manipulation, and we get a very natural look to the film for the most part.  When we are around Tasha the film starts to bring a more “exotic” look between the club she works at to the beach sequence.  This is a nice-looking transfer with no artifacts or compression issues.

The DTS Master Audio 5.1 mix is immersive while the film takes us to various locations.  The action sequences like the heist and prison break utilize the surround speakers, keeping the viewer at the center of the chaos.  With a somber score carrying the film along as well as a well-designed sound mix, this comes together for an impactful audio track.

Audio Commentary:  Writer/director Julius Avery goes solo for this audio track, and though I have to admit being on his own the track had me nod off a few times. That’s the trouble with solo tracks; the same constant narration for so long can sometimes work as a lullaby, though the bright spot is that sprinkled through the track there is some quality information he dishes about how the story came together as well as getting the film made.

Partners in Crime: Behind the Scenes of Son of a Gun: (12:55) A standard behind-the-scenes feature where we get a few interviews with the lead actors as well as the writer and director. Considering this is the only bonus material, I’m disappointed with what we get considering there are numerous action segments this could have explored as well as simply the process of shooting in Australia.

It also comes with a digital copy of the film.

This is one of those hidden gems that get overlooked in the glut of there being so many releases out.  It’s been a while since McGregor has been this good and reminds me of the days when he was smooth and cool working with Danny Boyle.  If you want an action film with some characters you can care about, this is worth checking out. Side note: this would work awesomely as a double feature with the old Tim Roth film The Hit.

Brent Lorentson is a horror writer and film critic based out of Tampa, Florida. With a BA in Digital Film, he co-wrote and co-directed Scavenger Hunt. His short stories have appeared in various horror anthologies. In 2019 his short script Fertile Blood will be a part of the anthology horror film Slumber Party. He is currently working on his first novel A Dark and Secret Place set to be released in late 2019. Favorite Films: Taxi Driver, Fight Club, I Saw the Devil, The Wild Bunch, Dawn of the Dead, A Clockwork Orange, Pulp Fiction, Heathers, The Monster Squad, and High Fidelity.
Bank$tas Exclusive Interview With Bryce Draper Of Muck