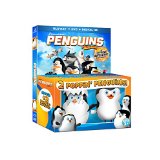 “Antarctica, an inhospitable wasteland, but even here, on the Earth’s frozen bottom, we find life. And not just any life: penguins. Joyous, frolicking, waddling, cute and cuddly life. Look at them, tumbling onto their chubby bum bums. Who could take these frisky snow-clowns… seriously?”

This one has been a long time coming. I like the Madagascar movies and have been fairly positive about them in these pages. Each time I pointed out that the highlight of these films were the antics of those military-minded penguins and their grand schemes. The film’s powers that be have also noticed this, as the penguin characters have been trending with more screen time as the franchise went along. Now those flightless maniacs have finally gotten a film of their own, and dare I say it, The Penguins Of Madagascar are flying higher than the source films with this frosty little tale.

We go back in time just a little and find out how three of the characters finally met up with the youngest ion the group. That would be Private (Knights). It’s a little farce on March Of The Penguins that you had to see coming. It’s funny just the same. They have been looking over him since he hatched out thanks to their heroics. The four have been a team ever since. The leader of the pack is Skipper (McGrath) and he is the drill sergeant/father figure of the team. Kowalksi (Miller) comes up with the plans and operates as the brains of the outfit. Rico (Vernon) brings up the rear as the explosives expert on the team.

After our little flashback we see some of the events from Madagascar 3: Europe’s Most Wanted from the perspective of the birds. But fear not. This is not just a rehash of those events. They merely lead into the film’s own story. From those events they decide to break into Fort Knox, but it’s not for the gold. It’s because they have a vending machine which contains the last bags of Cheese Dibbles. (I know a little bit about going to great lengths for the last of a discontinued product.) They are captured, but not by the feds. It’s Dave (Malkovich) or better known in the criminal world as Dr. Octavius Brine. He’s a octopus with a heavy grudge against penguins. He has developed an ooze that turns living creatures into mutated monsters. It appears that he has made the rounds of many zoos where he was the star aquatic attraction until penguins came along and stole the attention of the audience with their cuteness. Now he’s birdnapping every penguin in every zoo or aquarium and is going to kill their cuteness with his ooze. He intends to release them on an unsuspecting world where they will no longer be “cute”. It’s not just zoo penguins they have. They have Private, and the penguins are determined to save the day. Private may appear down for the count, but he’s going to prove himself more than just the team’s mascot as he works to bringing Dave’s plan down from the inside.

“The North Wind is an elite undercover interspecies task force dedicated to helping animals who can’t help themselves, like … penguins.”

Along they way they encounter an organization called The North Wind. They are an M-6-like organization of Arctic animals who save the world. They’ve got all kinds of contraptions and cool toys to do the job. They’re led by Classified (Cumberbatch). It’s not his real name, of course but Skipper misinterprets him, and that’s who he is now. You see, when Skipper asks for his name, he tells him it’s classified. I’m sure you see how that worked out. He’s a wolf. Corporal (Stormare) is a polar bear. He carries the heavy guns. You could say he’s loaded for…well.. octopus. You thought I was going to say bear, didn’t you? Eva (Mahendru) is an owl with a crush on one of the boys. She’s a Russian agent who runs the intel branch of North Wind. Short Fuse (Jeong) is the seal with the know-how to blow stuff up. Together they reluctantly team up with the penguins to stop Dave and his Medusa Serum.

All of the original voices are back as the penguins. We get a couple of huge star voices for two of the new characters. Dave is voiced by John Malkovich and Classified by Benedict Cumberbatch. Both add some serious star power to this film to help you to understand this isn’t just some silly spinoff movie intended to keep your interest going between “major” movies. Unfortunately, that is so often the case, and I suspect that many of you avoided this one just because your expectations weren’t very high on this one. That is, unless you’re a big fan of these guys like I am. Check it out and you’ll be rewarded with lots of fun and an entertaining romp for both adults and kids.

Yes, there’s some of the usual toilet humor for the kids and immature adults. But the film is actually clever and injects some more sophisticated spoofs and jokes for the adults. I also like the constant use of word play in this film. Much of it has to do with famous names. These gags use these names within a sentence structure. For example: “Helen, hunt them down”, “William, hurt them”, or “Nicolas, cage him”. Jokes on the other side of the coin still live in that word play style. No one breaks the Wind. For the most part, however, most of the humor is in the characters, and that’s the kind of lasting thing that will make this one worth putting up on your shelves.

The Penguins Of Madagascar is presented in its original aspect ratio of 1.85:1. The 1080p image is arrived at with an AVC MPEG-4 codec at an average 30 mbps. The computer animation is pretty well done, and the high-definition image presentation doesn’t let the movie down. It’s a bright and sharp image with plenty of jump-off-the-screen colors. Detail can be found in the likes of Cheese Dibble dust on characters. Water looks impressive, and it’s one of the hardest things to get right. Black levels are awesome. There’s a lot of white in this film, and it does not serve to wash the screen or bleed into the other colors. These are penguins, after all, and contrast of the black and white makes the characters pop.

The DTS-HD Master Audio 7.1 is the kind of thing that always gives you something going on around you. It might be wind or it might just be the shuffling of feet. Most of it is subtle, and that works just fine. Dialog is punchy and cuts right through everything. There’s a pretty solid sub level going on here as well.

It’s unfortunate that all of the extra features are fluff. They only last a couple of minutes and work really as fluff pieces for the film’s promotion. There’s not any in-depth behind-the-scenes stuff here. Music video and collections of clip montage features. One deleted scene and the rest is complete tediousness. It’s not worth the clicks on the remote it takes to get through less than 20 minutes of stuff.

This edition makes up for the less than stellar lineup of bonus features with a couple of toys I’ll be displaying in my own theater. You get two wind-up toys. One has Private popping out of his egg. The other has him waddling about.

I’m hopeful that there will be more feature films with the Flightless Fab Four on hand to take the lead. It did not pull in nearly the box office of any of the Madagascar films. They all returned numbers around $200 million domestic and about a half billion worldwide. In contrast this film didn’t break $90 million here and only half the international money of the Madagascar films. Unfortunately, this one didn’t cost much less to make. I’m hopeful that the home video sales will show a market for these little guys. “It can be our thing.”

Gino Sassani is a member of the Southeastern Film Critic's Association (SEFCA). He is a film and television critic based in Tampa, Florida. He's also the Senior Editor here at Upcomingdiscs. Gino started reviewing films in the early 1990's as a segment of his local television show Focus. He's an award-winning recording artist for Omega Records. Gino is currently working on his 8th album Merchants & Mercenaries. Gino took over Upcomingdiscs Dec 1, 2008. He works out of a home theater he calls The Reel World. Favorite films: The Godfather, The Godfather Part II, The Body Snatcher (Val Lewton film with Karloff and Lugosi, not the pod people film), Unforgiven, Gladiator, The Lion King, Jaws, Son Of Frankenstein, The Good, The Bad And The Ugly, and Monsters, Inc.
A MusiCares Tribute To Paul McCartney (Blu-ray) Reviewers Wanted: Join The Upcomingdisc Family