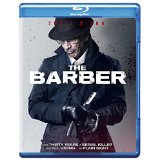 “It’s the guy next door, guy who sits too close in the theater, maybe even at church. Plain, ordinary, the everyday man. That’s the guy they should be afraid of. ‘Cause they never see him coming.”

Or maybe the friendly neighborhood barber. Max Enscoe’s screenplay for The Barber appears to touch on those fears. We’ve all seen those interviews with neighbors and friends after a particularly heinous killer is finally caught. He was quiet. Always went to church.

If you look at the cover art you might expect that The Barber is a poor man’s Sweeney Todd. I certainly expected to see some bloody razor action. That’s not what you’re going to get here. There really isn’t even that great a number of deaths to be found at all. Instead to get that subtle journey deep into the character of a killer. You get a wonderful character study that doesn’t need to shock you with its visuals. Director Basel Owies trusts his material, and he trusts his audience enough to stay true to that vision. No cheap tricks or scares here. And that’s why this is a pretty solid film.

Twenty years ago a detective was on the trail of a serial killer. He couldn’t bring him down within the law, so he planted evidence. Unfortunately, he got caught, and the killer went free. Unable to live with his mistake, he kills himself with his young son in the house.

Jump to the present, and John (Coy) shows up in a small town where Eugene (Glenn) has been a local barber for many years. It’s the kind of place where everybody knows everyone else’s business. John confronts Eugene telling him he knows who he really is and wants him to train him to do what he does, and we’re not talking about cutting hair. As the relationship continues, we’re given clues that both are not who/what they appear to be. There’s deception on both sides, and where it will lead is the journey the film brings us along for the ride.

The film plays out as almost a primer on serial killing. Eugene puts John through a series of tests and exercises that we soon discover have a dual purpose. It wouldn’t be fair to reveal any of the twists and turns here, but I’d advise you to pay strict attention to the interactions between Eugene and John. There are some clever things going on here that almost pay off in the end.

Scott Glenn is the key to keep that ride on track. It’s amazing to me how much he downplays this character. He does such a great job with the subtle stuff that he manages to truly surprise you at moments. We’re not talking cheap jump scares. Glenn pulls you completely into this character and commands your attention with more quiet instead of rage. There are a few twists in the film, and it’s Glenn’s control over your attention that pays it off when they come. Much like a real serial killer, there’s a hypnotic and calm quality to Eugene. It might not satisfy the gore fans who were hoping for that bloody razor. It will satisfy film fans who love to watch a great performance, particularly in a place they weren’t expecting to find one.

Unfortunately, the same can’t be said for Chris Coy, who plays John. It’s not that he gives us a horrible performance. There’s just not a lot of believability there. Unlike Glenn, it’s hard to get sucked into his life, and I can’t very much say I’m not rooting against him. There’s a throwaway girlfriend who comes looking for John. While she sort of plays a key role in the climax, it’s a character who doesn’t appear to fit in the puzzle somehow. It’s almost as if Owies lost his faith for just a minute and covered his bases by trying to make the film fit the expected mold. In the end, the finale isn’t a huge payoff and feels quite anti-climactic. It’s too bad, because the ride was better than the destination.

The Barber is presented in its original aspect ratio of 2.35:1. The 1080p image is arrived at with an AVC MPEG-4 codec at an average 35 mbps. There’s a lot of depth to this high-definition image presentation. There are moments where the film almost reaches a 3D look. The cinematography is good at creating this illusion through focus or forced perspective of objects rather than people. I found it quite interesting how these flourishes created such a detailed field of vision. Unfortunately, the color palette is intentionally dreary, and I don’t see a lot of texture in the detail. Perhaps that was sacrificed for the amazing depth. The black levels suffer pretty much here, offering a rather murky darkness with little solid definition.

The DTS-HD Master Audio 5.1 is mostly there to serve the dialog, particularly the conversations between John and Eugene. That doesn’t mean we don’t get some rather nicely done surround elements that help with the immersion a bit. That important dialog might require the occasional strain to hear. It’s not a presentation problem, but rather Glenn’s often soft-spoken delivery that might cause you to miss a beat here or there. I just wish there had been more balance, but inconsistency rules the day here.

The small town setting is used to great effect here. It only capitalizes on those haunting reminders that these killers can appear as normal as anyone else. For me, that’s particularly effective in a small town. It’s all wonderfully effective here until the final moments. I have come to believe that ending a film must be the hardest thing to do right, because this is where so many good films go wrong. You can’t please everyone, and when you try, “I’m not going to soft-soap it for you….you failed.”

Gino Sassani is a member of the Southeastern Film Critic's Association (SEFCA). He is a film and television critic based in Tampa, Florida. He's also the Senior Editor here at Upcomingdiscs. Gino started reviewing films in the early 1990's as a segment of his local television show Focus. He's an award-winning recording artist for Omega Records. Gino is currently working on his 8th album Merchants & Mercenaries. Gino took over Upcomingdiscs Dec 1, 2008. He works out of a home theater he calls The Reel World. Favorite films: The Godfather, The Godfather Part II, The Body Snatcher (Val Lewton film with Karloff and Lugosi, not the pod people film), Unforgiven, Gladiator, The Lion King, Jaws, Son Of Frankenstein, The Good, The Bad And The Ugly, and Monsters, Inc.
Black Or White (Blu-ray) Exclusive Interview With Chad Archibald – Writer/Director Of The Drownsman