Posted in: Disc Reviews by Archive Authors on May 12th, 2015 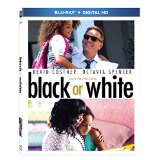 There are certain things that are obvious to some of us, and nobody wants to talk about them. All people are full of weaknesses that they then try to deny exist. People are people, but some people think they are better than other people. It seems obvious that we should all try to get over our hatred and be more accepting of all our differences and see how much alike we all are. Black or White is an important movie that comes in the form of a fun and heartwarming melodrama. The movie navigates through very murky and unexplored waters and comes out the other side triumphantly. There is no reason that these waters are unexplored except for the fact that everyone thinks everyone else is racist but never looks at themselves. There is lots of very ugly and violent racism, and then there is subconscious racism. The subconscious racism is harder to deal with.

Most people are guilty of this, because we all tend to put ourselves in smaller and smaller categories.

We are part of a religion or a nation or a race or a family, but rarely do we simply say we are part of the human race. Anyone who just tries to accept other human beings as just human beings usually runs into all the anger that comes with people who define themselves by narrower categories.  If you are a person who isn’t racist, you still encounter all the anger that racism has created, and almost no one is free of it.

Black or White is unassuming in many ways. It plays as a simple family dramedy but also doesn’t try to make too many assumptions of who we are and how we are supposed to be. It is a film that is wise, provocative, and subversive, but not in the ways we are used to.

Black or White starts with a man in grief, Elliot Anderson (Kevin Costner), who deals with it through alcohol. His wife has died, and through ghostly images we can see he adored her. Black or White is about grief and ghosts and finally getting over it. He has already had to deal with the loss of a 17-year-old daughter. When he wakes up hung over in the morning, he has to face the world and the fact that he has to take his granddaughter to school. She is an adorable child and the one person he loves in the world. He obviously adores this child. He’s a rich white man, and the grandchild is black. There isn’t a second that we don’t feel how much he loves his granddaughter. Elliot is taking time off as a partner at a law firm to deal with his grief and to take over the duties of raising the child that had been his wife’s main occupation. But then the funeral brings Elliot together with the child’s other grandmother, Rowena Jeffers (Octavia Spencer). Rowena slowly starts to make the case that Elliot will not be able to take care of the child, especially after he goes back to work. This leads to a custody battle in court with high-powered lawyers on both sides who happen to be directly related to each side. It also brings the drug-addicted father back into Elliot’s life. Both men think they control their addictions, but the film makes it very clear they are equally blind to their own problems.

The cast is terrific all around including great parts for Bill Burr, Anthony Mackie, Paula Newsome, and Andre Holland. I also have liked writer/director Mike Binder’s previous works including Upside Of Anger with Costner and Reign Over Me, maybe Adam Sandler’s best film. Binder again gets a spectacular performance out of Costner.

Black Or White is presented in its original aspect ratio of 2.40:1. The 1080p image is arrived at with an AVC MPEG-4 codec at an average 30-35 mbps. The high-definition image presentation provides a very natural look. There’s little in the way of stylish color correction which is a bit of a relief these days. The image maintains a sharp look with close-ups providing particularly nice detail. Black levels are nice, adding to the natural design of the image. There are moments when the image appears a little over-bright. The setting is supposed to be southern California filmed in New Orleans. I suspect there might have been an attempt to accentuate the exterior brightness to cover some bets.

The DTS-HD Master Audio 5.1 is dedicated to the dialog entirely. There are some nice musical moments and a couple of ballads. They are dynamic and pretty much crystal clear. Surrounds are used strictly for enhancement, as is appropriate with this kind of piece.

Shades Of Gray – The Making Of Black Or White: (23:54) If you find yourself, as I have, wanting to call this film Black And White, you’ll be relieved to know that was the shooting title and how the cast and crew refer to it here. This is mostly a love-fest collection of cast and crew comments about how wonderful everyone else is here.

Promotional Featurettes: There are two, and they run a couple of minutes. We’re talking basically trailers with a few interview clips.

I’m going to reveal that the film has a fair degree of conflict, but it all works out in the end in the obligatory happy ending. Some people might feel that the film tries to paint an easy resolution to the almost impossible tragedy of racism in this country, but it is by design. Black or White means to show that it is possible that we can get over it. We can get over all the things that plague us from the past, including the ghosts and the grief. It ends with Costner assimilated and happy in the end credits. I’m not ruining it for you. I’m giving you hope.