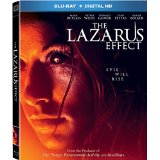 “There’s always a consequence for breaking the rules.”

Maybe that’s why the crew from The Lazarus Effect decided to use all of the rules and conventions in the book without daring to really break any new ground of its own. By the time I was finished with the film, I felt like I had watched several horror movies at the same time. It’s most intentionally Frankenstein meets Flatliners meets insert-your-favorite-ghost/possession-movie meets every-Stephen-King-film-ever-made. With all of that at its fingertips and a pretty bright cast, all The Lazarus Effect could do was raise itself to mediocrity.

Medical student Frank (Duplass) and his fiancée Zoe (Wilde) have been working on a process that would allow patients to be resuscitated after prolonged periods of “death” to give surgeons the much-needed time to save lives. The process utilizes their Lazarus Serum and an electrical combination that resembles some kind of medieval torture chamber device. They are assisted by hippie wannabe Clay (Peters), who thinks he’s cool puffing on an e-cig. There’s also Niko (Glover), who is the requisite tech genius. They are joined by newcomer Eva (Bolger) who is hired to video the breakthrough.

Of course, they start with a dead dog. Soon they discover their process does much more than they anticipated. It brings living things back from the dead. They get discovered performing the unsanctioned experiments and are about to be taken over by a big Pharm company headed by the always-devious Ray Wise. Predictably, they decide to hurry along the research before their stuff is stolen, and there is the expected accident that deep-fries Zoe. If you don’t know what’s coming next, you haven’t seen near as many horror movies as the rest of us have. They bring Zoe back, but she’s not quite the same. As Fred Gwynne once told us, “Some things should stay dead.”

What begins as a story with incredible potential never takes flight, because no one involved was willing to take any chances. Sure, they’ll tell you they’re exploring the whole life after death vs. religion themes, but they’re doing so with the same cliché dialog and having characters make the arguments. Instead the film should have had us making those arguments. Again, the fear here isn’t the shadow in the dark. It’s the fear of really taking chances. We end up with a film that relies on the same standby jump scares and deadpanned creature moves. Yeah, it’s fun. But if you get the feeling you’ve seen it all before, it’s because you absolutely have.

The movie also fails to tighten up the typical mistakes that teens in slasher films always seem to make. When the dog is revived, Frank and Zoe think nothing of bringing it home to their apartment. Only later does a character suggest that might not be a smart idea. You get the same characters wandering in the darkness. You just know they’re going to get killed. Zoe’s demise occurs when she “forgets” to put on her gloves before handling the kazillion-volts handle. And these guys are med students. Now I’m more afraid of my next visit to the hospital.

To be fair, there are some spooky and atmospheric moments. Most of the horror stuff takes place in the claustrophobic confines of the lab. Alien, anyone? You have to credit the rather effective use of those cramped quarters and a production design that really does help with the jump scares.

I also have to give some credit here to Olivia Wilde. It’s a different kind of film for her, and I think she and her fellow cast-mates were the only ones on the production willing to take a risk. I don’t feel any of the chemistry between her and Mark Duplass. Just never bought them as a couple at all. To make things worse, you could tell the actors weren’t really that comfortable with each other. Without that connection, everything that follows is just a bit hard to believe. It’ll make a fine rainy day rental or a cheap date.

The Lazarus Effect is presented in its original aspect ratio of 2.40:1. The 1080p image is arrived at with an AVC MPEG-4 codec at an average 35 mbps. The high-definition image presentation is able to create many vivid images with its fine detail. There’s quite a range of source footage here as well as lighting conditions so that only such fine detail keeps this from being a total mess on your screen. Instead we get just what we need to ride along with these nice little changes in texture and light. Black levels aren’t quite so inky black, but they do provide enough shadow definition to maintain the required atmosphere. Without it the jump scares would be wasted, and that’s pretty much the film, guys.

The DTS-HD Master Audio 5.1 is a bit of a distraction at times. We go from quiet, heavy dialog work to that clunky high-bass noise used to artificially create a jump or scare. If you have to rely on those tricks, you’ve missed the boat entirely. The dialog does cut through, and yes, the sub delivers well on those clunks. I’m just not sure that’s what I want in my horror movie. Your mileage may differ.

Creating Fear – The Making Of The Lazarus Effect: (14:27) This is an above-average making-of piece. There’s plenty of behind-the-scenes footage along with the typical cast and crew sound bites. But there’s a bit more. There’s a lot more put into the thoughts behind the film here than I’m used to getting in 14 minutes.

Playing God – The Moral Dilemma: (7:45) Here we see the argument for the experiments here from a wealth of angles. There’s a scientist who is actually engaged in this kind of research. There’s a priest and a medium. Give them credit for exploring all the angles here. It’s a rather interesting debate.

Want to watch a Stephen King marathon in just under 85 minutes? The Lazarus Effect is just your ticket. We’ve got Cujo, Pet Sematary, Firestarter, Dreamcatcher, Carrie, and even some The Shining thrown in there for good measure. If that’s your goal, this one will be a wonderful time-saver. If you’ve got the time, read the books. I don’t see this one being remembered for too long. Unfortunately, studios are sometimes like mad scientists and try to resurrect a dead film that should have stayed dead. Attempting to run a sequel here “could be considered questionable”.

Gino Sassani is a member of the Southeastern Film Critic's Association (SEFCA). He is a film and television critic based in Tampa, Florida. He's also the Senior Editor here at Upcomingdiscs. Gino started reviewing films in the early 1990's as a segment of his local television show Focus. He's an award-winning recording artist for Omega Records. Gino is currently working on his 8th album Merchants & Mercenaries. Gino took over Upcomingdiscs Dec 1, 2008. He works out of a home theater he calls The Reel World. Favorite films: The Godfather, The Godfather Part II, The Body Snatcher (Val Lewton film with Karloff and Lugosi, not the pod people film), Unforgiven, Gladiator, The Lion King, Jaws, Son Of Frankenstein, The Good, The Bad And The Ugly, and Monsters, Inc.
The Forger (Blu-ray) Upcomingdiscs Talks With Robert Davi From Awaken