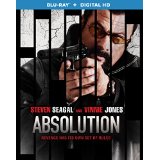 Those words are spoken by elite contract killer John Alexander at the start of Absolution, a straight-to-DVD offering that is largely cobbled together from the spare parts of other junky action flicks. The film stars Steven Seagal, who was a very bad man on-screen during his early ’90s heyday. John wants to do one good thing before his time is up; coincidentally, all I want is for Seagal to make one action movie that at least comes close to recapturing the spark that made him a star. Absolution is not that film.

This is actually Seagal’s third time playing John Alexander, following 2013’s Force of Execution and 2014’s A Good Man. It has resulted in lots of dead bodies — mostly anonymous, vaguely Eastern European henchmen — which explains the character’s desire for absolution. This time around John is tasked by shady government handler Van Horn (Howard Dell) with taking out a would-be Afghani terrorist who is hanging out in the Ukraine. John and his right-hand-man Chi (Byron Mann) embark on the mission, but they eventually run into a complication. A young woman named Nadia (Adina Stetcu) has escaped the clutches of a powerful, sadistic mobster known as The Boss (Vinnie Jones) and run into the reluctantly protective arms of John and Chi. The anti-heroic duo defy The Boss’s orders to hand over Nadia, which puts John and Chi in the crosshairs of the mobster’s entire criminal syndicate.

Absolution is illogical and clichéd in an almost charmingly throwback way. (Van Horn actually says, “We’ve got a situation…” without a trace of irony when he calls John in at the beginning of the movie.) The lack of irony extends to the moment early on where John and Chi walk away from an explosion in slow motion, a move that has been thoroughly lampooned. To me, it’s an indication that this film has been made by someone who loves action movies…but also nothing original to say.

The director is Keoni Waxman, and this is his sixth(!) collaboration with Seagal. (They’re like the Bizarro Scorsese/DeNiro.) Absolution actually opens with a fairly harrowing sequence showing the sadistic Boss brutalizing a then-unknown woman. These scenes are quite effective, and they make me think Waxman might have a future in the horror genre. (Or at least directing episodes of Criminal Minds.) Unfortunately, the moments of ineptitude easily outweigh the glimmers of potential. Waxman, who also co-wrote the script with Richard Beattie, unnecessarily pads the film’s 96-minute running time by showing John’s “absolution” speech and Nadia’s escape from The Boss’s torture dungeon two times each.

Most of the fight scene heavy lifting is actually done by Mann, who proves to be a scrappy, dynamic action hero and a surprisingly charming presence. (He also has decent chemistry with Seagal; the two have now appeared in three movies together.) Jones — who must be on track for some sort of “Straight-to-DVD Junk Lifetime Achievement Award” — puts his charming menace to decent use here, especially in the scenes where he’s terrorizing his female victims. He’s actually got the proper stature and presence to face off with Seagal, but doesn’t really get the chance. Stetcu’s obviously not winning any awards for her performance, but the actress deserves a medal for the icky/awkward kiss she shares with Seagal.

It’s hard to say Seagal is mailing it in these days because he’s always used the same unaffected whisper he deploys here to deliver his lines. And even though Seagal is now 63 years old and looks like he ate the younger Steven Seagal — his signature all-black wardrobe is intact, but doesn’t prove to be very slimming — it’s no spoiler to say his character dispatches all his enemies with wildly efficient ease and is never in any real danger, which drastically reduces the dramatic stakes. (I’ll never understand why the bad guys in Steven Seagal movies always insist on challenging him to hand-to-hand combat; it’s almost as if they don’t realize they’re in a Steven Seagal movie.)

Yes, Absolution is ultimately a Steven Seagal vehicle, which means it’s pretty much exactly like every other movie the action star has made over the course of 25 years.

Absolution is presented in an aspect ratio of 1.78:1. The 1080p image is arrived at with an AVC MPEG-4 codec at an average of 21 mbps. A significant portion of the film takes place at night or in darkened nightclubs, so I’m happy to report that black levels here are solid and feature good separation. (Could’ve been inkier in spots, but they certainly get the job done.) The slightly desaturated torture sequences also have a stark, sharp quality that recalled the first Saw. Overall, this is a slick, clean and modern HD presentation that even manages to feel warm and pleasant when the action spills over into the daytime. This is actually quite a strong effort effort from Lionsgate; it’s almost too good for such a cheesy action flick.

The DTS-HD Master Audio 5.1 track is a little (over)eager to fill in any quiet spots in the action. (The subs rumble to life pretty regularly — and sometimes randomly — to help punctuate the thriller score.) That being said, the activity in the rear speakers is surprisingly understated yet effective in providing a sense of immersion. (Particularly during any scene in the nightclub and for a key sequence at a restaurant.) Dialogue is served well throughout and never gets drowned out when the action picks up. Those action sequences — whether they’re shootouts or mano-a-mano fights — pack an appropriate oomph, which is the most important thing.

Commentary with co-writer/director Keoni Waxman, actor Josh Barnett, and producer Binh Dang: As soon as you hear the trio mock the various production company logos, you know you’re in for a pretty jovial track. It’s a relief to hear they’re in on the joke, given that the film doesn’t exactly inspire deep conversation. Highlights include the trio making fun of Mann’s penchant for Chapstick and Barnett asking about a dropped storyline involving the death of a character’s aunts. (Waxman essentially shrugs it off.)

Behind the Scenes of Absolution: (15:01) Pretty standard “Making of” featurette where the cast and crew discuss the plot of the film. We learn there was an effort to give each of the movie’s fights its own personality. (Now if only that same effort had been extended to the characters themselves.) Stetcu also talks about watching a few documentaries about human trafficking to prepare for the film, which really is more character work than anyone who’s about to appear in a Steven Seagal movie should do.

Cast Interviews: (47:01) Includes chats with cast members Seagal, Mann, Jones, Stetcu, Dell, Barnett, and George Remes. Mann and Barnett, a mixed martial artist-turned-actor, prove to be the liveliest contributors. You can use your chapter skip button to go from one cast member to the next.

By now, you know precisely what you’re going to get from a Steven Seagal film. Absolution is no exception.

You can probably tell by now that I had some smart-alecky fun writing this review. It’s honestly not meant as a sign of disrespect for the non-Seagal folks who worked hard on this film; I just think the best chance you have to enjoy Absolution is to not take it very seriously.