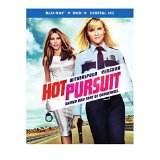 I realized Hot Pursuit was in big trouble during the sequence when intensely by-the-book Officer Cooper (Reese Witherspoon) accidentally ingests cocaine. The joke is supposed to be that the drug sends Cooper into a comically manic, frenzied state; the problem is the way Witherspoon behaves during this sequence isn’t all that different from the way she’s played Cooper up to that point. And that’s the problem with Hot Pursuit: it’s the movie equivalent of someone who types in ALL CAPS all the time. Even worse, it’s an unholy (and unfunny) mash-up of Midnight Run and Thelma & Louise that shines a blazing spotlight on its leading ladies’ worst qualities.

As I mentioned before, Witherspoon stars as Cooper, who idolized her legendary cop father and always dreamed of following in his footsteps. When we meet Cooper, however, she’s comically disgraced her father’s good name — we’re meant to believe no one ever told her what “calling shotgun” meant — and is stuck working as a glorified secretary in the evidence room of her Texas police department. She gets a stab at redemption when her captain (John Carroll Lynch) assigns her to accompany a U.S. Marshal (Richard T. Jones) to escort and protect a drug cartel informant and his wife Daniella (Sofia Vergara).

Shortly after Cooper and the marshal arrive, they are ambushed by two sets of killers. The cartel informant is killed and Cooper is left alone to protect his high-maintenance, abrasive wife, who wasn’t exactly thrilled to be leaving her extravagant life behind. Cooper resolves to carry out her duty and escort Daniella to Dallas so she can testify. Of course, a series of complications — including the fact that Cooper has been framed for murder, which turns them into fugitives — means the duo has to dodge both the police and the cartel…assuming the mismatched pair don’t kill each other first.

As you can see, this is pretty standard buddy cop/road movie stuff. These stories always lean heavily on the chemistry between the leads, which can absolutely elevate substandard material. On-screen chemistry, of course, is famously tough to predict. Co-stars can hate each other and still make movie magic. At the other end of the spectrum, actors who have off-screen heat can’t always carry it over to their on-screen work.

I actually feel like Witherspoon and Vergara had potential as an odd couple. The pair of them just look funny together, and the movie bludgeons us with jokes about undersized Cooper’s tomboyishness and Daniella’s cougariffic bodaciousness. The newscasts that consistently diminish Cooper’s height and increase Daniella’s age are actually one of the movie’s few highlights. Unfortunately, that’s pretty much where the laughs end, unless you’re a huge fan of pratfalls (Witherspoon) and obnoxious wailing (Vergara).

“Drives me crazy the way you talk.”

With this film, Witherspoon follows up one of the best performances of her career with one of the worst. Cooper exhibits the uptight, off-putting eagerness of Tracy Flick without the sharp, Oscar-nominated writing of Alexander Payne and Jim Taylor to back it up; she’s got the indomitable spirit of Elle Woods without any of the winning charm. Vergara is even worse. Her shrill work here confirms everything that people who don’t actually watch Modern Family — and don’t realize the actress has a deft comedic touch — assume is true about Vergara. One of the recurring themes in Hot Pursuit is that people assume Daniella is dumb because of her sexpot looks and broken English. The script by David Feeney and John Quaintance doesn’t do the actress any favors by having almost all her punchlines center around her body or dopey malapropisms. (“I am a sitting goose out here.”)

I suppose director Anne Fletcher (The Proposal, 27 Dresses) deserves credit for at least keeping the action moving here. (Hot Pursuit mercifully clocks in at a mere 87 minutes.) But those brownie points are deducted because of the rushed pacing that doesn’t really allow any of the comedic set pieces to develop. Talented comics like Mike Birbiglia and Jim Gaffigan show up and disappear before they’ve really had a chance to do anything funny. The one cast member who comes out of this thing relatively unscathed is Robert Kazinski as the handsome, impossibly chivalrous ex-con who captures Cooper’s attention.

Hot Pursuit had the potential to be an effective bit of comedic counterprogramming during noisy summer movie season. That’s why it’s so disappointing to find this may have been the loudest, dumbest movie of them all.

Hot Pursuit is presented in an aspect ratio of 2.40:1. The 1080p image is arrived at with an AVC MPEG-4 codec at an average of 25 mbps. This Texas-set flick offers a warm, pleasing, sunny palette that is presented quite cleanly in this Blu-ray from Warner Bros. The bursts of color — mostly courtesy of Vergara’s wardrobe, shoes, and the dress that Witherspoon’s character changes into halfway through — are appropriately sparkling. There is good detail throughout in this blemish-free image, and black levels are inky while exhibiting solid separation. The latter is especially on display during the nighttime sequence where Cooper and Daniella use a deer carcass to slip by the authorities. (Don’t ask.)

I suspect the DTS-HD Master Audio 5.1 track isn’t to blame for the lack of subtlety and nuance in this presentation. In fact, it’s actually quite appropriate considering the complete lack of subtlety and nuance in the rest of the film. Given the film’s title, it’s no surprise the track is most alive when Cooper and Daniella are on the road. There’s some nice directionality with the sound of revving engines traveling across all speakers. The track also offers some impactful pops whenever gunfire breaks out. There’s not much sub activity to speak of, but the dialogue is always clear and fidelity is pretty spot on in this busy track.

The Womance: (3:05) Purportedly examines the on-screen chemistry between Witherspoon and Vergara, but it’s really just a highlight reel of the two co-stars goofing off. (Director Anne Fletcher joins in on the fun too.)

Hot Pursuit — Say What?: (3:46) Another glorified highlight reel, this one showing Vergara mangling her dialogue — she has an interesting take on the word “hemorrhage” — and Witherspoon stumbling through the one scene where Cooper speaks Spanish.

Action Like a Lady — Gag Reel: (2:26) It says “gag reel”, but it’s really more of a behind-the-scenes look at the film’s stunts rather than the usual flubbed lines.

Alternate Ending: (1:28) This alternate ending doesn’t affect the story at all; instead, it checks in on pretty much all of the film’s supporting players. (Which gives people like Gaffigan, Birbiglia, and Lynch one last chance to riff.)

Even people (like me) who are fans of both Witherspoon and Vergara would do well to steer clear of this turkey.

Hot Pursuit could’ve been an amusing, harmless comedic distraction. But it’s even worse than a waste of these actresses’ talents…it’s an insult.

Exclusive Interview With Johan Hegg Of Northmen: A Viking Saga & Amon Amarth Tuesday Round Up: August 11, 2015