Posted in: Disc Reviews by Gino Sassani on September 9th, 2015 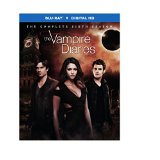 For most of our characters, the season begins pretty much in real time from the season 5 finale. There is a spell keeping magic out of the city limits of Mystic Falls, and that means no vampires or supernatural beings can cross into town. Elena is taking pre-med courses at college, mostly because it gives her access to the hospital’s blood bank. Stefan is supposed to be out looking for a witch powerful enough to bring back Bonnie and Damon after they were trapped destroying “the other side”. It’s an act that brought some others over from the dead, including now-vampire Alaric and Enzo. In reality, however, Stefan has given up and is working as an auto mechanic for 200 bucks a week. Jeremy is hitting the bottle because Bonnie told him she was going to die over the phone. Tyler is trying hard tot to reignite his curse that will once again make him a werewolf. It’s been a busy summer in Mystic Falls and its outskirts. And that’s just the beginning.

What is Mystic Falls? Who the heck are Damon and Elena, you ask? Bonnie? You’ve got questions. We’ve got answers, but not here. You’ve heard me say this before, and it’s become more and more true of television shows these days. If you don’t know what I’m talking about, you’re just not ready for season 6 of The Vampire Diaries. But you are in luck. You can check out my reviews for the four previous seasons here: Vampire Diaries Reviews. Then you can pick them up and start a mega-marathon session. Once you’re up to speed, join us back here for the next thrilling installment.

Elena has found a rather radical way to deal with the loss of Damon. She’s taking a drug that allows her to hallucinate Damon so that she can have conversations with him. It has a rather unexpected side effect. It makes her very hungry, and she’s stalking victims just on the border of Mystic Falls. Her solution to this is to have Alaric wipe away her feelings and memories so she doesn’t grieve over Damon. He’s pretty much like an Original vampire with extra-strong powers. He’s compelled himself a college teaching job. Everyone is trying not to give up on Bonnie or Damon, but time is passing, and they’re moving on with their lives.

Fortunately, both Bonnie and Damon are very much alive. They’re living in a world trap a powerful witch coven created to hold one of their own. That would be Kai (Wood). He was put there for trying to slaughter his family. It’s a Groundhog Day meets The Phantom Zone kind of place. It’s one of the better arcs of the season as we get to see the dynamic between Damon and Bonnie change. It’s some of the show’s best stuff with both Somerhalder and Kat Graham putting in some really solid and emotional performances. We’re also setting up the main story line here which features Kai’s witch coven. It turns out being twins carries a good news/bad news scenario with it. At a certain age you are expected to merge. The stronger twin survives to become the powerful coven leader, while the weakest gets absorbed and dies. This makes Kai the season’s big bad with mixed results.

This is one of those cases where the buildup is so much bigger than the payoff. While he gets some evil licks in, the Kai character never really has the charisma and diabolic nature we’ve come to expect from our big bads. Part of it is that actor Chris Wood just doesn’t carry the weight necessary. The other problem is that the wind seems to have blown out of the arc’s sails long before it gets bad. It’s almost as if the writer’s second-guessed themselves and stalled until they could come up with a good way out of the plot but never did.

If this isn’t the season for great stories it does pay off many of the characters. New arrival Jodi Lyn O’Keefe plays Dr. Jo Laughlin, and she becomes a love interest for Alaric, leading to a bloody wedding episode. She also supplies the strongest new character in a long time.

Matt gets a stronger character and the best evolution this season. He’s appalled to learn that a new community leader has been hunting vampires and dragging them across the town line to a torturous end. He sides with his vampire friends, only to begin doubting himself and going on a hunter crusade of his own. He starts to realize that human lives will always matter just a little bit less to the vampires and begins to change. It’s a Dances With Wolves moment that actor Zach Roerig pulls off better than Kevin Costner’s lame attempt.

There’s a new sheriff in town or at least there will be next season. There are several characters leaving the show this year. The one I’ll miss most is Sheriff Forbes, played by Marguerite McIntyre, who leaves the show with an emotional exit that will also send Carolyn on a ripper binge and give actress Candice Accola some very sweet things to play this season.

Elena, Tyler, and Jeremy are all leaving the show as well. I think it will only make the show better. The best moments were the brothers or Damon and Bonnie. I think the show runners are discovering new possibilities, and we’ve now seen the genesis of that play itself out.

There are a few Audio Commentaries on selected episodes. There are spoilers, so do not listen to them until you’ve seen the season through at least once.

Best Reactions Ever: (6:09) The cast read Twitter reactions to the season’s big moments. There’s a lot of humor here, and it’s short and sweet.

Good Bite And Good Luck: (13:30) A tribute to the departing characters/actors.

It’s not one of the best seasons for The Vampire Diaries. There are some wonderful character moments, to be sure, but the focus appears to be missing as story threads meander and get lost along the way. It appears possible that most of the resources have gone to The Originals, which absolutely shone this season. The show will have to change and find a new focus, or I expect the upcoming season to be the last. With so many characters departing there is a very good opportunity here to retool the show a bit. It’s my hope that we’ll see that soon as the seventh season begins. “Well…obviously.”

Gino Sassani is a member of the Southeastern Film Critic's Association (SEFCA). He is a film and television critic based in Tampa, Florida. He's also the Senior Editor here at Upcomingdiscs. Gino started reviewing films in the early 1990's as a segment of his local television show Focus. He's an award-winning recording artist for Omega Records. Gino is currently working on his 8th album Merchants & Mercenaries. Gino took over Upcomingdiscs Dec 1, 2008. He works out of a home theater he calls The Reel World. Favorite films: The Godfather, The Godfather Part II, The Body Snatcher (Val Lewton film with Karloff and Lugosi, not the pod people film), Unforgiven, Gladiator, The Lion King, Jaws, Son Of Frankenstein, The Good, The Bad And The Ugly, and Monsters, Inc.
NCIS: New Orleans: Season 1 I Am Dale Earnhardt