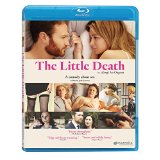 On its surface, The Little Death looks and sounds like the glossy, crowd-pleasing romantic comedies Nora Ephron (Sleepless in Seattle, You’ve Got Mail) used to make. But it becomes apparent rather quickly that no one in this funny, insightful, uneven Australian comedy is having “run-of-the-mill sex.” The movie’s jazzy, jukebox-y score also made me occasionally think of Woody Allen films, which is fitting because Everything You Always Wanted to Know About Sex* (*But Were Afraid to Ask) easily could’ve been an alternate title for The Little Death.

When I say it doesn’t take long for The Little Death to reveal its frank, bawdy nature, I mean that we’re barely two minutes into the film before Maeve (Bojana Novakovich) flusters her long-term boyfriend Paul (Josh Lawson) by revealing her rape fantasy. Maeve’s confessiob — delivered in a perfectly hesitant, hopeful tone by Novakovich — is preceded by a title card that defines “sexual masochism.” The title cards are a recurring device in the film, and they serve to reassure us that the fetishes explored in the film are real-life conditions.

We eventually meet four other couples. Dan (Damon Herriman) and Evie (Kate Mulvany) use role playing to get out of a sexual dry spell, but Dan hilariously takes his various personas way too seriously; Richard (Patrick Brammall) and Rowena (Kate Box) have fallen into a rut while trying to conceive a child until she discovers that his crying makes her feel aroused; Phil (Alan Dukes) only gets turned on by shrewish wife Maureen (Lisa McCune) when she’s asleep, perhaps because it’s the only time she’s not chewing him out; and while hard-of-hearing call center operator Monica (Erin James) and her deaf client Sam (T.J. Power) aren’t technically a couple, that’s bound to change after one eventful phone call. The stories are (loosely) tied together by Steve (Kim Gyngell), the friendly new neighbor who uses tasty treats to distract from the fact that he has to notify people he’s a convicted sex offender.

The joke with Steve is that he’s legally required to reveal his sexual dysfunction. (Even though we never find out exactly what it is.) Meanwhile, the rest of the characters largely get to lead ordinary lives with their myriad perversions safely tucked away behind closed doors. The Little Death — the title refers to a slang term for an orgasm — is also written and directed by Lawson, who largely displays a deft, perceptive touch in his feature film debut. Most importantly, the movie never feels like it is judging or looking down on its characters. (Paul may be mildly freaked out by Maeve’s rape fantasy, but he’s a foot fetishist…so who is he to call someone else a weirdo?)

The story keeps the characters almost completely separate from one another — at least until a fateful car crash forces a few of the stories to collide; and a broken gate in one storyline leads to serious repercussions in another — so the film’s quality fluctuates depending on who we’re following. In addition to Maeve and Paul — who comically goes to great lengths to fulfill the rape fantasy — I loved the lunacy of Dan and Evie’s role playing, which may or may not involve acting classes. Rowena eventually goes to extreme lengths to make Richard cry, but I appreciated the fact that the woman was the dolt in the relationship for a change. On the other hand, it’s a little harder to get behind Phil repeatedly drugging his wife so that she’ll sleep, no matter how much of a pill she is.

The biggest problem is that it feels like there’s a least one couple/storyline too many. That issue is most clearly highlighted by Monica and Sam, who don’t even appear on screen until 30 minutes into the film, well after we’ve gotten acquainted with all the other characters. After only getting that brief introduction, it’s a little jarring to find that Monica and Sam essentially star in the film’s climax, a raunchy, chaotic, three-way call to a phone sex hotline. The sequence is actually funny and lovely, even if it goes on for too long. (Not to mention that James and Power make for quite an appealing pair.) It just feels odd to leave all the other plot threads dangling to spend the movie’s final 15-20 minutes with people we barely know.

The Little Death is presented in an aspect ratio of 2.40:1. The 1080p image is arrived at with an AVC MPEG-4 codec at an average of 29 mbps, although the bitrate does vary pretty wildly. As I mentioned before, the movie has the gloss of a much starrier romantic comedy. (Which is especially impressive on a presumably much smaller budget.) Despite the unmistakably modern, digital sheen, there is fine detail to be found on close-ups (like the film’s opening shot of Paul’s mouth and Maeve’s foot). There are no instances of aliasing, banding, or other blemishes to speak of. Black levels are fine, but don’t play much of a role in this sunny presentation until the movie’s climax.

The DTS-HD Master Audio 5.1 track is, not surprisingly for a rom-com, dialogue-driven. The movie leans semi-heavily on pop hits, so songs like “Mr. Sandman” and “Beautiful Dreamer” get a nicely robust presentation. The rears are pretty quiet, except when they’re enhancing Michael Yezerski’s score. There’s also the brief echo of an orgasmic scream, which travels from the front speakers to the rears nicely.

A Little Look at the Story, Casting, and Directing — From Script to Screen: (9:59) Lawson reveals it took 6 ½ years between the time he started writing the script and the completion of the film. A pair of the film’s producers pop by to discuss the movie’s “challenging budget.”

Inside the Cast and Characters — Relationships and Sex: (11:03) Cast members offer analysis on the characters they play and their relationships in the film. Lawson reveals his goal was to examine relationships through the prism of sex.

Interview with writer/director Josh Lawson: (16:13) While the other featurettes are ok, the best of the bunch is this solo chat with the movie’s creator. Lawson reiterates the notion that he doesn’t pass judgment on any of the characters and says he never intended to star in the film. (The actor who was supposed to play Paul dropped out at the last minute.)

Despite some bumps along the way — some of them likely related to a director unwilling to trim the script he wrote — there’s more than enough to like in The Little Death.

Some of the gags and set pieces work well, but I was more impressed by the movie’s desire to humanely explore certain taboos within the context of a sex farce. (The film is more interested in the way people can be different versions of themselves in and out of the bedroom than it is in showing boobs.) These people aren’t freaks…they’re just flawed individuals who are nevertheless committed to one another.