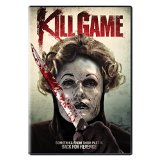 “I just have this sick feeling that something awful is going to happen.”

I pride myself on being able to keep a reasonably open mind when I pick up a new title to review. But sometimes I can’t help but judge a crappy movie book by its cover. That was actually the case with Kill Game, featuring an androgynous Michael Myers-lookalike brandishing a bloody knife on its cover. I was fully prepared to roll my eyes through this movie, which also nods to Saw, I Know What You Did Last Summer, and The Big Chill (a little). Much to my surprise, I found myself kinda-sorta getting into this twisty, nasty, low-budget slasher.

“It was high school…we all do stupid things.”

An old friend’s funeral brings together a group of former classmates. They all went to high school in the fictional town of Grace Arbor, Illinois and are members of the Class of 2010. But instead of reuniting to awkwardly dance to Motown music, this group starts to suspect the death of their friend Jimmy (Nathan Ross Murphy) wasn’t due to some beef with a random drug dealer. Since the movie opens with shots of a terrified Jimmy being tortured by a masked lunatic, we’re a bit ahead of the curve and can confirm their suspicions.

Turns out this circle of friends — douche-y cad Ryan (Pierson Fode), mean girl with body image issues Courtney (Laura Ashley Samuels), pessimistic Nathan (Joe Adler), football player-turned-deputy Blake (Tommy Beardmore), and emotional wreck Jessie (Hilary Anderson) — formed a clique of high school bullies who terrorized their classmates. Their biggest sin, however, is covering up the accidental death of a student named Brandon Booth, which also involved the guilt-ridden, heavily-medicated Beth (Sari Sanchez). Beth returns to Grace Arbor right before the arrival of Brandon’s long-lost brother Liam (Michael Galante), who is obsessed with finding answers about his death. (The movie opens with a glimpse at the night Brandon died.) Can the members of the group trust each other — and survive long enough — to figure out who is picking them off?

Writer/director Robert Mearns pretty much makes a mess of things. By that I mean, the filmmaker unnecessarily muddles what really should be a fairly straightforward slasher flick by constantly jumping back and forth in time and adding about five too many characters to the story. (Did the cynical local reporter really need to have his own storyline?) A better use of screen time involves members of the group trying to make amends for their past, childish behavior.

At one point, this movie was called Prank’d, and we get flashbacks to the clique tormenting their many victims, including paintballing the valedictorian, using porn to humiliate a gay teacher in class, throwing firecrackers at a self-pleasuring student, convincing the parents of a female classmate that she was HIV positive, and more. (Yes, more!) In other words, there is absolutely no shortage of suspects for who the killer might be (without even counting the Brandon Booth incident where someone actually died). The movie has a bit of subtle, winking fun with the group’s horribleness during a scene where Ryan and Nathan make a list of possible suspects…and practically everyone they know is on it.

The other significant bit of messiness comes from the gruesome, elaborate kills performed by the masked killer. (Who kinda looks like something Brian De Palma might have dreamed up.) Only some of the kills seem to relate to a group member’s perceived sins, but I kind of wish all of them had for the sake of consistency. The most creative, cringe-worthy ones involve an animal blood transfusion and some surgery gone horribly wrong. The final act also features a neat, ridiculous switcheroo that is more fun than the movie’s more pat ending.

Not too many of the performances stand out beyond Fode’s jerkiness as Ryan (in a good way) and some painfully flat line readings from Galante (definitely not a positive). As I mentioned before, Kill Game borrows pretty liberally from other slasher movies that featured better (ahem) execution. But sometimes it’s not the worst thing in the world to be reminded of movies you enjoyed. On top of that, this sick, silly horror flick has a merrily sadistic streak of its own.