Posted in: Disc Reviews by Jeremy Butler on January 21st, 2016 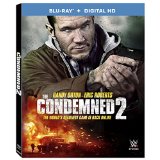 Here comes another in the long line of movies featuring a WWE superstar. Boy, I tell you, the floodgates open after The Rock (although now he goes by Dwayne Johnson) proved it was possible to move from wrestling stardom to silver screen stardom. That said, none them have really made the leap successfully since him; however, that is not from a lack of trying. This time around, Randy “The Viper” Orton looks to try his luck in the sequel to a WWE sponsored film in The Condemned 2.

After a botched operation to capture the leader of a gambling ring that ended in tragedy, bounty hunter Will Tanner (Orton) walks away from the bail enforcement life. Having his entire world rocked, Will resigns himself to a quiet life; however, just because he is done with his past doesn’t necessarily mean that his past is done with him. He suddenly finds himself fighting for his life in a deadly game brought forth by an old enemy. To make matters worse, not only is he forced to do battle, he is forced to do battle against his very own team, the same men who accompanied him for years, men who he was willing to put his life in their hands in the past. Now he must stay one step of ahead of the men who know him best, all the while trying to make his way to the man behind the curtain.

A fun thing I like to look out for when watching wrestler-featured movies is the incorporation of their finisher move. I can’t be the only one who does that, so throughout the runtime I was awaiting the RKO with anticipation. I’m not going to reveal my excitement or disappointment, so if you want to know either way, you’ll have to see the movie for yourself. Moving on, here is a movie that made me say “man, if you can’t trust your friends, who can you trust?” This was an excellent plot device that helped drive the story in my opinion, because the audience finds themselves questioning who can be trusted right along with the character. However, in our defense, I like to believe that the audience would have caught on a lot quicker than our lead character.

As far as familiar faces (aside from Orton’s) there was only one, which was Eric Roberts, who played dear old dad. Roberts does all right with his limited screen time, able to illustrate the somewhat overbearing father figure in a short period. He also manages to display empathy and caring for the son having a hard time. In regards to the other’s performance, the only one worth mention is Orton’s, as the rest of cast are mainly part of the killing crew and are one-dimensional in the capacity. Orton does a decent job of moving the story along in my opinion. Like I mentioned earlier, he’s a bit slow on the uptake, but giving the disorienting nature of the situation, I will allow him a pass. Given his background, he was suited for the rough-and-tumble nature of the action. However, there isn’t much of an emotional arc for his role in my opinion. Far be it from me to suggest adding emotion to an action flick; however, just a little time devoted to the effect of having his friends trying to kill him would have gone a long way.

The Condemned 2 is presented in the aspect ratio of 1.78:1. The 1080p image is arrived at with an AVC MPEG-4 codec at an average of 30 mbps. The video was of decent quality overall, although it was not as crisp a picture as I was initially hoping for. The resolution is never out of focus or blurred; however, the picture was simply average in my opinion, nothing to provide an immersive experience or make it jump off screen. To its credit, black levels were good during the few night sequences, providing an adequate amount of shadow. The warmer color palette worked well with the desert setting, although the brightness of blood didn’t pop as it should in my opinion.

The DTS-HD 5.1 master audio track was well suited for the film. Up front there was not much of an immersive feeling; however, the dialog was mixed well with the action sequences. Dialog remained clear and concise during the action without being overblown. Ambient noise was at a minimum during conversation; however, I was able to make out ongoing explosions during the final fight scene. Another good credit to how well balanced the audio is was that sound effects were not as exaggerated as I had anticipated; punches gunshots had more of a realistic pop, which kept the whole ordeal from becoming cartoonish.

Drones Featurette: A brief behind-the-scenes featurette that gives more insight into the unique camera angles utilized in the film. Worth a peek if the constant drone use during the movie had you asking, “Why are they using that drone?”

Fight For Your Life Featurette: Another behind-the-scenes; however, this one is more focused on the production process and the idea for the story. Intercut with interviews with the cast and crew as they explain what drew them to the film.

Now on to the part I’m sure you all want to know about: is it better than the original? It is good; however, I do not believe that it overtook the original, which I’m quite fond of. There wasn’t enough depth in this one in my opinion for it to be considered as better than the first. Again, I know emotion is a dirty word when it comes to action movies; I still maintain that a brief period of reflection on the situation could have done a great deal for the overall story.

Jeremy Butler is a film school graduate of the International Academy of Design and Technology. He is been writing for Upcomingdiscs since 2012; however, movies have played a big part of his life for much longer. Favorite genres include horror, science fiction/fantasy, and comedy. Favorite movies are V for Vendetta, Boondocks Saints, Kiss Kiss Bang Bang, and The Godfather.
Nomads (Blu-ray) The Diary of a Teenage Girl (Blu-ray)