Posted in: Disc Reviews by Gino Sassani on January 21st, 2016 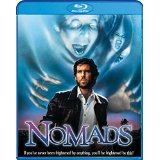 “Did you ever have a dream but didn’t know where it started?”

Some dreams did indeed start with the box office flop Nomads. It was the first starring role in a feature film for future James Bond Pierce Brosnan. It was also the first film directed by John McTiernan and his only screenwriting credit to date. Both would go on to have quite flourishing careers, and I suspect neither spends much time looking back at Nomads, and with good enough reason. And those careers did not take long. For McTiernan his next three films would be, in order: Predator, Die Hard, and The Hunt For Red October. The film also sports a score by legendary Bill Conti, the man who started his feature film career with Rocky and ended up with a Best Music Oscar for The Right Stuff. Conti teamed up with Ted Nugent, and they improvised most of the Nomads score with Nugent making coffee runs packing his trademark extra protection. With a dream team like this you might expect Nomads to be a pretty solid film. You’d be wrong.

Dr. Flax (Down) is working the emergency room when a frantic patient is brought in. He’s screaming in French and fighting the staff who are trying to calm him down. He jumps at Flax and bites her ear while whispering something to her. Before too long she begins to have flashes of the man’s life. The man was Jean Charles Pommier (Brosnan), and he was an anthropologist. Through Flax’s visions we see the last weeks of his life. He is being followed by a tribe of demons he called Nomads. They take various forms and have taken the form of a street gang. He’s strangely drawn to them, as is Flax inevitably. She works her way to Pommier’s wife (Monticelli). The two of them are terrorized by the gang and attempt to escape their situation.

Nomads begins with an absolutely brilliant idea. A man transferring his memories to his doctor before he dies is a pretty solid way to start a thriller. Unfortunately, it all gets rather lost very quickly. Brosnan does a very good job with his performance as he is both terrified and mesmerized by these people. His French accent is another thing entirely. He manages to slip in and out of something that’s pretty bad even at its best. I don’t see how his nationality was at all essential to the story. McTiernan should have dropped it as soon as he realized how badly Brosnan was going to mess it up. At that point the compelling nature of his actual performance would not have suffered such unnecessary distraction. Since McTiernan was the script’s co-writer, it’s not like he didn’t have control over the story in order to make such a vital change.

It’s the story where the rest of the film falls apart. The visions don’t always make a ton of sense and go on for entirely too long at times. The pacing is so uneven that you can’t ever get much of a beat on what is happening. Once we meet the street gang made up of such acting powerhouses as Adam Ant, I think whatever thread that was holding the film together is finally irreparably severed.

The film tanked at the box office, and it’s easy to see why. The real question is how so much talent managed to create such a bad film. Fortunately, McTiernan turned his energies completely to directing and never wrote another script, at least not one that has been filmed. It’s a matter of doing what you do do well. That kind of focus took him from worst to first with Die Hard just a short time later. The only value in the film is to witness the early work of director and actor. For Bill Conti this is also one of his most uninspired scores. To hear him talk about it all being improvised at the recording session is no surprise. We all know for certain he’s capable of much better than this. It’s a forgettable film released strictly for whatever cult following it may have.

Nomads is presented in its original aspect ratio of 1.85:1. The 1080p image is arrived at with an AVC MPEG-4 codec at a solid 36 mbps. The high-definition image presentation is often extremely soft. There’s little detail or sharpness to set this apart from any previous release there might have been. Black levels are average at best. Colors are a bit faded and missing any real pop.

The DTS-HD Master Audio 2.0 is all about the dialog. It’s not even a great job with this simple task. I had to turn things up and backtrack a few times to hear something that was said. Conti’s synth and guitar score dominates, perhaps too much. There’s almost a cyberpunk feel to the audio presentation, and I don’t mean that in a good way.

The film was made on a small budget, so it’s easy to forgive the production values. But I get a feeling that the music wasn’t the only thing that was being improvised as it was being recorded. There appears to be a complete lack of direction, an almost unfinished quality to the movie. I don’t see it as a film you’ll want to devote minutes of your life to see more than once, if that. Instead I’d rather look at these folks’ other films. “There’ll be time enough for that.”

Gino Sassani is a member of the Southeastern Film Critic's Association (SEFCA). He is a film and television critic based in Tampa, Florida. He's also the Senior Editor here at Upcomingdiscs. Gino started reviewing films in the early 1990's as a segment of his local television show Focus. He's an award-winning recording artist for Omega Records. Gino is currently working on his 8th album Merchants & Mercenaries. Gino took over Upcomingdiscs Dec 1, 2008. He works out of a home theater he calls The Reel World. Favorite films: The Godfather, The Godfather Part II, The Body Snatcher (Val Lewton film with Karloff and Lugosi, not the pod people film), Unforgiven, Gladiator, The Lion King, Jaws, Son Of Frankenstein, The Good, The Bad And The Ugly, and Monsters, Inc.
Stonewall The Condemned 2 (Blu-ray)