The Diary of a Teenage Girl (Blu-ray)

Posted in: Disc Reviews by Brent Lorentson on January 21st, 2016 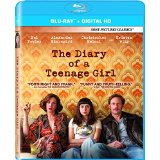 Have you ever stumbled across someone’s diary?  At first glance it may look innocent enough, but for the person with dreams, fears and confessions, it is that friend and confidant that will listen to its author as they bare their soul and not be faced with judgement. In The Diary of a Teenage Girl, not only do we get a peek into the secret life of Minnie Goetze (Bel Powley), but we are taken on a journey of experiencing first love and sex through the eyes of a 15 year-old girl.  It’s sweet, it’s tragic, but where this film’s strength comes at its audience the strongest is with its honesty, which for some may be a bit too sobering of a reminder of what life is like as a teenager.

Those are the words just about every parent of a teenager would cringe to hear their child say, then to go on and discover it was with an adult well into their 30’s, well, most parents would be reaching for their guns or baseball bats, even though the film takes place during the sexual-freedom years of the 70’s.  Where Minnie’s love affair becomes all the more scandalous is that it is with her mom’s boyfriend Monroe (Alexander Skarsgard).  Sure, Monroe embodies the sex appeal to make most women swoon, but it’s hard to ignore the fact that he is still a predator despite Minnie’s feelings.

Charlotte (Kristen Wiig) takes on the role of Minnie’s mom, and it’s not hard to pick up on the fact that Charlotte fits in better as her daughter’s friend rather than her parent.  Surrounded by drug-fueled parties, it’s no wonder Minnie is the confused teenager she is as she confesses her affairs and her fears and her love into a cassette player.

Bel Powley puts in a performance that is oftentimes sweet but at other times simply heartbreaking.  It’s a role that seems to be filled with some much vulnerability, not just because there are numerous scenes of intercourse, but confessions that that seems to come from the character’s soul that Powley manages to project at times without saying a word.

As the film goes on and Minnie discovers her inner artist, animation manages to intertwine in the form of other characters and in other instances melding into the characters themselves. There is a fun little hallucination sequence with Minnie as she experiments with acid that stands out fondly.

The film juggles the emotions of love, lust, and heartbreak; it is a blunt trip through the life of a teenager struggling to understand her sexuality and herself.  Basically for fathers out there, this is a horror film that has the kind of honesty that has the same bite as 2003’s Thirteen.   Minnie’s exploration of pleasure through sex and drugs is something we don’t see put on display so bluntly. Adults may understand the mistakes she may be facing, but director Marielle Heller is careful to never judge.

More films need to be made with this kind of bravery; it’s bold and far from safe, but that’s the life of a teenager at times.  The Diary of a Teenage Girl is a look into the heart of a fragile and confused teen simply looking to be loved and accepted, something so many teens are encountering day after day.  Here is a film that speaks to its teenage audience and embraces them while showing that they are not alone with these feelings, and hopefully this will find an audience and help others find acceptance within themselves.

The Diary of a Teenage Girl is presented in an aspect ratio of 2.40:1. The 1080p image is arrived at with an AVC MPEG-4 codec at an average of 26 mbps.  The film is shot with a warmth and vibrancy that helps capture the time of 1976 San Francisco.  There is definitely a yellow/green filter being used as well as some colors being washed out, but this is an artistic choice and helps gives it a vintage-film look.  When the animation comes in it also has a very dated look but still works for the style of the film.  There are no compression issues.

The DTS-HD Master Audio 5.1 track is heavily dialog-driven, which comes as little surprise.  The dialog is clear throughout the film, and in moments the use of 70’s rock makes its way into the soundtrack but doesn’t do all that much to improve the experience, since this is more or less a narrative journey spoken to us at times through voiceover.

Commentary w/ Cast and Director: A fairly standard track that covers everything from the director and her appreciation of the original novel to the process of getting the film made.  While it does have plenty of extra tidbits on the production, I’d save listening to this for the hardcore fans.

LA Film Festival Q&A: (25:19) Here we get a Q&A that follows a screening of the film with actors Bel Powley & Alexander Skarsgard and writer/director Marielle Heller.  There’s nothing here that we haven’t already heard in the commentary or the behind-the-scenes feature.  We get to know how the actors got attached to the film as well as what inspired the director to take on this project.

Marielle’s Journey: Bringing The Diary To Life: (23:07) A behind-the-scenes feature from the director’s perspective about what inspired her about the novel and what motivated her with her casting choices.  We get some shots of them working on the film, but mostly this is filled with interviews with the cast and crew discussing what brought them to the project.

Deleted Scenes:  We only get three deleted scenes, but it’s the first, a short film that Minnie makes, that is the most interesting as we see her film shot from an 8mm perspective.

Dads, unless you want more reason to fret at night about what your little girls may be up to, this one is not for you.  This is the kind of film I can see a lot of mothers and daughters bonding over and in time developing a solid cult following.  It’s very well done film, but certainly not for everyone.  This is not Diary of a Wimpy Kid for girls; this is something much more mature, but I consider this a film worth checking out.

Brent Lorentson is a horror writer and film critic based out of Tampa, Florida. With a BA in Digital Film, he co-wrote and co-directed Scavenger Hunt. His short stories have appeared in various horror anthologies. In 2019 his short script Fertile Blood will be a part of the anthology horror film Slumber Party. He is currently working on his first novel A Dark and Secret Place set to be released in late 2019. Favorite Films: Taxi Driver, Fight Club, I Saw the Devil, The Wild Bunch, Dawn of the Dead, A Clockwork Orange, Pulp Fiction, Heathers, The Monster Squad, and High Fidelity.
The Condemned 2 (Blu-ray) Knock Knock (Blu-ray)