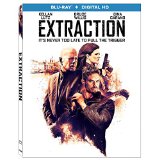 “Don’t ever threaten my family again.”

In Extraction, a government analyst embarks on an unsanctioned rescue mission after his father — an over-the-hill CIA field operative — is kidnapped by a shadowy group of bad guys. In a related story, I think I got my dad a CD for Father’s Day last year. But while the hero of Extraction might edge me out in the Son of the Year race, the rest of this crummy actioner is basically a harmless debacle.

The movie opens with hard-nosed CIA operative Leonard Turner (Bruce Willis) being held captive half a world away from home. His cover has been blown, and he learns his family is in danger. After Leonard escapes using some Bruce Willis-style badassery involving a pen, he phones his colleague Ken (D.B. Sweeney) and urges him check in on his family. Unfortunately, Ken doesn’t arrive in time to save Leonard’s wife, who is shot dead.  Leonard’s son Harry had a chance to stop the killing, but ultimately couldn’t pull the trigger.

The action then jumps ahead 10 years, and a guilt-ridden Harry (Kellan Lutz) is obsessed with proving he has what it takes to be a field operative like his dad. Leonard’s own career is on its last legs when he is kidnapped during a mission involving “the condor”, a cut-rate MacGuffin that can supposedly bring any government to its knees. Despite several failed attempts at becoming field operative, Harry wants in on the mission to rescue is dad. Unbeknownst to him, the CIA instead assigns Agent Victoria Fair (Gina Carano), who also happens to have a past relationship with Harry. This wouldn’t be much of an action movie if Harry simply accepted his role on the sidelines, so he fights his way out of CIA custody and travels from Prague to New Jersey — it really should be the other way around, no? — to rescue his estranged father.

“How the hell does a pencil-pushing desk jockey take out four highly-trained agents?!”

It’s a pretty good question, and it’s one the movie actually addresses. Given the dopey plot I just outlined in the previous two paragraphs, I wouldn’t have been totally shocked if the movie ignored the fact that the ripped Lutz — who’s played Hercules, for crying out loud! — isn’t very convincing as a “desk jockey.” Unfortunately, this movie isn’t totally sure what it wants to be.

Extraction has the bones of a perfectly generic and disposable action flick. But director Steven C. Miller, working from a script by Max Adams and Umair Aleem, seems intent on injecting humor and lighthearted beats that don’t really belong in this story. For example, it feels off whenever Harry — who is supposed to be single-mindedly going off the reservation to rescue his dad — pauses to flirt and trade banter with Victoria. The movie’s grim tone also makes a fairly farcical car chase that inexplicably puts a drunk driver at the wheel of the vehicle Harry is riding in seem even more ludicrous.

The action sequences are generally choppy to the point of incoherence. The biggest offender is the movie’s muddled climax; after it looks like one wounded character is going to be ok, that same person is dead a few minutes later. The exception is a hard-hitting, mano-a-mano fight inside a men’s room, but even that’s a poor man’s variation of something the Bourne movies have already done.

Lutz makes for a totally credible action hero, but he plays Harry as more of a wiseacre than he probably should be. It doesn’t help that he and Carano have zippo chemistry. The former MMA star has been acting for a relatively short amount of time, so she still struggles through some painfully flat line readings. (Deadpool was smart to keep her as more of a strong, silent type.) She’s actually a little better when Victoria has to pretend to be a drunk nitwit, which makes me think Carano might be more effective when she has something broad to play.

That being said, the biggest letdown is Willis. He’s not in the movie much, and the filmmakers are definitely relying on the legendary star’s presence to fill in the gaps whenever he’s not on screen. But this is the latest in a string of stiff, charmless performances from an actor whose personality and regular-guy appeal were once his greatest assets. Simply put, he looks bored these days…almost as bored as you will be watching him in this film.

Extraction is presented in an aspect ratio of 1.85:1. The 1080p image is arrived at with an AVC MPEG-4 codec at an average of 20 mbps. In case you didn’t know this was a low-budget endeavor, there are several brief (and unnecessary) CGI shots of a satellite orbiting the planet that are embarrassingly bad. Black levels fall a little flat and, between the movie’s Prague and New Jersey settings, the desaturated palette doesn’t leave much room for colors to pop. (The exception is the movie’s surprisingly lively red, white and blue-themed opening title sequence.) The digitally-shot Extraction ramps up the artificial noise for the movie’s flashback prologue and maintains an appropriate level of grit throughout. Fine detail is impressive, starting with the movie’s opening shot: a close-up of Willis’s weathered face. In the end, this is a slick presentation from Lionsgate that occasionally (and inadvertently) shines a spotlight on this production’s limited resources.

The DTS-HD Master Audio 5.1 track lends the action some much-needed punch. And I do mean “punch”, since the bulk of the combat here is hand-to-hand. (Or billiard ball-to-face, in at least once instance.) The bits of gunfire offer some additional pop, and a few scenes set in the streets of New Jersey offer minor immersion. (Extraction was actually filmed in Alabama.) The surround sound field also comes fully alive during a sensory overload moment for young Harry early on, and when Harry and Victoria do some recon work in a nightclub. (Welcome to the party, subwoofer.) If anything, the track is a little too aggressive; there were a couple times I had to scramble to turn the volume down during action-packed moments that immediately followed dialogue-driven scenes. Overall, this is an effectively potent track that helps enliven the clichéd proceedings.

Commentary with director Steven C. Miller and actor Kellan Lutz: The most mind-blowing tidbit I gleaned from this track is that Willis was only available for a grand total of one day. I understand he’s not exactly asked to carry the film, but it still gave me a greater appreciation for the amount and variety of material they were able to get with him. (Although that limitation helps explain the choppy, disjointed climax.) Miller and Lutz go a little overboard fawning over Willis’ performance, but we also get some good info here about the challenges of the compact, 17-day shoot.

Deleted/Extended Scenes: (4:42) For some reason, three out of the four scenes revolve around a relatively inconsequential sequence involving a scumbag mechanic Harry and Victoria encounter on their mission. In other words, feel free to skip this entire bunch.

The Making of Extraction: (12:57) A pretty standard “Making of”, with the actors discussing their characters and the plot. (*Do not* watch this until after you’ve seen the film, since it delves into spoiler-y plot points.) Miller talks about his desire to emphasize hand-to-hand combat over gunplay.

The best thing about Extraction — other than some fleeting moments of solid hand-to-hand action — is that it’s only 83 minutes long. The plot is nonsensical and the execution is lacking…but at least the movie doesn’t take up too much of your time.