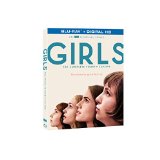 “Taking the next step in a series of random steps.”

Those words are part of a toast near the start of this season, as chronically neurotic and self-absorbed writer Hannah Horvath prepares to embark on a mini-adventure that will temporarily take her away from her natural habitat of New York City. They also double as a tidy summary of the entertaining (and appropriately messy) fourth season of HBO’s Girls, while simultaneously capturing what it’s like to progress through your 20’s.

At the end of season 3, Hannah (star/creator Lena Dunham) was accepted into the prestigious Iowa Writers’ Workshop creative writing program. It was a bittersweet achievement since it would take her away from boyfriend Adam (Adam Driver), whose own acting career had started to take off, but it ultimately boosted Hannah’s confidence. The first episode/“Iowa” finds Hannah bidding a temporary farewell to her circle of friends.

Marnie (Allison Williams) has formed a musical and (as we see during her, ahem, revealing introduction in the premiere) sexual partnership with Desi (Ebon Moss-Bachrach), who might actually surpass Marnie in terms of hurtful cluelessness. Jessa (Jemima Kirke) is embracing her knack for caretaking in a variety of ways, including one that proves useful during the season finale. And Shoshanna (Zosia Mamet) finally graduates from college, but her ensuing job hunt isn’t quite as glamorous or satisfying as she imagined, which puts her on a similar boat to the one Hannah was on when we met her way back in the series premiere.

Speaking of that first-ever episode of Girls, the season 4 premiere kicks off with a satisfying callback to the series’ opening scene, which featured Hannah’s parents taking her out to dinner and telling her that they were cutting her off financially. This time around, a more mature successful version of Hannah is flanked by a supportive partner (Adam) and the dinner is celebratory in nature. That’s just one of several examples of the pleasing familiarity fans of the show have built with these characters, even when they get on our last nerve in disarmingly recognizable ways. Season 4 features return appearances from a host of recurring characters, including Andrew Rannells’ life-of-the-party presence as Hannah’s gay friend/ex-boyfriend Elijah and a meaty-late season storyline for Hannah’s parents (played by Peter Scolari and Becky Ann Baker) that was sneakily incepted into our brains during the first season.

It’s no major spoiler to reveal that things aren’t exactly rosy for Hannah during her three-episode stint in Iowa, or after her return to NYC. The series continues to mix in themes that appear to be pretty personal to Dunham — Hannah’s graphic, intensely personal creative writing earns her an unflattering label during the Writers’ Workshop — along with the general malaise of putting off “adulthood” for as long as possible. (Jessa seems allergic to regular employment, while Shosh seemingly pursues some Sex and the City lifestyle that doesn’t exist.)

I should also mention that a lot of this stuff manages to be pretty damn funny, whether the show is playing Marnie and Desi’s tragicomic musical pursuits with a straight face or parodying a specific type of New Yorker. Gillian Jacobs guests as infuriatingly serene and self-assured artist Mimi-Rose, while Zachary Quinto is a riot as her insufferable, irresistible ex, Ace. Meanwhile, Jake Lacy also guest stars as Fran, an uncool nice guy teacher who manages to get Hannah’s attention. (Lacy and Jacobs basically play the temperamental opposites of Adam and Hannah.) Comedian Marc Maron pops up as a powerless political foil for Ray (Alex Karpovsky), who is driven so mad by the installation of a traffic light near his apartment that he decides to run for (minor) office.

Despite Hannah’s multi-episode trip to Iowa, this is one of the more cohesive seasons of Girls. (There’s certainly no “One Man’s Trash”-style departure.) The highlights are Ep. 5/“Sit-In”, in which Hannah receives a shock upon returning home and locks herself in her bedroom. (In case you forgot that she’s basically a 10-year-old.) Ep. 10/“Home Birth” combines your typical season finale-y stuff (a baby arrives! A cliffhanger involving Shosh accepting a job in Japan!) with quieter moments that resonate with long-time fans of the show, including Hannah saying an uncertain farewell to Adam. To be clear, Driver doesn’t appear to be going anywhere, despite his side trip to a galaxy far, far away. The show has smartly established a credible bond between Adam and Jessa as a way of keeping the invaluable actor around.

In the end, this season of Girls moved the show forward by creating conflict for all the characters — not just the titular female ones — even as they appeared to make successful, healthy choices.

Girls: The Complete Fourth Season is presented in an aspect ratio of 1.78:1. The 1080p image is arrived at with an AVC MPEG-4 codec at an average of 22 mbps. The show continues to be one of HBO’s most surprisingly versatile visual experiences, despite not relying on the technical wizardry of Game of Thrones or the moodiness and flair of True Detective. Except for the final scene of the season (which brings wintry whites to the show for the first time), Girls takes place entirely during the summer. As a result, the typically grayish palette you might expect from an urban, NYC-set story is often broken up by pleasing bursts of sunshine and vibrant colors. The show’s trip to “Iowa” briefly introduces some panoramic views and additional warm tones. Once again, this is close to as good as it gets in terms of a contemporary, straightforward presentation.

The DTS-HD Master Audio 5.1 track continues to be wholly immersive without ever distracting from the main action. So there is a very clean and defined separation, with the dialogue sticking to the front and the myriad city noises dynamically taking up space in the rears. Fidelity is completely spot-on, and Marnie and Desi’s musical performances are granted a breadth and clarity that the doltish duo probably doesn’t deserve. Of course, dialogue continues to be key here, and it comes through cleanly at all times.

(Features available on Discs 1 and 2.)

Deleted and Extended Scenes: (26:34) Some pretty strong material, highlighted by more of Anthony Edwards and Ana Gasteyer as Shosh’s parents, bonus Rannells (always a good thing), and additional screen time for Shosh herself in the latter half of the season.

Inside the Episodes: (33:34) HBO offers these weekly, behind-the-scenes featurettes for some of its shows, and these feature Dunham dishing on each episode. In addition to highlighting the season’s themes, Dunham points out some neat little Easter eggs and callbacks. (Like Hannah’s dad’s sexuality being called into question way back in season 1.)

Audio Commentaries: There are seven tracks — for Eps. 1, 2, 3, 5, 6, 8, 9 — and they feature cast (Dunham, Williams, Kirke, Mamet, and more) and crew (writer/producer Jenni Konner, director Richard Shepard, writer Sarah Heyward, and more). During the commentary for the season premiere, the four main Girls give co-star Driver grief for never watching the show, and they bemoan the fact that you won’t be hearing him on any of these tracks. (He’ll never do a commentary because it means he’d have to watch the show.) That first track sets the chummy tone for the rest of them, which mix in fun anecdotes with helpful production insights. (In case you were wondering, they didn’t really film in Iowa.)

The Making of Girls: (20:15) This featurette combines footage from table reads, on-location shooting, and cast/crew interviews to form a pretty effective production diary of season 4.

Gag Reel: (12:38) Once again, the season’s gag reel is presented in two parts, with Part 1 (6:12) highlighting flubs from the main cast while Part 2 (6:26) proves some of the season’s guest stars (Jacobs, Lacy, Maron, and others) aren’t immune to making mistakes either.

Marnie Michaels, “Riverside” (1:59) Marnie tackles this tune solo in the finale, which makes it an interesting bookend to “Breathless” from the season premiere.

Girls: The Complete Fourth Season features all 10 episodes on two discs. Season 5 got underway this past Sunday, but I’d still recommend revisiting this batch of of episodes, especially since HBO has once again offered them with a terrific A/V presentation and plenty of quality bonus material. Now excuse me while I go fire up the season 5 premiere on my DVR.