Posted in: Disc Reviews by Gino Sassani on March 2nd, 2016 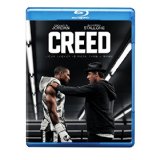 The last time we checked in on Rocky Balboa was 2006. It was a bittersweet coda to a franchise that provided 30 years and six films of the life and times of Rocky Balboa. Some were truly great films. I’d count the first and last as in that category. Some were near misses like the third and fourth films, while the fifth was pretty much a total disaster. In those years and films we watched Rocky go from a hungry Philadelphia wannabe boxer to the champion several times over. Like the franchise, the character had his own highs and lows. There’s no question that the Rocky franchise has gone the distance. And while it might have been a split decision, the Rocky films still stand as the champion of the film genre. It’s no surprise that Hollywood would want to pump a little more cash out of this reliable franchise. With Sylvester Stallone not exactly in his peak shape, we enter the often disastrous territory of the reboot/reimagine/remake. Just like an athlete who doesn’t know when it’s time to hang it up, Hollywood is known for propping up a franchise long after its staying power has faded. In both cases somebody is going to get hurt. But don’t call Rocky down for the count just yet. Writer/director Ryan Coogler just might have found a way to breathe new life into the old franchise. Rocky just might have been saved by the bell with the arrival of Creed. All of a sudden it’s a whole new fight game.

Adonis Johnson (Jordan) has grown up a troubled youth. His mother is dead, and he doesn’t even know who his father is. He ends up in and out of juvenile detention centers until he’s rescued by a woman with a story of her own. Her name is Mary Anne Creed (Rashad), and she was married to the late fighter Apollo Creed. The fighter had an affair years ago with Adonis’s mother, and now Mary wants to take the boy in and raise him as her own. Adonis finds himself with a new identity that explains a lot about why he is the way he is. It also explains why he’ll eventually give up a high-paying career to fight. Up to now he’s been completely self-taught and ripping up the Mexican underground fight circuits. Now he wants to go legit and understands that requires the training he never had. There’s only one man who can give him that. He makes the exodus from L.A. to Philadelphia, where he approaches his father’s best friend and fiercest rival … Rocky Balboa (Stallone).

Of course, Rocky is reluctant to train anyone. You know he’s going to relent, mostly out of his feelings for Apollo Creed and the debt and guilt he feels. There’s the typical training middle of the film that leads to Adonis being challenged to fight the champ Ricky “Pretty” Conlin. Conlin is looking for an easy payday, and he’s quite the arrogant Irish lad, played aggressively by Tony Belew. The result is a powerhouse match that takes us once again inside the ring with Rocky now the corner man.

Michael B. Jordan does a pretty good job as the son of Apollo Creed. The wise choice here was not to try to make him a clone of either Apollo or Rocky. He has his own style and his own way of doing things, and it keeps the character far more interesting than just a kid trying to follow in his father’s footsteps. In fact, he’s trying to do what his champion father could not. He wants to excel and survive in the ring. His ambition gets the best of him at times, but this is a hungry kid, much as Rocky once was. But he’s his own man, and the temptation to try to merely re-shoot Rocky is avoided.

The legend of Apollo Creed is played so well I overheard a lot of people talking about Carl Weathers being dead. He’s not, of course, but the film has apparently convinced a lot of folks he was. You can thank the resistance to call on Weathers for some kind of flashback. It’s better that Adonis never met his father. For me the same was true of Burt Young, who played Paulie for many years. I had to check to see if he was still kicking. He is, in case you were asking the same question. He’s got at least four films coming out in the next year or so. I have to say I missed him more than anyone.

While the film isn’t really about Rocky Balboa, Stallone can’t help stealing every scene. I don’t mean in a ham-it-up way. This may be the best emotional performance I’ve ever seen from Sly. It’s not just Rocky who has matured, but Stallone himself. Rocky’s presence comes through in subtle ways I would not have predicted in 1976 that actor or character were ever capable of delivering. I love the way the film plays out this bond. It’s very much a father-and-son kind of thing. It’s great the way these two characters are moving in opposite directions yet are somewhat envious of each other. That’s never played out directly, but in the small expressions and nuances. Adonis envies Rocky’s career and relationship with a father he never met. Rocky is looking at a kid just at the beginning of the journey. They find a closeness here that doesn’t ever have to be expressed in any overt way. I can well imagine Adonis one day sitting at Rocky’s grave telling him about his day as Rocky does at the graves of Adrian and Paulie.

This is a different film, but director Coogler is smart enough to place those emotional beats from the Rocky franchise in just the right places. They’re like breadcrumbs dropped so that we can find our way back to 1976 without losing where we are. There’s the famous statue that I’ve visited many times when I lived near Philly. The steps of the Museum of Art play a part here, and once in a while the original score gives way to the Bill Conti Oscar-nominated anthems. The turtles are still there, and Rocky’s graveside chats with Adrian and Paulie will almost bring a tear to your eye. The film is called Creed, and for good reason, but we’re never allowed to forget how we got here.

The film paints a very good picture of how both filmmaking and the boxing world have changed from 1976 to 2015. In those days boxing was more about finesse and strategy. You saw it from the close quarters inside the ring in Rocky. We’re back again, but this time it’s about power and the strength of a single punch. It’s no mystery that the fight numbers have been hampered by short fights with decisive knockouts. I grew up in the Ali/Frasier days, and you got a few rounds out of your pay-per-view dollar then. Here the camera focuses on that power. There is less footage of boxers dancing around looking for an opening. Now it’s the machine-gun rat-a-tat-tat of punishing blows. I’m very interested in watching these two films back to back to fully appreciate these changes.

There are flaws and missteps. Adonis is dating a musician with fading hearing. Bianca is played by Tessa Thompson, and it ends up being developed and pretty much used as a throw-away part. Thompson is fine, but poorly written. There’s no chemistry between them, and the thread is allowed to drop and reappear with little logic throughout the film. It’s an all-too-obvious reach for that Adrian character, but she’s never developed, and the film never truly commits to the relationship. Instead of being the inspiration Adrian was, Bianca is more of a distraction. There’s an emotional setup that goes nowhere in the end.

Creed is presented in its original aspect ratio of 2.40:1. The 1080p image is arrived at with an AVC MPEG-4 codec at an average 35 mbps. There is a nice element of contrast in this high-definition image presentation. You have the warm colors of the California prologue suddenly turned into the cold dreary colors of winter in Philadelphia. The Philly stuff is very much consistent with the earlier films. Then we have the finale fight where colors are vivid and bright. Here the sharpness pulls you right into the ring. Today we’re used to our high-definition sports, and that’s what gets delivered here. It’s absolutely where the film establishes its own look apart from the franchise. Here’s what decades of filmmaking technology makes its own statement. Black levels here are inky and reveral wonderful shadow definition.

The DTS-HD Master Audio 7.1 is likely more than necessary, but the mix works. Most of the surrounds are dedicated to the urban tunes and the fights themselves. Otherwise this is a close and intimate film that delivers strong dialog moments. It’s in the ring where the subs come alive. The punches pack some power that you can feel coming from the speakers.

Know The Past, Own The Future: (14:49) This behind-the-scenes feature does a nice job of connecting the film with the Rocky franchise. Plenty of clips from all of the films. Athletes talk about the inspiration and impact the show had on their own lives and careers.

Becoming Adonis: (5:42)  This one focuses on the training that Michael B. Jordan went through to prepare for the part.

The film also suffers from a middle act that falls back too heavily on a couple of beats. Yes, it’s amusing to watch Rocky’s training style or his reading the paper while Adonis works out. But it ages faster than Rocky has himself. I got the feeling that the film got stuck in that Philly snow, and I know that feeling well. Fortunately, the film breaks loose and ends up delivering some punches that land. It’s one of the better reboots I’ve seen in many years. I’m actually interested enough here to find out where it goes from here. Talk of the sequel was already underway before I attended a press screening of the film. I thought it was a bit premature. Now? “Show me something.“

Gino Sassani is a member of the Southeastern Film Critic's Association (SEFCA). He is a film and television critic based in Tampa, Florida. He's also the Senior Editor here at Upcomingdiscs. Gino started reviewing films in the early 1990's as a segment of his local television show Focus. He's an award-winning recording artist for Omega Records. Gino is currently working on his 8th album Merchants & Mercenaries. Gino took over Upcomingdiscs Dec 1, 2008. He works out of a home theater he calls The Reel World. Favorite films: The Godfather, The Godfather Part II, The Body Snatcher (Val Lewton film with Karloff and Lugosi, not the pod people film), Unforgiven, Gladiator, The Lion King, Jaws, Son Of Frankenstein, The Good, The Bad And The Ugly, and Monsters, Inc.
Frankenstein – The Mini-Series (Blu-ray) Exclusive Interview With Justin Meeks and Duane Graves From Kill Or Be Killed