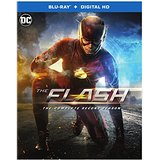 “My name is Barry Allen, and I am the fastest man alive. When I was a child, I saw my mother killed by something impossible. My father went to prison for her murder. Then an accident made me the impossible, and I became the Flash. I used my powers to find the man responsible for my mother’s death. I thought I would finally get justice for my family, but I failed. It’s been six months since the Singularity. I’m on my own now. Decided it’s better that way. Keeps the people I care about safe. There’s only one thing I can do now. I run…”

The Flash is CSI with a twist. Barry Allen (Gustin) is a police scientist working in the CSI lab of Central City. In fact, he appears to be the only staff of that unit, having pretty much the run of the lab. When he was 11 he witnessed his mother’s murder amid red and yellow streaks of lightning. Within the streaks he saw a man dressed in yellow. No one believed what he saw, and his father (Shipp) has been doing time for the murder he did not commit. Young Barry was taken in by their family friend Detective Joe West, played by Law & Order’s Jesse L. Martin, and daughter Iris West (Patton). When a particle accelerator at Starr Labs explodes, the dark matter wave that spreads across Central City combines with a lab accident, and Barry is bestowed with incredible speed. Unfortunately, he was not the only one affected. Other people received various other powers and are referred to here as Meta Humans.

There are the expected differences between the show and the comics lore. There wasn’t really a “Team Flash” in the comics. Sure, he would team up with other heroes from time to time, and he was a member of the Justice League. But a solo hero makes for less engaging television week in and week out. So while it’s a dramatic shift from the source material, it’s essential that Barry have interactions during his heroics. There is also a lot of nice chemistry to be found in the trio of Barry, Caitlin, and Cisco. I love them as a team. Each has just the right mix of what the others might lack to make this one of television’s better working relationships. That’s another crucial element. It’s actually a page out of the Marvel playbook. If you read Spider-Man or Fantastic Four or any of those early titles, it was the supporting characters that made the book appear real. Their stories were just as important as the heroics. That’s exactly what this team does for the show. Without it, there is no considerable future for the show. With it, this thing can go a decade or more.

I’m also pleased to report that Thomas Cavanaugh is back as Dr. Wells. This is where the perfect storm happens. The season brings back one of the most dynamic characters by introducing us also to one of the comic version’s biggest elements using one to create the other. This season brings us the discovery of Earth-2. That’s where we get a new version of Wells. Cavanaugh gets a lot of meat to play this season. As hard as it might appear, he’s even better. This season he’s at times a villain and at times a good guy. There are shades of the mentor the Earth-1 Wells was to Barry. But the actor gets to play so many sides of the personality that it keeps us guessing his allegiances until the very end. It’s all part of the nuances of an exceptional performance.

A not-so-exceptional performance is still found in Iris West, the most changed character and the weakest link on the series. I’m sure that Candice Patton is a fine enough actress, but this is a terrible part. The character is one-dimensional and spends more time whining than contributing anything to the story. She’s in on Barry’s secret now and a part of “Team Flash”, but I just can’t get into the character at all. Meanwhile, her father is played by Jesse L. Martin, one of the best television has to offer. He brings the authority from Law & Order and mixes in the kinds of things necessary for a hero show. His very presence on the show lends a great deal of gravitas to the whole thing. He is the anchor to reality that allows us to take the leaps of faith we need to to accept the extraordinary aspects of the show. Each time the show appears to be “out there”, Jesse Martin brings it all into sharp focus. I’m not sure any of this works without him. He provides the emotional heart of the series.

Earth-2 also provides us with Jay Garrick, played by Teddy Sears. The character was the original Flash dating back to the World War II era comics of the 1940’s. He was teased at the end of last year when his familiar helmet came through Barry’s portal in the accelerator. I’m going to ask fans of the character to be a little patient this season with Jay Garrick. Without giving away the goods, there are going to be moments when you’ll feel that the show is being more than a little sacrilegious with the character. Hang tough, and you’ll be rewarded in more ways than one.

Zoom is the big bad this season. There were several incarnations of the character from the comics. Some versions have him being the same character as Reverse Flash. This is a more modern comic version of Zoom, and it’s the Earth-2 version. Zoom is voiced by Tony Todd, and combined with a pretty wicked appearance, he’s a rather sinister character indeed. He’s both a direct threat and also throws meta-humans from Earth 2 in Barry’s path. That means Panabaker gets to go full-on Killer Frost, and Valdes gets to enter Vibe and Reverb territory. Both are a treat. And seriously, what is a superhero series without its villains? Sometimes that’s why we tune in in the first place. The Flash’s rogues gallery is well represented this season. Dr. Dark is combined with Wally West’s future wife Linda Park, and is played by Malese Jow. Of course, this is the Earth-2 version. There’s a killer Christmas episode that brings us the return of Mark Hamill as Trickster, Liam McIntyre as Weather Wizard, and an additional season appearance by Wentworth Miller as Captain Cold. Talk about your Bad Santa. Best Christmas episode ever. “Deck the halls with body parts of a girl named Holly…”  Then there’s the “family” episode which features Captain Cold and Sis Lisa Snart (List), but the big pay-off here is Michael Ironside as Daddy Snart.

Comic fans will also appreciate the introduction of Patty Spivot, played by Shantel VanSanten. Patty was a love interest for the Wally West version of The Flash and worked in Barry’s old job at the lab. Speaking of Kid Flash and later Flash, Wally West gets introduced but does not become Kid Flash this season. I strongly suspect that’s coming soon. He’s a bit older than he was in the first comics and played by Keiynan Lonsdale.

We get to visit Earth-2, which is a modern art-deco version of our world. It’s an expansion of the nice production design that separates this show from Arrow even though they share the same universe. Central City is brighter, and now we have two very distinct versions to play in.

Another aspect of the Wally West Flash comics is the idea of the Speed Force. It got to be rather all-consuming in some years, and I hope that doesn’t happen here. It’s a spiritual entity that has a will and provides speedsters with their powers. It’s also a place that is akin to heaven for speedsters. In the comics Wally didn’t want to leave but returned for Linda Park. Here it’s Iris who brings Barry out of the Speed Force. This can get very complicated and burden the show with too much mystical mythology. I advise the writers to tread carefully here so that this show doesn’t get lost in abstract mystery at the expense of how much fun the show has been to date.

There are short features on some of the characters. Jay Garrick, Lewis (Daddy) Snart, Firestorm, King Shark, Dr. Light, Grodd and, of course Zoom.

There are 2-3 minute f/x features on specific scenes.

Barry And Iris – New Beginnings: (7:35) This feature looks at the relationship between the characters but is really one of a couple of Season 1-specific features.

Christmas In A Flash: (4:36) A look at the really fun Christmas episode. I might have to add this to my Christmas Eve tradition.

Chasing The Flash – The Journey Of Kevin Smith: (51:40) This is pretty much a Kevin Smith talk-fest that is about his stint directing an episode this season but is more about his musings on life. Kevin Smith fans will be happy.

I’m not sure if many of you remember the 1990 show that starred John Wesley Shipp as the Scarlet Speedster. That show was a little more camp than the hero shows of this decade. That doesn’t mean that Warner forgot about it or the legion of fans who loved the show. They’ve taken a rather unprecedented move of incorporating characters and actors from that series and bringing them into this latest version of the hero on television. John Wesley Shipp gets quite a huge homage both to the 1990’s show and the comics in the season finale. It’s one of the best comic book geek moments in the series. Finally Amanda Pays returns in a couple of episodes as Dr. Tina McGee, who was Shipp’s partner in the first show and now reprises the character in a rather different role. The Flash is one of those characters that has flown just under the radar for decades. This incarnation has changed all of that. Grant Gustin has brought the character back to life in the most “fun” comic show on television. “I think that has been well established.”

Gino Sassani is a member of the Southeastern Film Critic's Association (SEFCA). He is a film and television critic based in Tampa, Florida. He's also the Senior Editor here at Upcomingdiscs. Gino started reviewing films in the early 1990's as a segment of his local television show Focus. He's an award-winning recording artist for Omega Records. Gino is currently working on his 8th album Merchants & Mercenaries. Gino took over Upcomingdiscs Dec 1, 2008. He works out of a home theater he calls The Reel World. Favorite films: The Godfather, The Godfather Part II, The Body Snatcher (Val Lewton film with Karloff and Lugosi, not the pod people film), Unforgiven, Gladiator, The Lion King, Jaws, Son Of Frankenstein, The Good, The Bad And The Ugly, and Monsters, Inc.
Live At The Orleans Arena Las Vegas (Blu-ray) Tuesday Round Up: September 13, 2016