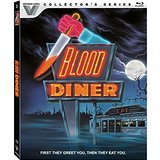 “Warning! The truly unusual motion picture you are about to see contains many scenes of graphic violence. It is not intended for the faint of heart, nor the young and impressionable.”

Anyone who makes it all the way through 1987’s Blood Diner — a gleeful, inspired exercise in bad taste — can’t say they weren’t warned. That being said, the tongue-in-cheek disclaimer that precedes the film still may not be enough to prepare you for the utter silliness and depravity that follows.

“While it is a sad fact that mass homicide and practitioners of blood cults infest our society, the producers of this film wish to express that they do not condone, nor do they want to inspire any of the human butchery or violence portrayed in this film. If you feel you will be offended by such material, please leave the theatre at once…”

Michael (Rick Burks) and George (Carl Crew) are a pair of impressionable young brothers. They’ve been brainwashed by their Uncle Anwar (Drew Godderis), who happens to be a serial killer. We meet the boys during a madcap prologue that also features Uncle Anwar being gunned down by the police. The action jumps forward 20 years with Mikey and Georgie digging up and reviving Uncle Anwar, who tasks them with completing his mission of resurrecting the ancient Lumerian goddess Sheetar. I should also probably mention that the resurrected Uncle Anwar takes the form of a talking brain that is kept in a jar.

To complete their mission, the boys must stitch Sheetar together from the body parts of immoral women followed by the sacrifice of a virgin during a “blood buffet.” Fortunately for them, the boys own a very popular diner that gives them access to a bunch of potential victims. The diner also allows the psychotic siblings to dish out some macabre meals to unsuspecting customers. Will Mikey and Georgie be able to complete Uncle Anwar’s misson before being busted by a pair of mismatched detectives (Roger Dauer and LaNette LaFrance)? Also, did you catch the part where the two main characters communicate with their dead uncle…who is an angry, talking brain in a jar?!?!

One of the great things about Blood Diner is that Resurrected Uncle Anwar starts to seem normal after a while and may not even crack the list of Top 5 craziest things that happen in this flick. (I really don’t want to spoil any of the mayhem, but a murder involving a deep fryer leaps to the front of my mind.) The movie is ostensibly a spiritual sequel/loose remake of 1963’s Blood Feast, but it very much ends up being its own bizarre creation.

“All of the mutilations, bodily dismemberments and cannibal rituals were performed by seasoned professionals.”

Blood Diner has way more in common with Peter Jackson’s early work (Bad Taste, Meet the Feebles) and Sam Raimi’s outrageous Evil Dead sequels than it does with any traditional horror film. The movie really does play like your traditionally goofy and raucous ’80s comedy, except this one happens to have copious amounts of death and dismemberment. The good news is director Jackie Kong and screenwriter Michael Sonye display a healthy awareness of the humor and silliness of their story.

For example, one victim throws away a chance to escape death because she decides that going back to retrieve her purse is a good idea. If Blood Diner were released today (a near impossibility, by the way), the movie would almost certainly be accused of misogyny for its gratuitous nudity and the way the story targets “immoral women.” But besides the fact that the film was actually made by a woman — check out the special features for an interesting sit-down with Kong — political correctness of any kind is never the point in Blood Diner.

The movie’s ultra-slim budget meant the production team had to hire non-Screen Actors Guild members for its cast, which meant casting interesting personalities with no experience. Burks (who died two years after the movie was released) and Crew make for a wacky, watchable pair, with Burks playing straight man to Crew’s crazy antics. The insane, over-the-top nature of the story helps cover up most of the bad acting — I mean, Daniel Day-Lewis probably couldn’t sell some of these lines — but a few of the performances (most notably, LaFrance’s stilted work as Det. Sheba Jackson) remain painful to watch.

Blood Diner also crams in some unnecessary storylines, including Geogie’s wrestling obsession, and a rival equally-insane diner owner obsessed with stealing Mikey and Georgie’s “secret recipe.” That being said, the movie still clocks in at a slim 88 minutes and those superfluous subplots end up adding to the delirious WTF nature of the whole thing.

Blood Diner is presented in an aspect ratio of 1.85:1. The 1080p image is arrived at with an AVC MPEG-4 codec at an average of 27 mbps. This is a reasonably clean, blemish-free presentation. Fine detail is not what anyone would call razor sharp — in fact, the picture is a bit hazy in a few instances — but it’s nevertheless quite good for a nearly 30-year old film made on a shoestring budget. (The gruesome kills still stand out from a visual standpoint.) Colors — especially the blood reds — don’t quite pop as much as you’d hope, but that’s more of a function of the film’s age than anything having to do with what this disc has to offer. Black levels could be inkier, but this comedic movie doesn’t live in the shadows as much as other horror titles. Nevertheless, I’m sure this is the best Blood Diner has ever looked.

The original monoaural (DTS-HD Master Audio 2.0) track packs a pretty good wallop, despite its inherent limitations. The impact can especially be felt during the sequence where George takes part in a wrestling match. The music includes a mixture of doo-wop and the synth-ier tendencies in Don Preston’s score. There are no pops or hisses on this track. Though the dialogue can sometimes sound ever so slightly hollow, it is always clear and intelligible.

All of the bonus materials — except for the two TV Spots — are presented in HD.

Audio Commentary with director Jackie Kong: The filmmaker largely focuses on technical talk (which is especially illuminating considering the movie’s severe budgetary restrictions) while mixing in funny stories. While the director displays a healthy sense of humor about this ridiculous movie — Kong regards the story’s two leads as a pair of nice guys who happen to be building a female Frankenstein monster — there’s also a clear sense of pride about creating this outrageous, controversial material. (Kong brags about coming up with a gun-toting maniac in a rubber Ronald Reagan mask years before Point Break.)

Killer Cuisine — The Making of Blood Diner: (1:04:31) This excellent Making Of is divided into five parts.

Open for Business features screenwriter Michael Sonye and producer Jimmy Maslon describing the genesis of the movie (it was supposed to be a sequel to 1963’s splatter classic Blood Feast). Queen Kong is my favorite portion and features the director granting a candid, rare one-on-one interview. (Part of the reason she agreed to the on-camera chat was to prove that it was a woman who crafted this insanity.) The Cook, The Uncle, and The Detective includes comments from actors Carl Crew (Georgie), Drew Godderis (Uncle Anwar), and Roger Dauer (Det. Mark Shepard). Scoring for Sheetar highlights the work of composer Don Preston, while You Are What They Eat! features input from cinematographer Jurg Walther.

Archival Interview with project consultant Eric Caidin: (8:01) The late owner of Hollywood Book and Poster — this interview was recorded in 2009, but Caidin died in 2015 — talks about helping develop Blood Diner, including brainstorming unique murders with the rest of the creative team. (Caidin giddily grabs credit for coming up with the bit where a guy’s head is crushed by a bouncing low-rider.)

Despite being made almost 30 years ago, Blood Diner — which is part of Lionsgate’s “Collector’s Series” of Vestron Video releases — still has the ability to both surprise you and make you shake your head in amused disbelief. (Mostly, it’s the latter.)

Obviously, the movie won’t be for everyone and you’ll definitely have to overlook its many technical deficiencies. But if you’re looking for a bloody good time — which is something that is sorely lacking in modern horror — you should sample this Diner.