Posted in: Disc Reviews by Brent Lorentson on December 30th, 2016 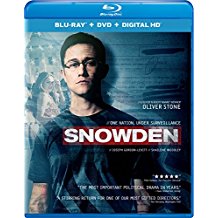 It’s been just about four years since Savages (2012) hit the big screen.  For me Savages was Oliver Stone simply having a blast, shooting an over-the-top action film fueled by sex, drugs, and violence.  Now it seems Stone has stepped back into the paranoid, government-conspiracy form that he seems to be best known for with Snowden.  Whether you view him as a traitor to the United States or a self-sacrificing lamb to expose the government and its illegal wiretapping, it’s a choice that is up to you going into this film.  Personally, while I feel his intentions were good, still, he did betray his government and committed treason.  What I had hoped with this film is that Oliver Stone would capture both sides of the coin, but as the title would suggest, Edward Snowden (Joseph Gordon-Levitt) is front and center on this ride, and that’s not my only problem here.

When we first meet Snowden, he’s locked away in a Hong Kong hotel room getting ready to give an interview to two journalists, Glenn Greenwald (Zachary Quinto) and Ewan McAskill (Tom Wilkinson) along with documentarian Laura Poitras (Melissa Leo) to film the event.  It’s this interview that sets up the rest of the film that is told mostly in flashback form.  The dynamic of this opening sequence works so well simply because of the elevated bar of talent on the screen; it sets up for what one could only expect will be filled with snappy dialog exchanges as these figures discuss what Snowden is about to unleash to the world.  Instead we get a whimper of what could have been.

The flashbacks begin back when Snowden was first in basic training with the Army reserve and finds him getting injured during training.  It’s put out there and hit over the audience’s head how much Edward Snowden loves his country and is willing to sacrifice his life for it.  There’s nothing wrong with this at first, but it’s a problem that the film can’t seem to stop reminding us.  When becoming a soldier is not an option, Snowden goes through the interview process to eventually become a spy for our government.  Corbin O’Brian (Rhys Ifans) is tasked with training the new recruits; Ifans seems to be channeling a bit of Humphrey Bogart with this role and has one of the best performances in the film.  As Snowden takes the tutelage from O’Brian, it’s another professor, Hank Forrester (Nicolas Cage) that Snowden takes more of a shine to, and it’s in early conversations between the two that we learn of an invention that was created that is able to hunt through emails anywhere that contain certain keywords. This of course is only the start of what Snowden begins to uncover.

The spy storyline is only part of the story here, because a large portion of the film is also about Snowden’s relationship with girlfriend Lindsay Mills (Shailene Woodley).  When we first see this couple together, Snowden is the all-American patriot who wouldn’t dare to question his government or its President. Lindsay, on the other hand, is a free spirit who has an infectious way about her that slowly begins finds cracks in Edward’s armor and eventually leads him to question the actions of his government.

As the stories of Edward’s career with the NSA and his relationship unfold, one thing is made clear from the get-go: Snowden is a martyr who is doing this because he’s a great American.  Now it’s one thing to think this, but it’s another to make a film that seems to lack any transparency on the matter.  We don’t get to see the government defense of these actions; we don’t get to see any moral conflicts for Edward to face that don’t result in that he is a martyr releasing the information for the greater good. Again, I’m not saying he’s right or wrong for what he did, but this film is so unapologetically a love letter to Snowden that I find it hard to take this film seriously.

What frustrates me most is with all the talent that is stuffed into this film, and many do put in some solid performances, the result is that we get a dull film with just a bunch of people talking.  OK, I never thought I would say this about an Oliver Stone film, but this film runs at about 135 minutes, and it could easily be trimmed down a good thirty minutes. Most surprising is that if you didn’t go in knowing who directed this, you wouldn’t walk out knowing you just saw an Oliver Stone film.  This is a guy with such a distinct style that I desperately wanted to see injected here, but instead it just felt uninspired.  By the time the film decides to pick up some energy in the third act, it’s already too late.

Snowden is presented in its original aspect ratio of 2.40:1. The 1080p image is arrived at with an AVC MPEG-4 codec at an average 30-35 mbps. Stone sets out to create an almost documentary style to the film. That is greatly reflected in this high-definition image presentation. Colors are very natural with a pretty much neutral color temp. The Hawaii locations offer some nice lush color. Mostly there is a sterile environment to the interior shots of the film. Black levels are pretty strong.

The DTS-HD Master Audio 5.1 is obviously going to be quite strong with dialog. That’s the focus of the film, and naturally the strength of the audio presentation. Surrounds offer mostly subtle ambient sounds. There’s a nice even sub level that adds depth to the dialog. The score isn’t dynamic, nor is it in any way dominant.

Deleted Scenes: (8:50) There are six with an optional play-all ability.

Finding The Truth: (3:57) This is nothing more than an extended trailer with some very brief cast and crew sound bites.

Snowden Q&A: (40:58) It’s a panel that features Edward Snowden on a video monitor via the internet. We also get Oliver Stone, Joseph Gordon-Levitt, and Shailene Woodley answering questions. The focus is never the movie but Snowden.

Snowden was originally slated for release last year and got delayed a couple times. This usually isn’t a good sign, but Stone is a director who has earned my faith in his abilities, and I never would have doubted him. This unfortunately was a miss.  I’m still going to give this a second viewing, but I’m fairly certain my mind won’t be changed on this. After watching some interviews recently with Edward Snowden, I can appreciate Levitt’s performance even more, but overall, this is one of the big misfires of the year.

Brent Lorentson is a horror writer and film critic based out of Tampa, Florida. With a BA in Digital Film, he co-wrote and co-directed Scavenger Hunt. His short stories have appeared in various horror anthologies. In 2019 his short script Fertile Blood will be a part of the anthology horror film Slumber Party. He is currently working on his first novel A Dark and Secret Place set to be released in late 2019. Favorite Films: Taxi Driver, Fight Club, I Saw the Devil, The Wild Bunch, Dawn of the Dead, A Clockwork Orange, Pulp Fiction, Heathers, The Monster Squad, and High Fidelity.
12 Days Of Christmas Giveaways – Day 6: Greenleaf Season 1 From Lionsgate 12 Days Of Christmas Giveaways – Day 7: Time Life Bag Of Goodies