Posted in: Disc Reviews by Gino Sassani on February 2nd, 2017 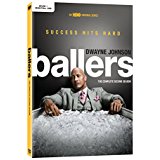 American football has been making the news of late, and not just in the sports pages. For the last couple of years there has been an increasing concern for players’ safety. From our former president declaring he wouldn’t let his fictional son play the game to the hard-hitting Will Smith film Concussion, football has taken some heat over its violent nature. Players are retiring early, and the subject of life after football becomes more of a social question than ever before. That’s where HBO’s Ballers comes in. It’s a half-hour look at the NFL from the player perspective, both current and retired. It’s intended as a light bit of dramedy, and it certainly is that. Even so, the series doesn’t hide from some of the brutal realities of the sport, from the trappings of fame and fortune to the realities of its eventual end.

Meet Spencer Strasmore, played by Dwayne “The Rock” Johnson. Spencer was a star defensive player for the Miami Dolphins. In his retirement years he has joined a financial advisor firm, teaming up with buddy Joe, played by Rob Corddry. Together they are charged with getting their NFL buddies to sign up with the firm. What Spencer ends up being is a fixer to his former friends and clients, mostly trying to help them get out of their own way. This season he is plagued by a hip injury that should be replaced. Of course, he’s having trouble dealing with a hip replacement at 41. The guys also have a new pain in the rear in Andy Garcia’s Andre Allen, who owns the largest agency in Miami. When Spencer and Joe decide to poach one of his clients, it turns into a war that the guys can’t win.

The clients and friends, of course, provide much of the show’s humor and drama.  The best emotional beats can be found with Charles Greane, played by Omar Benson Miller. He’s finding out that his one-year return is going to be the end of his playing career. He’s the most innocent character in the series, and you can’t help rooting for the guy. When he gets hired to join the staff in Miami, this mild-mannered guy has to deliver news to players when they get cut. He’s got a new child, and this guy is really delivers heart to the series. To some he might be a boring character because there aren’t any hot chicks, drugs, or ego drama. But he’s more like us than anyone on the show. He’s relatable.

There’s current superstar Vernon Littlefield (Carter). Spencer is working with an agent to keep him in Dallas, but his loyalty to his old friend Reggie (Brown) gets in the way. A paintball injury could get him cut. Reggie likes strutting around like a bigshot, and Vernon is his meal ticket. He feels threatened by anyone else’s influence. Ricky Jarret (Washington) has a secret mansion that’s his own fun world complete with hookers and drugs. You know that’s going to cause trouble. He’s a free agent who doesn’t really want to leave but has to chase the offers. It doesn’t help that his father gets in the way. West Wing veterans Dule Hill and Richard Schiff play Dolphins GM and owner of the financial company respectively.

The season has a little less to do with the football aspect. It’s the off-season and draft time. That brings the new client into the fold. He’s Travis Mach, played by Adam Aalderks. This guy wants to go top five, but he has a big party and attitude problem. He’s likely inspired a bit by the Johnny Manziel situation. The problem is that Spencer can’t “officially” work with the kid because he is having trouble getting certified by the player’s union because of a money loss he’s been hiding from Joe. Eddie George guest stars as one of the guys he lost money for. It makes for quite an emotional confrontation and nice performances from Johnson and surprisingly from Eddie George. This continues to be some of the best acting Johnson has delivered.

If you’re expecting a football show, you will be disappointed. There’s very little actual game material. The show uses the NFL’s public image to use the team logos and images without actual NFL approval. ESPN had a football show and did not use the official NFL symbols because of the money invested in broadcasting games. The NFL appears to be ignoring the use here. Johnson provides a rather endearing character in a pretty light atmosphere. It’s actually some of The Rock’s best stuff just because of the casual nature of the performance. There’s no macho or action stuff to live up to here, and it works in his favor. The background could be any kind of celebrity from actor to musician. The problems are pretty much generic fame kinds of things. But that might be a letdown if you’re hoping for football.

Each episode is presented in its original broadcast aspect ratio of 1.78:1. The 1080p image is arrived at with an AVC MPEG-4 codec. The Miami locations provide for a bright and colorful high-definition image presentation. You get plenty of detail, because there are only five episodes per disc, so we get a nice healthy bit rate. The image is sharp and detailed. Character close-ups are pretty reference. Black levels don’t play into the image much. Textures are a little too smooth, but the image looks pretty good overall.

The DTS-HD Master Audio 5.1 isn’t there to impress anyone. The dialog is pretty much the focus here. Musical cues often come from source and sound dynamic enough.

An Inside The Episode for each episode. They run about two minutes each.

There’s less football but actually more story here. You see less of the NFL logos, which make me think some kind of a compromise might have been reached here. But I really like the story of Spencer trying to turn things around and make some rather bold moves. No doubt Andy Garcia adds a lot to the season and is a solid foil for Johnson. The two have pretty good chemistry, and I liked this season overall better than I did the first. It’s guilty pleasure territory, to be sure, “but minus the bedbugs and bloodstains“.

Gino Sassani is a member of the Southeastern Film Critic's Association (SEFCA). He is a film and television critic based in Tampa, Florida. He's also the Senior Editor here at Upcomingdiscs. Gino started reviewing films in the early 1990's as a segment of his local television show Focus. He's an award-winning recording artist for Omega Records. Gino is currently working on his 8th album Merchants & Mercenaries. Gino took over Upcomingdiscs Dec 1, 2008. He works out of a home theater he calls The Reel World. Favorite films: The Godfather, The Godfather Part II, The Body Snatcher (Val Lewton film with Karloff and Lugosi, not the pod people film), Unforgiven, Gladiator, The Lion King, Jaws, Son Of Frankenstein, The Good, The Bad And The Ugly, and Monsters, Inc.
The Man Who Fell To Earth: Limited Edition (Blu-ray) Pinocchio: Walt Disney Signature Collection (Blu-ray)