From Dusk Till Dawn: Season 3

Posted in: Disc Reviews by Brent Lorentson on February 10th, 2017 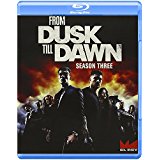 Season 1 of From Dusk Till Dawn gave us a ten-episode remake of the hit original movie while setting up a mythology to stretch its story over numerous seasons. Season 2 took us deeper into the culebra syndicate, and we got to see how they operate in their world as Carlos (Wilmer Valderrama) searched for an ancient blood source and sought to sit at the throne as the leader of all the culebras (a snake/vampire hybrid of sorts).  All while the baddest outlaws North and South of the border, the Gecko brothers Seth (D.J. Cotrona) and Richie (Zane Holtz) were forced to work out their differences ever since Richie was made a culebra.  Things have definitely taken some drastic turns from the original film, and I’m more than happy to say that Season 3 continues down its blood-soaked, horror western path, and this time it leads our band of misfit anti-heroes to take on a new enemy that is straight out of hell.

As we catch up with Seth and Richie they are stuck being collectors to the Lords (basically ancient leaders of the culebras), they’re not happy being bagmen and being at the bottom of the totem pole, but they really don’t have much of a choice.  That is until a new breed of villain steps in, the xibalbans.  The xibalbans are pretty much demons straight out of hell that use the culebras as slaves in their world.  The introduction of the xibalbans also re-introduces us to Kate (Madison Davenport). Last time we saw her she was left for dead before some ancient blood got into her system  As it turns out this ancient blood contained Amura, the queen of hell, and she is who has possessed Kate.

In case you haven’t realized it yet, this really isn’t a show you can just walk into without seeing the previous seasons.

Making matters worse for the Gecko brothers and the culebras, when the famed Titty Twister bar was destroyed, this released several xibalban creatures that had been held prisoner in the temple for centuries.  Personally it’s the creatures that are introduced over the span of the season that have me excited for this season.  Season 3 really is basically a monster movie of the week while connecting a longer story as a whole. To help fight these xibalban monsters, the Gecko brothers enlist the help of Burt (Tom Savini), a retired monster hunter who now has his own underground pot dispensary.  For those of you who may have forgotten, he also played the original Sex Machine character that Jake Busey now plays in the show; it’s amusing how we see more winks and nods to the film with this introduction.

Freddie aka Peacekeeper (Jesse Garcia) seems to be the character that has come the most full-circle over the course of the series.  Garcia brought humanity to this character when the show gets worn down with criminals and bloodsuckers. I wasn’t a huge fan of the character when the series began, but at this point he’s definitely one of my favorite characters who constantly has to struggle with making the “right” decision.  This is part of what makes Season 3 so much fun as we see humans and culebras fighting side by side as this ragtag band of misfits against the queen of hell.

While having the monsters fill up the time in each of the episodes is fun, after some time it does seem to become obvious that they are simply padding to stretch this storyline out for ten episodes.  The arc of the show this season is clearly about Amaru opening the gateway to hell, and it does seem this could have been attempted and accomplished in half the time.  There are some side plots to help carry the season, but there is nothing that feels substantial, so it only becomes more formulaic how each episode will unfold.  Personally I dig the whole monster character of the week, so I’m a little on the fence on my feelings for how this effects my experience with the show.  After all, at least the monsters we are given are pretty cool.

A favorite episode of mine brings the Gecko brothers across the border to a Mexican prison that houses the worst of the worst criminals that are human alongside culebras that have been behind bars for centuries.  But my favorite addition to this season, the point where I feel the show took it to next level of geeky awesomeness is when we get to meet Zolo, a jaquar warrior from hell, played by Marko Zaror.  The show has already had some fun fight scenes, but Zaror is simply amazing to watch as he does over-the-top spin kicks and flips off walls without the aid of wires; the guy is just an amazing natural talent to watch.

While I really enjoyed this season, the bummer is I’m not sure if there are going to be any more adventures with the Gecko brothers for this series or what will happen next.  When the season comes to a close, it very much feels like it is the end of the series. Don’t panic; I’m not implying death and dismemberment to all the characters, but the show has seemed to of come to its end.  With a little research it also seems the cast has been released from their contracts, so what does this mean for the show?  There are definitely more stories that can be told, so as a fan I hope that perhaps we may only have to wait a little longer for new episodes, but if the show has come to a close, it at least has a pretty awesome way for the series to hang its black hat.

From Dusk Till Dawn Season 3 is presented in a 1.78:1 aspect ratio.  The 1080p image is arrived at with an AVC MPEG-4 codec at an average of 30 mbps.  This is a sharp-looking series. Even with some of the bad color grading in flashbacks, I still like the overall look of this film.  A lot of detail is captured here, and you can really appreciate some of the visual effects on display.  Even though red may be the color that rules the series, the black levels have a definite separation and look good.

The DTS Master Audio 5.1 track is the quality you would come to expect from a big-budget blockbuster film.  The show thrusts you into one of its many action sequences with gunfire the impact hits come through great, but it’s those nasty gory squishes along with the other monster FX that are given extra detail that come through for the proper immersive experience.  The dialog is clear throughout.  I’m a little more impressed with the score this time around which definitely gives a western feel to it.

Audio Commentaries:  We are given three audio commentaries for episodes 1, 9, and 10.  The commentaries for 9 and 10 are led by the director of both episodes Joe Menendez, with Executive Producer Carlos Coto and Actor Brandon Soo Hoo, and for the first episode Executive Producer Diego Gutierrez sits in with Coto.  What I love with these commentaries, is that for all three seasons they are evenly balanced with information about what into making the scenes, the back stories like the Meso-American mythology, and film references.  For the more hardcore fans of the show and budding filmmakers, this is an entertaining experience that is definitely worth checking out.

Season 3 Catch-up: (9:23) Basically this is a rundown for what the Gecko brothers, the Fuller family, and Freddie Gonzalez have been up to from the start of the series till now.  It’s a fun refresher to check out if there has been some time since you’ve last revisited the show, but there is no new information here.

Featurettes: (7:38) Four brief mini-features here that give us a little glimpse into some creatures that are appearing in the show and the return of some familiar characters.  There’s nothing really deep here; basically this is something that would have been used to promote the episodes before they aired.

Inside the Episodes:  (7:24) Another collection of four features that does pretty much the same thing; this one at least gives us a little behind-the-scenes footage and some interview snippets.

Season 3 Best Kills: (1:26) Well, this is a montage of some of the kills in the show; thankfully they don’t reveal all the great ones, but there are a few that are pretty fun to revisit.

When Sex Machines Collide: (2:18) A brief segment in which Jake Busey and Tom Savini talk about their takes on the role and their scenes done together over the course of the season.

Evolution of a Fight Scene: (2:54) Personally this is my favorite segment, and I wish it was so much longer.  Here we get to see how one of the fights was put together between Zane Holtz and Marko Zaror.  For those not familiar with Zaror, prepare to have your eyeballs explode from how cool this guy is and without any wire work or CGI.

Deleted Scene:  This basically sets up a scene we later see in the final episode; it’s a little spoiler-heavy to a degree, but to be honest, I wish it hadn’t been cut, because it would at least give more context to the scene we actually see in the episode.

This show started out as a guilty pleasure, but at this point I have no shame in saying how much I enjoy this series.  Season 3 may feel a bit too movie-of-the-week for some, but for me that’s what I love most about it.  I really hope this isn’t the last season. I’d love to see the show pick up and reinvent itself and give us more crazy adventures with the Geckos and the monsters that fill their world.  For those that love horror and action, I don’t know what more you can ask for, because Season 3 delivers on all cylinders.

Brent Lorentson is a horror writer and film critic based out of Tampa, Florida. With a BA in Digital Film, he co-wrote and co-directed Scavenger Hunt. His short stories have appeared in various horror anthologies. In 2019 his short script Fertile Blood will be a part of the anthology horror film Slumber Party. He is currently working on his first novel A Dark and Secret Place set to be released in late 2019. Favorite Films: Taxi Driver, Fight Club, I Saw the Devil, The Wild Bunch, Dawn of the Dead, A Clockwork Orange, Pulp Fiction, Heathers, The Monster Squad, and High Fidelity.
John Wick (UHD Blu-ray) (4K) Come What May (Blu-ray)