Diary of a Wimpy Kid: The Long Haul (Blu-ray) 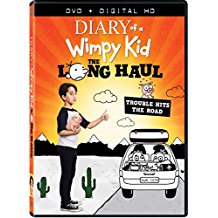 Reboots are all the rage in Hollywood, in case you haven’t heard. Even a relatively low-key property like the Diary of a Wimpy Kid Cinematic Universe series isn’t immune. Based on the wildly popular books by author Jeff Kinney, the first three movies featured the same core group of likable actors and become rock solid hits made on modest budgets. So you can understand why Fox would want to keep the series going, even if original star Zachary Gordon became too old to play the perpetually put-upon (and middle school-aged) Greg Heffley. This latest offering features an all-new cast, but too much of the same cringeworthy and juvenile humor; it’ll make you wish someone had hidden the reset button from this franchise.

“If there’s one thing I’ve learned from my years of being a kid, it’s that you have zero control over your own life.”

Jason Drucker settles in for The Long Haul as the new “Wimpy Kid” in town. The movie opens with the latest humiliation in our protagonist’s life: a video of Greg (Drucker) fishing a diaper out of a ball pit at goes viral and leads to some unwanted internet celebrity. (Greg earns the nickname “Diaper Hands.”) On top of that, Greg’s parents Susan and Frank (Alicia Silverstone, Tom Everett Scott) are dragging Greg, doltish older brother Rodrick (Charlie Wright) and toddler-aged younger brother Manny (Wyatt and Dylan Walters) on a cross-country road trip for their Meemaw’s 90th birthday party. To make matters even worse, the kids’ mom insists everyone hand over their cell phones!

“So who’s excited about the Great Heffley Road Trip?”

Fortunately for Greg, Meemaw’s birthday party isn’t too far from the Player Expo where Greg’s favorite gaming celebrity is slated to make an appearance. As a result, Greg’s plan is to try and meet his gaming idol and appear in a video alongside him so he can shake off his Diaper Hands image for good. All he has to do is survive a family road trip that includes aggressive seagulls, destructive piglets, and a number of run-ins with a family led by a bearded weirdo (dubbed “Beardo”).

The philosopher David Wooderson once opined, “That’s what I love about these high school girls…I get older, they stay the same age.” It’s been precisely a decade since the first Wimpy Kid book was published and we were introduced to middle school middle child Greg Heffley, the ultimate anxious everyman. (Greg can also be pretty darn selfish and sneaky, by the way.) The first Wimpy Kid movie came out in 2010, and the three subsequent sequels (Rodrick Rules, Dog Days, and now The Long Haul) have kept all the characters in an ageless bubble. While that might work for the book series — and it obviously hasn’t hurt The Simpsons after almost 30 years — it’s well past time for the big screen version of the Heffley’s to grow up, at least figuratively if not literally.

The “Wimpy Kid” series is at its best when it makes relatable childhood catastrophes seem like the worst thing that could ever happen to anyone. Part of the problem in The Long Haul is that Greg’s internet infamy is an objectively awful humiliation…and not really all that relatable. And even though this movie brushes up against some interesting ideas — Greg points out that his mom can’t relate to what it’s like being a 21st century kid — they are consistently drowned out by bird poop, piglet farts, and a bunch of other slapstick nonsense.

David Bowers took over the Wimpy Kid franchise starting with the second movie, and it might be time for an infusion of new blood in the director’s chair as well. The Long Haul aims to be a family-friendly version of National Lampoon’s Vacation, but doesn’t have the flair or imagination to deliver memorable road trip goodness. We do get a random homage to the shower scene from Psycho, which seems like an odd choice for a movie that otherwise seems to be completely tailored toward children.

Drucker is okay as the new Greg, but Wright is consistently painful to watch as the new Rodrick. Besides being written as a whiny doofus, Wright’s line readings are often stiff and his comedic timing is questionable at best. Silverstone doesn’t have much to do besides nag as the family’s mother hen, while Scott at least finds some space to have a little fun as the dorky, workaholic patriarch.

Diary of a Wimpy Kid: The Long Haul is presented in an aspect ratio of 2.40:1. The 1080p image is arrived with an AVC MPEG-4 codec at an average of 28 mbps. The film pops from a visual standpoint starting with its opening scene, which is set at the Chuck E. Cheese-like “Corny’s” family restaurant (which features the ball pit where Greg’s diaper gaffe goes viral). The image remains bright and pleasing throughout. Although the Heffleys are supposed to be traveling cross country, the film was shot in Georgia. As a result, the movie’s visual palette isn’t quite as varied as it could/should be. However, flesh tones are consistently nice and warm and the image is unfailingly sharp. (Probably too sharp for viewers’ tastes during a vomiting gag at the county fair.) The film also features brief and intermittent black and white animations that reproduce the simple style of the book’s drawings. These sequences are as clean and vibrant as the rest of the movie’s visual presentation, which is probably the best thing about this Blu-ray release.

The DTS-HD Master Audio 7.1 track is probably overqualified for this goofy family road trip comedy. To be fair, you do feel the muscle of the extra channels. The jaunty score by Edward Shearmur gets a nice boost, while the film’s cartoonish sound effects pack an extra wallop thanks to some subtle work on the bottom end. But even though we get some great rear speaker activity during the county fair and Player Expo sequences, a surprisingly high percentage of the movie’s run time is spent in the crowded Heffley Family vehicle or some cramped hotel room, which doesn’t take full advantage of this disc’s impressive track.

Making a Scene: (12:20) Three mini-docs focus on different aspects of the production, including casting the film’s adorable piglet, the “alien abduction” ride at a real county fair in Georgia, and the seagull attack inside the Heffley Family vehicle. (FYI: no actual bird poop was applied on any actor’s hair.) Features a Play All option.

Greg Heffley’s Ten Rules for the Perfect Road Trip: (3:03) The film’s protagonist offers tips based on his own misadventures in the film, including “Create a Perfect Playlist,” “Secure Your Belongings,” and “Schedule Potty Breaks.”

Road Games: (3:53) These car games are also inspired by the action in the movie. They include “Road Trip Bingo,” “20 Questions,” and “Rodrick’s Shopping List,” where you try to alphabetically name items the movie’s dense older brother might eat.

Learn to Draw: (14:26) Author Jeff Kinney offers helpful and detailed tutorials for how to draw the book versions of Greg, Rodrick, Manny, Rowley, and Pig.

A Decade of Wimpy Fun: (13:26) My favorite special feature in the bunch offers a brief history of the “Wimpy Kid” phenomenon. Kinney talks about being inspired by his own junior high school experiences as a “sweet, invisible kid” and initially posting his stories online. The first “Wimpy Kid” book was published in 2007, and the 12th(!) book in the series is set to be released in later this year. Not bad for a guy who didn’t set out to write children’s books.

Bloopers and Deleted Scenes: (4:34) A curious combination of the usual gag reel fodder (silly faces and flubbed lines) and footage not in the film (more time at Meemaw’s birthday party).

Deleted Animation: A pair of animated sequences done in the style of the book’s art. “Perfect Family” (0:42) has Greg bemoaning the fact that his family doesn’t resemble the ones in his mother’s favorite magazine, while “Boat” (0:42) offers a bit of background on the unused vessel the Heffleys tow along for their road trip. Oddly enough, these are presented as separate chapters and there is no Play All option.

Haulin’ Through Georgia: (2:19) Cast and crew filmed in various parts of Georgia, and they all have glowing things to say about the state’s scenic versatility. (Georgia was required to stand-in for various states since the Heffleys are supposed to be traveling from New England to Indiana.)

Unfortunately, this franchise might not be built for The Long Haul since this was by far the lowest-grossing movie in the Wimpy Kid series, barely cracking $20 million.

Even though this Fox Blu-ray delivers a pleasant image and a few solid special features, I can’t recommend you go out and grab this one unless you’re a die-hard “Wimpy Kid” fan.