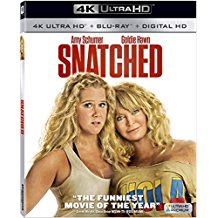 It’s not that hard to understand why Hollywood icon Goldie Hawn came out of semi-retirement to star in Snatched alongside comedian Amy Schumer. The South American-set mother/daughter comedy filmed in picturesque Hawaii, and Schumer was a hot box office commodity coming off the successful Trainwreck. (Holy oxymoron!) I just wish Hawn’s first movie in 15 years — a co-headlining gig, no less! — wasn’t such a wildly uneven effort. Because even though Snatched doesn’t fully utilize the talents of its legend, it’s apparent that Goldie’s still got it.

Emily Middleton isn’t exactly a stretch from Schumer’s real-life persona: in short, she’s a boozy, foul-mouthed mess. Within the movie’s first 15 minutes, Emily has lost her job and her boyfriend Michael (Randall Park). Unfortunately, she and Michael were supposed to go on a vacation in Ecuador. Rather than let the trip to go to waste, Emily convinces her overly cautious mother Linda (Hawn) to accompany her to Ecuador after finding an old photo album that revealed Linda was actually fun once upon a time. After a suspiciously handsome stranger hits on Emily at a bar, the mother-daughter duo become involve in a kidnapping plot.

“What followed was a tale of violence, mayhem, and the reckless disregard for human life…the kidnappers did bad stuff too.”

The director here is Jonathan Levine (Warm Bodies) and I’m sorry (and kind of surprised) to say the movie doesn’t really deliver on the “violence, mayhem, and reckless disregard for human life” promised by the opening title card. Snatched is rated R — not surprising at all for a movie starring Schumer — but instead of taking advantage of that rating to deliver inspired and over-the-top action/comedy thrills, the movie opts to focus on gross-out gags and raunchy one-liners.

It’s not a great sign that the movie’s signature sight gag (besides a drunken wardrobe malfunction courtesy of Schumer) involves a tapeworm being extracted from Emily’s body in excruciating detail. And even though Schumer manages to get off some good one-liners — particularly during Emily’s childish arguments with agoraphobic brother Jeffrey (Ike Barinholtz) — Hawn doesn’t get to play nearly as much in the swearing sandbox. (Save for a mini-meltdown Linda has about halfway through the movie.) Heck, Wanda Sykes — as the annoyingly chatty half of a pair of fellow American tourists; a mute Joan Cusack is her companion — gets to cut loose more than Hawn, but Sykes is more irritating than funny.

That being said, Hawn makes for an amusingly maternal foil for the much crasser Schumer. Although Linda’s mousy demeanor inevitably stifles Goldie’s natural glow, she shares solid chemistry with Schumer and they make for a convincing odd couple mother-daughter pair. I wish Snatched hadn’t kept its two stars apart as much as it does! I also enjoyed Barinholtz’s commitment to his momma’s boy character, and Christopher Meloni’s oddball turn as an adventurer with dubious qualifications.

The script by Katie Dippold includes some funny flourishes, including a comically laid-back U.S. State Department and a recurring gag that has Emily inadvertently killing a dangerous kingpin’s closest relatives. I also enjoyed the fact that Emily was ultimately able to convince her mom to go on the trip to Ecuador because it was (gasp!) non-refundable.

None of that is quite enough to salvage Snatched, though. The movie has some funny moments, but is ultimately only good enough to make you wish Hawn had come out of retirement to star in something better.

Snatched  is presented in its original aspect ratio of 2.35:1. The 2160p Ultra high-definition  image is arrived at by an HEVC codec with an average bitrate of only around 45 mbps. Even with the lower bit rate there’s a lot to like about this high definition image presentation. There are some incredible establishing shots of beaches and beautiful water that comes to life with the vivid HDR color reproduction here. The jungle scenes offer some really nice detail and texture. Black levels are pretty solid. Shadow definition is good. There’s a particular — albeit brief — shot of a cloudy night sky that’s outstanding. I am surprised to find that the close-ups are where the image tends to be a little soft in sharpness. It might well be a style choice. It’s a clean image throughout.

The Dolby Atmos presentation defaults to a pretty tame 7.1 track. All of the action happens in the front and so don’t look for aggressive surrounds. Dialog is the main focus and it’s fine. The subs aren’t going to shake your room here. This isn’t that kind of a movie, but there is a rather nice bottom here that gives even this simple surround mix the illusion of being much bigger than it really is.

Deleted Scenes: (12:43) There are 10 deleted scenes total, and they include Colin Quinn’s entire performance as Emily’s dad (the comedian also played Schumer’s father in Trainwreck) and a strip poker sequence involving the movie’s mother-daughter duo. There’s also an alternate death for a supporting character that was probably cut because the CGI anaconda looked cartoonishly bad. Features a Play All option.

Extended and Alternate Scenes: (14:08) Schumer (and to a lesser extent Hawn) gets to show more of her improv chops during extended sequences for the movie’s opening scene (featuring Emily at work), Emily’s awkward breakup with her boyfriend, and the scene where Emily and Linda are offended that they’re not considered sex slave material. Features a Play All option.

Gag Reel: (2:43) We get the typical gaffes here, but also a joke about how comedies like Snatched aren’t exactly Oscar material.

Director Commentary by Jonathan Levine: This track was recorded four days before the movie opened, so Levine still sounds excited about its prospects. (The movie made a middling $60 million worldwide against a $42 million budget.) Not surprisingly, Levine lavishes praise on his cast, especially Hawn. One of the more amusing anecdotes involves a Schumer joke centered around some raunchy wordplay for the word “welcome”: the director and screenwriter Katie Dippold didn’t get it, but it ended up in the movie largely because Hawn thought it was funny.

I don’t recommend you pony up a king’s ransom to get your hands on Snatched, but I suspect Amy Schumer fans and some tight-knit mother/daughter pairs might get a kick out of this one.

Diary of a Wimpy Kid: The Long Haul (Blu-ray) The Hitman’s Bodyguard