Posted in: Disc Reviews by Brent Lorentson on October 27th, 2017 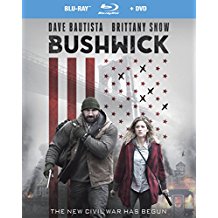 Ever since Birdman was released, it seems many filmmakers have been attempting to pull off the continuous take and outdo all the others.  It was impressive when we all saw it the first time, but since then everything just seems like a bad knockoff.  The newest film to follow this trend is Bushwick.  While the camera work in the film does allow for an immersive experience, honestly it felt like I was in a first-person shooter video game, which was cool, but it seemed like the camera work was a distraction from the story.  This is a frustrating film. On the technical side there is a lot to appreciate, but the moment you start looking at the story, the film seems to simply fall apart.

The film opens up with Lucy (Brittany Snow) coming home from college to visit her family.  What she comes home to is a city at war.  Immediately my question is this: in a time of people being so connected through their cell phones and various social media outlets, how is it Lucy seems to be unaware of what is going on?  We’re supposed to believe this battle just broke out, but so many of the people battling on the streets seem to be all too organized for this to have just occurred.  Why are the streets not packed with cars full of people trying to leave the city? For a while all we see are people shooting at anyone and everyone as Lucy does her best to avoid gunfire and try to reach her grandmother’s house.

Lucy eventually finds herself in a tough situation and is rescued by Stupe (Dave Bautista), a former Marine who wants to leave the city and find his family. This unlikely duo actually has some nice chemistry between them.  Really the film functions like a video game as we see the pair avoid being seen by shooters. They kill some bad guys all while they are trying to reach the next safe point.  As they move from various points, it’s like seeing the film level up and getting harder, meaning more shooters and more people they have to kill. Viewing this as a live-action video game, it’s easier to appreciate this as a fun action film, but it’s when the film decides to inject story into this action mess things just get silly.

Apparently Texas wants to separate from the US along with other states; to do so they are using force and wage an invasion on Brooklyn to begin this siege. The idea of filming a modern civil war is something I can get behind, but how this film unfolds just really doesn’t make much sense.  No time is really spent setting up this reality, and it really gets distracting.

What is impressive is that the film is ambitious and is not shot on a large budget. A lot of CGI effects are used to help convey this city in turmoil. There are plenty of digital fires and cut-and-paste smoke effects to attempt to create this war-torn city. There is only one point that was simply poorly done where a grenade apparently goes off to destroy a Hummer, but through the fake flames you can see there is no damage to the vehicle.  But looking past minor things, the film has some pretty cool action set pieces, and with a 94-minute runtime, the film is non-stop with the action.

Bushwick is presented in the aspect ratio 2.35:1.  The 1080p image is arrived at with an AVC MPEG-4 codec at an average of 26 mbps.  Personally the film is a little too clean for me.  When the film is outside everything just looks too crisp, but when the film moves indoors, it seems to get a more washed-out look.  It seems like the film attempted to shoot with a more natural look. At times the actors are back-lit from the windows, and everything else is darker, so some detail gets lost.

The DTS-HD MA 5.1 track is a really solid track.  The sound mix is great, as we are constantly hearing gunfire, sirens, screaming, and helicopters around us.  This is a track that really helps the viewer feel like they are in the middle of the chaos.  The score is subtle and again had me thinking of the old first-person shooters I used to play.

The Making of Bushwick: (7:43) Your basic behind-the-scenes interview with the cast and crew discussing their experience making the film.

This is a film that has me flip-flopping with my thoughts on it.  If you are just looking for a fun action film with a unique camera style, then this is something to check out.  Brittany Snow and Dave Bautista have some really good performances here despite the muddy storytelling.  Is the film perfect? No, but it is fun.

Brent Lorentson is a horror writer and film critic based out of Tampa, Florida. With a BA in Digital Film, he co-wrote and co-directed Scavenger Hunt. His short stories have appeared in various horror anthologies. In 2019 his short script Fertile Blood will be a part of the anthology horror film Slumber Party. He is currently working on his first novel A Dark and Secret Place set to be released in late 2019. Favorite Films: Taxi Driver, Fight Club, I Saw the Devil, The Wild Bunch, Dawn of the Dead, A Clockwork Orange, Pulp Fiction, Heathers, The Monster Squad, and High Fidelity.
“31 Nights Of Terror” Contest: Win 101 Horror Movies: You Must See Before You Die “31 Nights of Terror” Oxenfree (Xbox One)