Into the Night (Blu-Ray)

Posted in: Disc Reviews by Michael Durr on November 6th, 2017 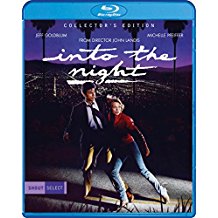 One thing that you can probably surmise about me fairly quickly is that I am a product of the 80’s. I still wear Converse shoes when I’m not working. I watch a regular dose of Transformers (first generation, 1984) and my favorite movie is Escape from New York (1981). My wife was even born in the eighties. Probably not the same thing, huh? Anyway, I usually jump at the chance to review an 80’s movie and today is no different. The movie is called Into the Night with Jeff Goldblum and Michelle Pfeiffer from 1985. Never heard of it? Surprisingly, me neither. Let’s take a look.

A plane touches down on a dark night at LAX, the Los Angeles Airport. A little bluesy up-tempo number by B.B. King fills the speakers. We take a look at a Shell gas station and the local doughnut shop. It’s just another night, cars are being towed and Ed Okin (played by Jeff Goldblum) is wide awake laying in bed.

The next morning, his wife Ellen (played by Stacey Pickren)tries to talk with Ed about his lack of sleep. The conversation unfortunately goes nowhere and ends with Ellen taking his breakfast away. She has to go to work, and well so does Ed. Ed and his buddy, Herb (played by Dan Aykroyd) work as aerospace engineers where Ed’s insomnia is having an increasingly negative affect on his work.

Herb suggests to Ed that he should go to LAX and board a plane to Vegas. For now, Ed decides to needs to go home and get some sleep, or at least attempt to. Once he gets to his house, he sees a strange car. He goes up to the bedroom window of his house, and unfortunately discovers that his wife is having sex with another man.

That night, Ed understandably cannot sleep. He decides to take a moonlight drive, right to the airport. Meanwhile, Diana (played by Michelle Pfeiffer) and her friend, Hasi (played by Ali Madani) are attacked by four Iranian men (played by Michael Zand, Hadi Sadjadi, Beruce Gramian and director, John Landis). Hasi is killed and Diana manages to run away. As Diana jumps over a guardrail to get away from her attackers, she lands right onto Ed’s car. So the real story begins.

We soon learn that Diana is not the innocent girl that she was portrayed as early on. The movie becomes one misadventure after another as Ed increasingly has a hard time trying to stay awake and one step ahead of not only the Iranians but also other factions who want what Diana has in her possession. Jeff Goldblum and Michelle Pfeiffer do a fantastic job with their characters. They hold up the picture while the rest of the cast is essentially an assortment of odd b-stars and director cameos from the era.

Director cameos? Well we already know about John Landis who plays one of the Iranians. Would you believe that Jim Henson, Amy Heckerling (Fast Times at Ridgemont High), and Richard Franklin (director of Road Games, one of my favorite movies) all have cameos in this film. Among many other directors too. We also get a supporting cast of David Bowie, Bruce McGill, and the guy who did Body by Jake, Jake Steinfeld as well, a bodyguard.

The movie is such a time capsule of its era too. We have a plot that involves multiple foreign nationalities as bumbling villains. We have random nudity (including some of Michelle Pfeiffer), and then we have the obligatory Elvis impersonator. This leads into my only negative of the film and that is its identity crisis. Sometimes it is a comedy, sometimes it really tries to be serious and dramatic.

While thankfully, it never was a horror movie (except for that wig on Sue Bowser’s head), it certainly did not know what it wanted to be. It is a film that while it did okay at the box office, its two stars (and bevy of director cameos) has made it age like fine wine over the years.

This film arrives in its native 1.85:1 original aspect ratio. The print was obviously remastered and by the looks of it, they did a fine job with it. This movies lives in the night as indicated by the title but I never felt as if any scene was too dark or missing a substantial amount of detail. Without a doubt, this is the finest that the movie is ever going to look within reasonable expectations.

Now on the negative side, there is some noise and an occasional scene or two where things get a little dingy, aka some black crush. But it’s a dated film by now and I would venture to say that it should look so. I mean, I would want Michelle Pfeiffer to be clear as a bell in her bathroom scene. But it would make little sense to have a crystal clear picture with Jeff Goldblum and Michelle riding around in a giant Elvis car trying to get away from a bunch of Iranians through the 80’s LA landscape.

Audio arrives in English DTS HD 2.0 Master Dual Mono. B.B. King’s soundtrack sounds excellent and impressive. The jazzy, bluesy little numbers fit perfectly with the film and are replicated nicely here. The sounds are not going to be amazing considering the mono quality but the track from what I can tell was free of hiss.

Dialog is also well done as I tend to watch these films with guns a blazing during the day and then late at night with the volume at a modest level. I never felt the need to turn it up and everything was perfectly decipherable even from the non-American accent crew. Subtitles is provided in English SDH and it was spot on and non-distracting.

John Landis – Back Into the Night (25:47) : This is one of two brand new features on this disc. This interview is excellent and John goes deep into casting choices, musical scores, and direction. It would have been nice to get a commentary but this is an excellent look into the movie.

Jeff Goldblum – Requiem for an Insomniac (22:31): The highlight of the disc, this also new interview has Jeff being the always interesting Mr. Goldblum. He talks about his co-stars and even the impact his character had on 80’s America. I actually read on another forum that the Interviewer said this was one of his favorite interviews ever and it is easy to see why.

Award Winning Documentary – B.B. King Into the Night (26:05): When the first scene has B.B. King on lead with Jeff Goldblum, Michelle Pfeiffer, Dan Aykroyd, Steve Martin, and Eddie Murphy playing the “backup band”, you know this is going to be something special. I never saw this on the dvds, but it’s a nice companion piece with lots of interviews and musical performances. B.B. was an amazing musical legend and it shows through in the nearly 30 minutes of material.

Original Theatrical Trailer (1:39): The old, dirty trailer from yesteryear. Appreciated for archival purposes, but it is a good example of how the film used to look and why the finished restoration was an excellent job.

This film did not do very well at the box office. To be honest, according to records it did not even break the Top 100 for that year. When looking at other films that did better in the box office that year, movies like King Solomon’s Mines, Enemy Mine, or Once Bitten pop up. But I dare say, Into the Night has aged ten times better than any of those films and warrants repeat viewing. I mean, do you really want to watch Jim Carrey run around in a vampire movie ever again?

Michelle Pfeiffer and Jeff Goldblum easily show why they would become megastars in future movies by polishing their chops here. The supporting cast of directors and interesting co-stars all help to bring depth to the film. The video and audio are well done and the extras are really only missing involvement from Ms. Pfeiffer. Otherwise, it would have been perfect. This is an easy disc to recommend and for any 80’s film fan it should be one to own. Enjoy.

Michael Durr has been reviewing movies for the better part of fifteen years now. He primarily enjoys thrillers, sci-fi, animation and even a little courtroom drama. His favorite films include Escape from New York, the Goonies and anything with Alyssa Milano. When he’s not praising Kurt Russell as the greatest actor of our time or scratching his head over a David Lynch flick, he’s spending time at home in Texas with his lovely wife, Lori and his amazing son. How they put up with him is a mystery, but even Basil Rathbone doesn’t have the time to solve that one.
Thor : Ragnarok Tuesday Round Up: November 7, 2017