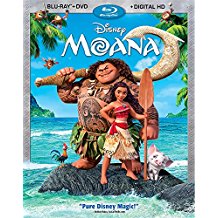 – “If you wear a dress and you have an animal sidekick, you’re a princess.”

Disney Animation’s 1990s renaissance was followed by an early 21st century lull for its non-Pixar offerings. The princess-centric formula was played out, so Disney pivoted and started doing things like giving Rapunzel and Eugene Flynn Rider equal billing in 2010’s Tangled and making Frozen (which would’ve definitely been called “The Snow Queen” in the ’90s) a story about sisterly love as opposed to happily ever after. One of the things I love about the outstanding Moana is that it offers a refreshing, thoughtful and exhilarating new approach to the classical Disney princess formula.

The story is set in Ancient Polynesia, and a quick prologue introduces us to shape-shifting demigod Maui (voice of Dwayne Johnson), who steals the mystical heart of island goddess Te Fiti for reasons that aren’t immediately clear. Unfortunately for Maui, he is attacked by Te Ka — a demon of earth and fire — as he tries to make his escape. As a result, both the heart of the island and Maui’s magical fish hook are lost in the ocean.

“There’s more beyond the reef.”

Flash forward about 1,000 years and we meet Moana (newcomer Auli’i Cravalho), who is presented with the mystical heart of the island at a very young age by the ocean. Moana is one day destined to become the next great chief of her tribe, but she has so far led a sheltered life thanks to her risk-averse father (Temuera Morrison). When her tribe starts to run out of fresh fish and other resources, Moana suggests venturing beyond the reef, which her father vehemently opposes. With support from her open-minded Gramma Tala (Rachel House), Moana embarks on an adventure that involves finding Maui (and his handy fish hook) and enlisting the demigod’s help to return the heart of the island to Te Fiti.

Following its high-flying prologue, Moana gets off to a bit of a sluggish start as it establishes its familiar spunky girl/overbearing and overprotective father template. Things start to get interesting as the story delves into the idea of tradition; specifically, how people can spend so much time honoring the past they lose sight of the present and the trail-blazing spirit that left a mark in the first place.

The film itself is an interesting blend of new and old. The directors are John Musker and Ron Clements, who have worked together for 39 years and whose films include classics like The Little Mermaid and Aladdin. Moana represents the duo’s first foray into 3D computer generated animation and (with the full might of Disney Animation behind them) it’s a jaw-dropping spectacle. In addition to the stunningly realistic water and backdrops, there’s great imagination at play here. The standouts include vicious little coconut pirates (you heard me), Maui’s disapproving and animated tattoos (which allows Musker and Clements to sneak in some 2D animation in this cutting-edge production), and a bird-brained chicken voiced by Alan Tudyk (that Juilliard education is really paying off).

The story becomes especially nimble once Moana meets Maui and the duo embarks on parallel coming of age/redemption journeys, which prevents Moana from becoming just another “princess movie.” Cravalho is a spunky, self-assured find as the title character; not only does her vocal performance convincingly carry the action, but her musical chops are impressive. (Moana has several memorable songs, but Cravalho belts out the signature tune “How Far I’ll Go.”) Meanwhile, Johnson (continuing his quest to appear in every other movie that is released between now and the end of time) is hysterical and perfectly cast as the pompous fallen hero Maui. The actor’s likability and megawatt charimsa keeps us laughing with and rooting for the character even before Maui stops acting like a jerk.

When I stop to think about it, pretty much everything in Moana plays out precisely as I expected since I’ve been watching Disney movies my entire life. However, the movie still manages to feel fresh and original by forgoing fairy tales and diving deep into a culture where the ocean is a sentient character that connects people instead of separating them. Now, *that* is Disney magic.

Moana is presented in an aspect ratio of 2.40:1. The 1080p image is arrived at with an AVC MPEG-4 codec at an average of 25 mbps.The palette is dominated by lush greens and resplendent blues, but really every single color is a standout here. (I mean, even a trip to the scary-sounding Realm of Monsters is a multi-colored and shiny feast for the eyes.) Fine detail here is extraordinary; when you’re not staring at the amazing, photorealistic backgrounds, you can appreciate the painstaking work that went into animating every strand of hair and every line of Maui’s tattoos, which also show off some inky black levels. I could go on and on, but I’ll just leave it at this: this Disney Blu-ray presentation is a reference quality stunner.

The DTS-HD Master Audio 7.1 track is every bit the equal of the outstanding visual presentation. While Moana is very obviously a feast for the eyes, the excellence of this HD track may not be quite as apparent. It starts with a low, effective rumble from the subs as the score swells at the start and leads into the prologue. The rest of the songs/compositions are given similar weight and dimension throughout the movie. In non-music nerd news, the track also offers a dynamic, precise and exciting experience once Moana embarks on her adventure with Maui. The crash of waves is perpetually in the background while never intruding on the main action. The confrontations with Te Ka are appropriately intense and feature room-shaking clashes of sound. In other words, everything single aspect of this sonic presentation is flawless.

Theatrical Short Film — Inner Workings: (6:26) Anyone who watched Moana in theaters is familiar with this wonderful short, which hilariously and poignantly deals with the struggle between the heart and head. Includes a brief introduction with producer Sean Lurie and director Leo Matsuda, who said he was inspired by his own dueling Japanese and Brazilian heritage.

Maui Mini-Movie — Gone Fishing: (2:29) A slapstick short featuring a hungry Maui trying to use his magical fishhook to snare a snack. Cute, but totally skippable.

Voice of the Islands: (31:13) Directors John Musker and Ron Clements talk about pitching this project to Disney animation honcho John Lasseter and their initial three-week trip to the Pacific Islands for inspiration. That turned out to be the first of many jaunts to that part of the world by the crew, and we see fantastic footage of how the culture from that part of the world informed every aspect of the filmmaking process (story, animation, music, and more).

Things You Didn’t Know About…: (4:00) Split into two chapters — Ron, John Auli’i & Dwayne + Mark, Opetaia, and Lin-Manuel — the key players behind Moana answer hard-hitting questions like “What did you have for breakfast this morning?” and “What’s your favorite Disney ride?” Features a Play All option.

Island Fashion: (5:13) Visual development artist/costume designer Neysa Bové talks about the challenge of creating attire and accessories for a story that is set thousands of years ago. (Not a lot of reference material available.) Pretty cool stuff here, including the story behind the creation of Moana’s necklace.

The Elements Of…: (14:14) Takes a close look at the process of animating Mini-Maui (the demigod’s 2D tattoo), Water (absolutely sparkling and ultra-realistic), Lava (in the form of Te Ka), and Hair (Maui and Moana both have flowing locks). Features a Play All option.

They Know the Way — Making the Music of Moana: (12:37) Examines the collaboration between composer/songwriter Mark Mancina (a Disney regular who worked on The Lion King) and songwriters Opetaia Foa’i (a superstar on the Pacific Islands) and Lin-Manuel Miranda (the certified genius behind Broadway’s “Hamilton”). They’re all basically Disney nerds who took this task very seriously, and their collaboration turned out to be extremely harmonious and organic. We also get some footage of the actors recording the movie’s tunes.

Deleted Song — “Warrior Face”: (3:41) Includes an introduction from Lin-Manuel Miranda (the vocals are provided by “Hamilton” co-stars Christopher Jackson and Phillipa Soo). This song was supposed to take place before Moana and Maui venture down into the Realm of Monsters, but I can see why it was cut to maintain the flow of the story.

Fishing for Easter Eggs: (2:52) Stars Cravalho and Johnson point out some of Moana‘s nods to other Disney movies. This is obviously cutesy, but also useful since I didn’t initially spot cameos featuring characters and items from The Little Mermaid, Aladdin, and Frozen.

Deleted Scenes: (25:56) There are seven total scenes presented in storyboard form and each featuring an intro from directors Musker and Clements. The most interesting ones involve sequences and ideas that were conceived very early on in the creation of the movie. (Initially, Moana had a bunch of brothers and was a skilled sailor.) Features a Play All option.

Audio Commentary with directors John Musker and Ron Clements: These two guys have been working together for almost 40 years, so it’s no surprise they have a great rapport. This commentary includes wonderful insight on both the technical aspects of the movie (the directors generously offer shout-outs to specific animators responsible for different elements of the film) and Moana‘s story (they discuss the inspiration and many iterations of the movie, which was first pitched in 2011.)

Disney released three major animated movies in 2016, and two of them (Zootopia and Finding Dory) grossed more than $1 billion worldwide. I liked Finding Dory, and I really liked Zootopia…but I think Moana might be my favorite from that trio and the one with the potential to have the longest-lasting appeal.

As if that weren’t enough, Disney has now released this great movie in a sparkling Blu-ray package that features a top-notch A/V presentation and a treasure trove of extras. I don’t know if you can tell, but I feel like you should check this movie out if you get the chance. I can already hear you thanking me for the recommendation, so I’ll just say, “You’re welcome.”