Posted in: Disc Reviews by Gino Sassani on February 22nd, 2018 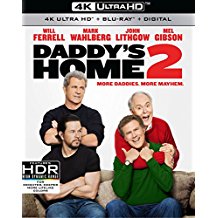 “Maybe we could use a dad’s night out.”

Let me begin this review by stating that I did not see the first Daddy’s Home film. There are pros and cons to that situation. I’m not really in a good position to judge the film’s value or quality as a sequel, and I wasn’t familiar with any of these characters when I started to watch the film. It does, however put me in a good place to evaluate this film on its own merits. Is it the kind of sequel that functions as a standalone film, or will you be lost from the start with no chance to catch up? I’m happy to say that I never felt like I was at a disadvantage. Yeah, there were moments where I felt like I wasn’t part of the inside joke, but those moments are actually quite rare. I was able to enjoy this one just fine. The relationships were a bit confusing when it came to which kid really belonged to which parents, and some of that I never completely sorted out. The performances allowed me to get at what kind of characters the leads were from the beginning. I might have been the new “in-law” invited to this family’s holidays for the first time, but that doesn’t mean I didn’t manage to have a lot of fun along the way.

In the time since the original film, it’s obvious that Brad (Ferrell) and Dusty (Wahlberg) have figured out how to make their co-fatherhood situation work. It’s obvious they have been trying, but it’s equally obvious that there’s still a lot of hidden aggression just beneath the surface that both have managed to keep under control. It starts to wear a little thin when they learn at a Christmas pageant that the kids don’t like the idea of having two Christmas celebrations. The obvious solution is to have one with all of them. Can they do that and still maintain the thin civility they have been showing? Who knows. They don’t get the chance when Brad and Dusty’s own fathers join them for the holidays.

Mel Gibson plays Kurt, Dusty’s long-absent father. He was a pilot for the space shuttle and believes in tough love. Meanwhile John Lithgow plays Don, Brad’s father, and he’s the complete opposite of Kurt. He is overflowing with emotions and very touchy-feely. Brad and Don are very close, too close for the people around them. Kurt decides he’s going to stir the pot and spends a lot of time attempting to cause friction between Bard and Dusty. He treats them all to a winter resort where the families spend Christmas in quarters that might be a little too close.

I like that the film relies on the character moments and conflict to drive the narrative. There’s so much of that that I never needed to know anything about them before this film. The story isn’t the plot. It’s the unique dynamic of these two fathers and their very opposite ideas of parenting. It’s all about the influence of these new characters and the new dynamic that makes Daddy’s Home 2 far more interesting than I expected it to be. There’s great chemistry among the four male leads here, and you’ll actually enjoy spending time with them. That’s a key for me. You don’t have to have a great movie. If I feel like I’d like hanging out with these characters, you’ve got me for the 90 minutes or so you need to have me. There are a lot of supporting characters here, but honestly they all get buried in the snow. The sheer force of the leads leaves little room for anyone else to make their marks. Thee rest end up as holiday decorations, but make no mistake where the main attraction is playing out.

This is a bit of a path of redemption for Mel Gibson, and I’m honestly glad to see it. He’s had a rough decade since his “rant heard ’round the world”. He was pretty much abandoned by the industry and ended up fighting his way back, mostly in a director’s chair. Hacksaw Ridge likely was the film that allowed him back into the fold, and his natural fit here will go a long way toward normalizing the visage of Mel Gibson in cinema again. He’s a nice addition here with a force-of-nature character who is able to hold his own with Ferrell and Wahlberg. John Lithgow doesn’t seem to have a chance, but he digs out a wonderful little niche for his character that adds a lot of heart to the rest of the puzzle. The four fit perfectly and are worth a little bit of your time, to be sure.

Daddy’s Home 2  is presented in an aspect ratio of 1.78:1. That’s a touch off from its original 1.85:1. The ultra-high-definition 2160p  image is arrived at by an HEVC codec with an average bitrate of 55 mbps. On first glance this doesn’t appear to be the kind of film you would rush out to own on UHD. It’s true that there aren’t the kind of visuals you would associate with this kind of an upgrade. But as 4K becomes the new normal, this film demonstrates how even a neutral and normal film can benefit from the bump. Colors are the obvious answer here. You get to see the vivid reds and greens of the holiday here, and they do jump out at you. There’s a lot of snow here, and I don’t think we talk enough about HDR and its impact not only on color but extremes of white and black. There’s a ton of that on screen to appreciate here. Black levels are still sweet with plenty of shadow definition even if it isn’t necessarily called for a lot here. You will also find a nice increase in textures, most notably costumes in this film. Lots of jackets and sweaters add a ton of realism when you can almost feel the fabrics. This is the kind of presentation that really pops when you view it side by side with a Blu-ray that looks nice, but can’t come close to the sharpness, detail, and colors of the UHD.

The Dolby Atmos presentation defaults to a comfortable 7.1 track. This isn’t going to be an aggressive mix, and you might dismiss the 7.1 track as unnecessary. You’d be correct up to a point. It’s the subtle surrounds that sell this audio presentation. Carol singing gets a nudge in fullness and depth, as does the dialog. That’s because subs keep a well-defined bottom going without ever shaking the room. It’s not the rumble here but the reinforced body that makes this as immersive as it is.

Making A Sequel: (4:50) Cast and crew provide the usual sound bites with plenty of footage from the original film. Behind-the-scenes footage is mostly there to demonstrate how much fun they all had making the film.

Look Who’s Back: (7:16) this time we hear from the returning cast and crew, and again it’s very much about how much fun they all had.

Co-Dads – Will And Mark: (6:36) This feature focuses on the two leads both on and off the screen.

The New Dads In Town: (7:11) This one focuses on Lithgow and Gibson and what they brought to the mix.

Captain Sully: (2:17) Take a look at the Sully cameo. This is very much a spoiler if you haven’t seen the film.

We had something of a gender war going this last Christmas. There were holiday movies from the Bad Moms and also these Daddies film, representing the dads. I would place my money on the dads. Bad Mom’s Christmas was a raunchy party from beginning to end with plenty of things that usually end up on Santa’s very naughty list. Daddy’s Home 2 keeps things a bit more family-friendly. There are a few crude jokes littered along the way, but this is very much a comedy of the old slapstick variety. Both films were sequels of movies not originally of the holiday making. Both decided on Christmas sequels, but they ended up on two very different tracks. If you have a family, this is the one to check out. I’m making a resolution for next Christmas, however: “No more hooker jokes.”

Gino Sassani is a member of the Southeastern Film Critic's Association (SEFCA). He is a film and television critic based in Tampa, Florida. He's also the Senior Editor here at Upcomingdiscs. Gino started reviewing films in the early 1990's as a segment of his local television show Focus. He's an award-winning recording artist for Omega Records. Gino is currently working on his 8th album Merchants & Mercenaries. Gino took over Upcomingdiscs Dec 1, 2008. He works out of a home theater he calls The Reel World. Favorite films: The Godfather, The Godfather Part II, The Body Snatcher (Val Lewton film with Karloff and Lugosi, not the pod people film), Unforgiven, Gladiator, The Lion King, Jaws, Son Of Frankenstein, The Good, The Bad And The Ugly, and Monsters, Inc.
Macon County Line Walking Out (Blu-ray)