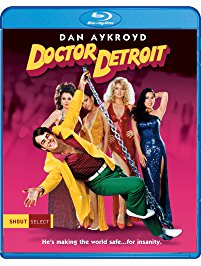 As I was working on this review, I came across a term that might just turn out to be a new pet-peeve. I am referring to the term or phrase, “Dated”. This term is often used with movies that could have only existed and made in that time period. It gets used even more when it involves a comedy, especially one with jokes or concepts that could only occur in a certain decade. What’s worse is that it is almost never used in a positive light, it solely exists to be negative and demeaning. Well, perhaps I can slowly change the connotation of that reference as I explore Doctor Detroit on Blu-Ray. Is it dated? Perhaps, but unlike other dated comedies of the 80’s, it is wonderfully so.

A little Devo hits our speakers, hey it’s the theme from Doctor Detroit. Except we are in Chicago. Professor Clifford Skridlow (played by Dan Aykroyd) is power walking down the street through everything in his path. It doesn’t matter if it is a kissing couple, children playing or even speeding cars. He stops (and power walks in place) next to a swanky car driven by Diavolo (played by T.K. Carter). In the back is Smooth Walker (played by Howard Hesseman) and his four ladies of the night.

The group of women as well as their handler become infatuated with him and poke some fun at his expense. But as soon as the crosswalk flashes to “Walk”, well Clifford is off and running…errr power walking. Diavolo drops off Jasmine (played by Lydia Lei) and then Karen (played by Fran Drescher) and presumably the other two girls, Monica (played by Donna Dixon) and Thelma (played by Lynn Whitfield). However, Diavolo and Smooth soon find themselves in a precarious position when they are cornered by some henchmen.

As it turns out, the goons are the property of Mom (played by Kate Murtagh). It would also appear that Smooth owes Mom eighty thousand dollars. In a pinch, Smooth decides to tell a lame brain story about how Doctor Detroit has now taken over the territory and Smooth can’t afford to pay her because of this. Mom is furious and demands that Smooth arrange a meeting between her and this Doctor of Detroit. It looks like Smooth and Diavolo are going to need to find a patsy.

Meanwhile, Clifford has stopped by his favorite Indian restaurant for some grub. He is considering his food choices when we realize that over at another table is Smooth, his four ladies and Diavolo. Smooth soon realizes that this is the same guy who was power walking next to them just this morning. *Ding Ding* We have a patsy in our sights.

The group immediately invites him over and buy him dinner. Clifford is certainly enticed by the four gorgeous women and a chance to spend what should be an interesting night. However, once all seven of them get into the car, and Superfreak by Rick James comes blaring through the speakers, we realize this is hardly going to be an innocent night. Poor, poor Clifford.

So, if you haven’t figured it out Clifford Skridlow becomes the one and only Doctor Detroit after Smooth skips town. The movie is particularly well cast with the four girls actually having some acting chops and not pure eye candy. Other small roles like Clifford’s mom and dad (played by George Furth and Nan Martin) also brought up some great comedic moments. I honestly can’t think of a single character that really brings down the picture. It’s a wonderful period piece that entertains even though the costumes, music, and plot is right out of the decade that it was made in.

Aykroyd does some fantastic characters in this movie (particularly the Southern lawyer) and really holds down the fort. I’ve seen a lot of arguments that suggest we should have seen more of Doctor Detroit. In reality, it was a difficult transition for Skridlow to transfer into the Doctor (and it was only a 90 minute movie) so the several times he was the Doctor felt more special rather than him flip flopping in and out of the character. I do wish we could have seen more of Smooth Walker though.

I do believe that this movie won’t play so well on people of future generations, at least ones who are looking for toilet humor and poop jokes. This is actual comedy, and while the movie takes a bit to get going, it delivers the story we are looking for by the closing credits. It’s likable, has a lot of lunatic like moments, and a girl gets the guy type ending.

The film is shown in a 1.85:1 Widescreen picture. I have a copy of the old DVD and its a rough sell with lots of blur and details are pretty hard to find. But somehow, Shout has done a fantastic job here with turning this movie into a wonderful presentation. The movie is nowhere near as dark as it used to be (even the nighttime scenes), and detail is more present and I found many things I hadn’t noticed before (and I probably had seen the movie 3 or so times). Grain is right where it should be and everybody looks vibrant and full of life. Spot on job for their select line.

English audio is provided in DTS-HD Master Audio 2.0 Mono. Since Doctor Detroit was a comedy, I was not expecting much here and it pretty much followed that way. The source was probably in bad shape but they did what they could. Dialog is clear but there are occasional “I’m glad I have subtitles because I didn’t understand some of that” moments. Subtitles are provided in English SDH (I think the original DVD release had them in French too which was dropped from this release).

New Audio Commentary with Director Michael Pressman & Pop Culture Historian Russell Dyball : Michael & Russell for the most part create an interesting commentary. They discuss a variety of subjects including legality over the name Harold Robbins (and how it almost got them into a lot of trouble), how they were overshadowed by such films like Trading Places, and even thrown in some similarities with the recent movie: Mother!. There is a little bit of dead space from time to time but it’s a worthwhile listen.

New Interview with Director Michael Pressman 24:35 : I think I might have enjoyed this a little bit more than the commentary. The main reason is that Mr. Pressman seems more comfortable here and it makes for a better time. He describes how the original story of Doctor Detroit was very different from the screenplay and eventual movie. This picture also had the unenviable distinction of John Belushi dying 6 months before shooting started which had impact on Dan Aykroyd. But Dan being the professional he was rarely led it show. In addition to various other subjects, he also throws in some knowledge about two of his other pictures Boulevard Nights and Some Kind of Hero. Both of which I’ll have to check out in the near future.

Radio Free Detroit – Inside the Doctor Detroit Audio Press Kit 24:29 : A very interesting extra for those who appreciate classic radio and how they were given material by the movie studios. Basically this was audio (some with a host and some open ended) that could then be pieced together into audio spots or even reassembled into “Exclusive” interviews if the station desired. Naturally, you are going to get stuff from Dan and others like Howard Hessman or Donna Dixon. But there are also nuggets in here from Steven Spielberg, John Belushi, and Steve Martin. I would like to see this for more movies, another worthwhile listen.

Theatrical Trailers 3:49 : Two trailers here. The first trailer is certainly the better of the two as Dan Aykroyd does caricatures of Dr. No and Dr. Zhivago before the trailer plays. The second trailer is more of a straight forward approach.

TV Spots 1:01 : Two spots here as well, the footage has not been kept very well, this mostly satisfies a curiosity and nothing more.

Radio Spots 4:14 : Six spots are provided, interesting if you have read any into how radio used to advertise movies when they actually had to sell them.

Photo Gallery 8:18 : A ton of pictures (a couple hundred I’m thinking) that show the cast and crew at various moments.

Note: The Cover-art is reversible. While the front image is reminiscent of the original poster art (and dvd release), some might prefer the different art on the reverse.

Doctor Detroit did not do very well at the box office. It barely made its budget back and didn’t really find a home until VHS and eventually DVD. Therefore, the whole joke about the Wrath of Mom (the sequel) never got a chance to play out. It’s unfortunate, this was Aykroyd’s heyday and this was one of his best pictures where he actually got a chance to show off his talent. But years later, we can appreciate what he and the film were trying to accomplish.

This Shout Select disc does a great job of providing wonderful video, reasonable enough audio and a slew of extras which were very recently recorded. I in particular would like to look more into Pressman’s earlier films, so the disc certainly succeeds on that level. So, I give this a very solid recommendation especially to those who can appreciate pure comedy even if it is of a decade or two (or three) past. Now go out there and pick up this blu-ray or else “I warn you, I’m a chiropractor! I will use my skills negatively!”. Enjoy.

Michael Durr has been reviewing movies for the better part of fifteen years now. He primarily enjoys thrillers, sci-fi, animation and even a little courtroom drama. His favorite films include Escape from New York, the Goonies and anything with Alyssa Milano. When he’s not praising Kurt Russell as the greatest actor of our time or scratching his head over a David Lynch flick, he’s spending time at home in Texas with his lovely wife, Lori and his amazing son. How they put up with him is a mystery, but even Basil Rathbone doesn’t have the time to solve that one.
Super Troopers 2 Tuesday Round Up: April 24, 2018