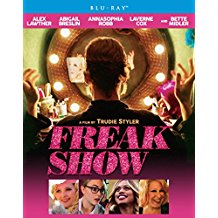 “The nail that sticks out gets hammered down.”

Freak Show centers on a flamboyant, fish-out-of-water teen who doesn’t fit in among his fellow high schoolers. The movie — a promising directorial debut from Trudie Styler, aka the wife of legendary musician Sting — works best when it finally lands on the notion that practically every teenager feels like a “freak” at one point or another. It’s a good, worthwhile message; the problem is other aspects of this film are about as subtle as Billy’s wardrobe and makeup choices.

Billy Bloom (Alex Lawther) is a gender-bending teen with extravagant fashion sense instilled in him by his impossibly glam mother, Muv (Bette Midler). Unfortunately, Billy is taken out of his comfort zone when he is suddenly sent to live with his strait-laced father (Larry Pine) and enrolls in a conservative Southern high school.

“Sometimes you’ve just got to dress a bitch down.”

Upon sashaying into his new school, Billy instantly becomes a target for bullying that is both physical (he’s beaten so badly, he winds up in a 5-day coma) and emotional (led by resident queen bee Lynette, played by Little Miss Sunshine herself Abigail Breslin). Billy does find a pair of allies in nice guy football player Flip (Ian Nelson) and chatterbox Blah Blah Blah (AnnaSophia Robb), whose name he doesn’t quite catch the first time they meet and connect. As the story progresses, Billy struggles to gain acceptance from his father and friends…especially after he decides to challenge Lynette for the title of homecoming queen!

Freak Show is based on the 2007 novel by James St. James, the famous “club kid” from NYC’s party scene in the late ‘80s and early ‘90s. Even though 11 years isn’t that long ago in the grand scheme of things, the level of acceptance for LGBT youth has grown significantly since St. James’ novel was published in 2007. (Naturally, there’s still a looooooong way to go, but that’s another story for another day.)

The result is that some key elements in this new adaptation — particularly the depiction of Billy’s tormentors — feel overly cartoonish and overly dated, even though Lynette literally says the words, “Let’s Make America Great Again” at the end of one of her speeches. This isn’t annoying because I feel that close-minded bigots need to be sympathetic on screen; it’s annoying because Billy and his allies are presented as dynamic, imperfect, multi-dimensional characters and it would’ve made for a more effective film to see even a fraction of that consideration extended to Lynette. (The book was adapted for the screen by Patrick J. Clifton and Beth Rigazio.)

Otherwise, Freak Show moves along with plenty of style and flair to spare. It actually moves along a little too swiftly for my taste both early on (Billy is inexplicably plopped into his father’s life by the end of the opening credits) and towards the end (Billy doesn’t even announce his homecoming queen candidacy until the movie’s third act). The script does have a neat reveal related to the fact that Billy is almost definitely an unreliable narrator when it comes to his relationship with his parents. There’s also some perceptive recognition of the “shadow people” in high school: everyday students who don’t fit into a specific type and are content to blend into the background.

Although Styler’s celebrity status gave her access to an uncommonly starry cast for a first-time director, the movie is ably carried by Lawther, who has previously delivered impressive work on Netflix’s Black Mirror (“Shut Up and Dance”) and The End of the F—ing World. In addition to rocking Billy’s frocks, the actor ably conveys the heartache beneath his tense interactions with his father and unrequited attraction to Flip. Midler’s force-of-nature personality serves her extremely well for her handful of scenes, and I really enjoyed Celia Weston’s stern, sturdy work as the housekeeper in Billy’s dad’s mansion. Also, John McEnroe, of all people, turns up to play (wait for it) a hot-headed coach. Meanwhile, Breslin never had a shot at making Lynette anything other than a one-dimensional monster.

That being said, Freak Show still manages to deliver a surprisingly affecting and effective ending in which Billy and his allies take back and repurpose the word “freak” as something that ought to be celebrated.

Freak Show is presented in an aspect ratio of 2:40:1. The 1080p image is arrived at with an AVC MPEG-4 codec at an average of 31 mbps. In addition to recruiting a solid cast for her feature film debut, director Trudy Styler was able to enlist Oscar-winning costume designer Colleen Atwood to help bring Billy Bloom’s more glamorous and outrageous fashion choices to life. Billy’s frocks, bangles and beads provide the bursts of color and shine in this presentation while also allowing the disc to show some impressive fine detail. Although the movie is set in “the South,” the palette for most of the film is surprisingly overcast and a little stark. (By comparison, the flashbacks to Billy’s idyllic bonding sessions with Muv have a warm, soft glow to them.)

The DTS-HD Master Audio 5.1 track only really comes to propulsive, percussive life whenever songs like “Electric Love” by Borns support the action on screen. This is a dialogue-driven track that only occasionally uses the rear speakers to immerse you in the action. (Sound separation is subtle to the point of feeling minimal.) The thing is, that’s totally fine: this is a clean, well-balanced presentation — Billy’s voiceover consistently comes through loud and clear — that does its job.

Freak Show has some pacing issues and (understandably) stacks the deck in favor of its flamboyant hero, but it’s otherwise an entertaining, colorful ode to outsiders. It’s too bad this release doesn’t have any substantial bonus material; it’s a missed opportunity to bolster and build upon the movie’s message.