A Wrinkle in Time (Blu-ray) 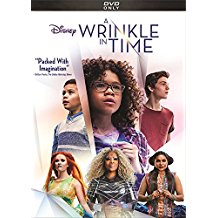 “We can’t take any credit for our talents. It’s how we use them that counts.”

Much has been made about the fact that Ava DuVernay’s A Wrinkle in Time is the most expensive movie ever directed by a woman of color, carrying a reported $103-million price tag. The good news is the filmmaker has absolutely infused her own personality and perspective into this live-action Disney spectacle (no small feat, by the way). The bad news is that DuVernay has taken those considerable resources and made a wildly uneven movie that, at various points, somehow manages to look both way more expensive and way cheaper than its budget would suggest.

Meg Murry (Storm Reid) is the dour teenage daughter of a pair of married scientists (Chris Pine, Gugu Mbatha-Raw). The reason Meg is so cranky and a target of ridicule at her school is because her beloved astrophysicist dad went missing four years earlier. That also means Meg’s gifted, 5-year-old younger brother Charles Wallace (Deric McCabe) barely remembers their father. Mr. and Mrs. Murry were exploring the mysteries of the space/time continuum when Mr. Murry — who believed he was close to a major breakthrough — went missing.

“You just have to find the right frequency.”

The Murrys’ lives are rocked when they receive a visit from a colorful and peculiar visitor named Mrs. Whatsit (Reese Witherspoon), who informs them that Mr. Murry’s theories and discoveries — including a phenomenon known as a “tesseract” — were correct. Meg and Charles Wallace are joined by Calvin O’Keefe (Levi Miller), a crush-worthy classmate of Meg’s, as they encounter Mrs. Whatsit’s fellow astral travelers. There’s Mrs. Who (Mindy Kaling), who finds it difficult to verbalize in her own words and speaks only in quotes from other prominent figures. They also meet Mrs. Which (Oprah Winfrey), who can’t quite settle on an appropriately-sized physical form. The three Mrs. “tesser” the three children across the universe — Calvin is inexplicably on board for this adventure — by folding the fabric of time in space in order to reunite them with Mr. Murry and vanquish a rapidly encroaching force of darkness known as The It (voiced by Selma star David Oyelowo).

It was Selma that put DuVernay on the map in 2014. And even though A Wrinkle in Time — based on the classic 1962 sci-fi/fantasy novel of the same name by Madeleine L’Engle — appears to be literally worlds apart from DuVernay’s Martin Luther King, Jr. drama, there’s at least one notable similarity that works really well in this film. In both films, DuVernay favors slightly askew close-ups that lovingly linger on their subjects’ faces. For Selma, it framed MLK in a way that alternately made the iconic civil rights leader seem enormous and small. In A Wrinkle in Time, those same close-ups have the (unintended?) effect of blocking out all the surrounding noise and highlighting the more grounded drama and emotional truth in the story. (Although, to be fair, they also allow us to ogle the outrageous makeup work on the three Mrs.)

The rest of the Time, this movie is frankly a bit of a mess. DuVernay is the latest filmmaker to graduate directly from modest-budget drama/indie to nine-figure blockbuster. Sometimes it works out great, and other times you can really tell when a filmmaker doesn’t have complete mastery of visual effects on a grand scale. While DuVernay comes up with a few striking sequences — including an eerie, suburban cul-de-sac from hell on the planet Camazotz and a quietly powerful reunion towards the end — there are a few sequences that are flat-out embarrassing. I get the idea that otherworldly locales like Camazotz and the mountainous planet Uriel are supposed to look phony to some extent, but the tricks used to make Mrs. Whatsit levitate in the Murrys’ backyard and morph into a reject from Avatar during their interdimensional adventure were best left on the cutting room floor. (And the less said about a comically jumbo-sized Oprah wandering around in the background of early scenes, the better.)

Speaking of Oprah, the performances can’t really save A Wrinkle in Time. I’ve actually been really impressed with some of the mogul’s past performances. But the ways she’s utilized here — from Mrs. Which’s absurdly regal introduction to her inspirational platitudes — play into all the reasons people make fun of Oprah. Witherspoon is considerably more successful at injecting sass and personality into her performance, while Kaling — one of the more distinct comedic voices working today — is stuck parroting others’ words. I did enjoy the wealth of charisma Pine brought to his brief, early scenes as Meg’s rock-star-scientist dad; he made Mr. Murry someone worth missing. There are also extended cameos from the likes of Zach Galifianakis (sporting an unfortunate man bun and working too hard for meager laughs) and Michael Pena (as a sinister, colorfully-attired trickster).

The true gem, however, is Reid’s work as Meg. In a movie that is often ridiculous (both intentionally and unintentionally), the young actress feels genuine and relatable throughout. But even in giving us a new sort of aspirational heroine — the Murrys were not a multiracial family in L’Engle’s novel — DuVernay can’t help but go overboard. It’s not enough to have the handsome Calvin compliment Meg’s curly “black” hair once…the screenplay demands him to awkwardly reinforce the young girl’s natural beauty a second time.

A Wrinkle In Time is presented in its original aspect ratio of 2.39:1. The 1080p image is arrived at with an AVC MPEG-4 codec at an average 30-35 mbps. It’s the bright colors that dominate this high-definition image presentation. They seem to come from everywhere and everything. Colors are vibrant and pop off the screen here. While you’re not getting HDR quality here, it’s about as good as a high-definition image is going to get in the color department. There’s some nice detail, and various filters provide different atmosphere for the different planets. I’m not sure if it’s a plus, but Oprah’s wacky and crazy makeup pops off the screen. Black levels are superior with constant nice shadow definition.

The DTS-HD Master Audio 7.1 offers a lot to like from this audio presentation. There is crisp and clear sound separation that throws anything from voices to footsteps and a lot of odd things throughout the mix. It’s certainly a unique sound design and is quite immersive. The subs kick in just at the right moments to lift up the action. Dialog manages to cut through just fine. This is a rather splendid audio experience.

A Journey Through Time: (30:28) This is the making-of feature with plenty of behind-the-scenes footage. The entire first half is spent on cast and director, and it’s one of the biggest love-fest/mutual admiration pieces I’ve ever seen, and that’s saying something. Everyone was the best/most… anyone’s ever encountered on a set. The rest of the piece deals with production design, sets, locations and costumes.

Deleted Scenes: (9:36) There is an optional director’s commentary to be found on the four scenes. There’s also a play-all option.

There is also a very short blooper reel and two music videos.

It’s a microcosm for the general clumsiness on display in A Wrinkle in Time, which does have a worthwhile message about not letting darkness consume us buried under all the gossiping flowers and tesseract travel. I suspect A Wrinkle in Time will join John Carter and Tomorrowland as expensive live-action misfires for Disney. Then again, I also don’t want to live in a world where the studio only spends money on Star Wars, Marvel, and live-action versions of cartoons from 20 or more years ago. Even though A Wrinkle in Time winds up being a bumpy ride, I applaud the Mouse House for taking a big, audacious swing. “Why else would you come on this ridiculous journey with people you barely know?”