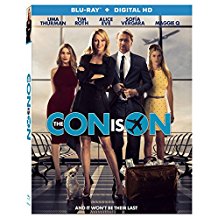 “The charm of this little escapade is rapidly wearing thin.”

Who doesn’t love a good heist comedy? The genre comes ready-made with stylish characters trading clever quips while trying to out-smart one another (and the audience). And with its surprisingly starry cast, The Con is On looked to be an especially promising entry into the heist comedy canon. So how did it go so wrong? Well for starters, the con artists here are just as (if not more) unlikable than the screwy suckers they are targeting.

Peter and Harriet “Harry” Fox (Tim Roth, Uma Thurman) are married British con artists who just pulled a big job for a gangster named Irina (Maggie Q). But instead of delivering the loot to Irina, the pair gets drunk and Harry gambles away an enormous chunk of the cash. As a result, the couple flees to Los Angeles and enlists the help of criminal confidante Sidney (Stephen Fry) to figure out a way to make money in order to pay back Irina.

“Once again, I’m being asked to prostitute myself for the sake of a criminal venture.”

When their initial plans stall out, Peter and Harry set their sights on Peter’s ex wife Jackie (Alice Eve), a vapid actress who re-married a psychotic movie director named Gabriel (Crispin Glover). Jackie owns a ring that is worth more than $5 million. But in order to get their hands on it, Peter and Harry will also have to dodge Gabriel’s overly-medicated assistant Gina (Parker Posey) and the director’s latest muse, a screechy, sex-starved actress named Vivien (Sofia Vergara).

Director James Haslam, who also co-wrote the screenplay with Alex Michaelides, sets the profane tone right off the bat: the movie’s very first line features a “nun” dropping an F-bomb. It’s an amusing moment, but it ends up being representative of what passes for wit in The Con is On. Don’t get me wrong…I can appreciate a well-placed curse word as much as way more than the next guy. The problem here — well, one of the problems, anyway — is that the humor feels as worn as Roth looks in this film.

Roth is just one of several cast members (Thurman, Posey, Glover) who gained indie cred and first came to prominence throughout the ‘80s and early ’90s; unfortunately, too many of the movie’s jokes feel like they’re 20 or 30 years old. That’s probably a slight exaggeration, but punchlines centered around juice cleanses, actresses with yappy dogs, and pervy priests feel like they’ve been done to death. It’s too bad because the movie could’ve worked as a savage satire of modern Hollywood culture.

It doesn’t help that the people throwing the darts here are no better than their targets. Beyond some semblance of street smarts — the couple finagles a fancy room by pretending a valet hit Peter with his car — Peter and Harry don’t really seem like particularly competent con artists. In addition to being addicted to gambling, Harry is apparently very bad at it, which is what gets the couple in their current predicament. Meanwhile, Peter’s aggressive, slovenly appearance practically screams, “I’m a scumbag…do not trust me!”

Roth overall looks bloated and completely uninterested in being here. At least Thurman looks smashing while adopting a not-too-convincing British accent to play Harry. The good news for Thurman is that her unconvincing accent pales in comparison to Maggie Q’s unconvincing Russian accent as Irina; the murder-happy character is more effective the less she talks. (I wish the movie had allowed the actresses to develop the sort of spark their characters were supposed to have.)

The Con is On is presented in an aspect ratio of 2.40:1. The 1080p image is arrived at with an AVC MPEG-4 codec at an average of 28 mbps. Except for the opening scene, the movie takes place almost entirely in Los Angeles…although you’d hardly know it from this drab, aggressively murky presentation. While the image is blemish-free, there’s very little that pops off the screen, which is disappointing given the stylish shenanigans on display. (This film also includes some uncommonly unconvincing green screen effects during driving scenes.) In fact, the most solidly consistent part of this presentation are the black levels for Peter’s black suit and Harry’s black dress, which serve as their unofficial uniforms. On the other hand, there are sequences that range from comically overexposed (a flashback between Harry and Irina in “Monte Carlo”) to flat out head-scratching (the movie’s climax is presented in a steely blue tint…for no apparent reason).

The DTS-HD Master Audio 5.1 track serves this dialogue-driven comedy well, though I do feel there were a few missed opportunities to engage the entire sound field. For example, hearing Peter’s voice start at the front speakers and echo through the rears would’ve been a nice touch during the moment where he is looking for Jackie in her cavernous mansion. The scattered gunshots offer brief pops, but they could’ve been even more impactful with stronger bottom end support from the subs. The movie’s persistent musical cues are the only parts of this track that take full advantage of each sonic element. That being said, this is a pretty well-balanced track…even when you’re watching the film at a moderate volume, Vergara’s sudden shrieking won’t puncture your ear drums.

I honestly have no idea how The Con is On — which was originally known as The Brits are Coming —was able to corral such an impressive cast. Then again, it doesn’t really seem like anybody was inspired to bring their A-games judging by the performances.

I really do appreciate the looser, crime comedy vibe this movie was going for. But in the end, this turns out to be a largely grating and charmless way to spend 95 minutes.