Joni Mitchell: Both Sides Now — Live at The Isle of Wight Festival 1970 (Blu-ray) 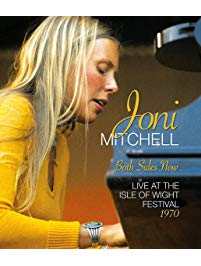 “It was the ‘hate the performer’ festival.”

With more than 600,000 people in attendance, the Isle of Wight Festival in 1970 became the largest musical event of its time. In terms of sheer numbers, it was even bigger than Woodstock a year earlier. But instead of celebrating peace and love, the hippies who attended Isle of Wight were put off by performers who showed up in ostentatious vehicles. They were determined to aggressively protest the commercialization of music, which led to fences being torn down and artists subsequently dropping out of the festival lineup. Joni Mitchell: Both Sides Now — Live at The Isle of Wight Festival 1970 documents how one of the quietest, most unassuming artists in the lineup made some everlasting noise.

“This festival business is becoming a psychedelic concentration camp where people are being exploited.”

This hybrid documentary/concert film was directed by the late Murray Lerner, who died last year shortly after completing this project. Lerner’s filmography includes several films chronicling artists’ sets at Isle of Wight 1970, including Leonard Cohen and Jethro Tull. I haven’t seen any of those other films, but I don’t imagine their stories have quite the same hook as Joni Mitchell’s experience at the festival.

“Give us some respect!”

Mitchell’s set was famously interrupted after she finished singing “Woodstock” by a hippie known as Yogi Joe, who wanted to speak on behalf of the festival crowd that had set up camp in an area known as Desolation Row. Yogi Joe was hauled off by Mitchell’s manager and a few other people, but it’s still striking to watch this footage today and realize how easy it was for someone to get that close to such a famous artist on stage. A visibly upset Mitchell attempted to start her next song (“My Old Man”) through scattered boos before finally stopping and chastising the crowd for their behavior, calling them a bunch of tourists and imploring them to respect the artists who worked hard to make it onto that stage. And the thing is…it actually worked! Mitchell’s mini-rant seemed to earn the crowd’s respect, leading to a more joyful set.

In addition to showing us Mitchell’s set, Both Sides Now: Live at The Isle of Wight Festival 1970 includes some fantastic footage of the rest of the festival. (I’m honestly blown away by both the quantity and quality of the footage captured at this festival.) We get more of Yogi Joe’s rant backstage after being dragged away, but there’s also comments from other protesters who felt they should be able to enjoy the festival’s music for free. Their stance is that any performer who charged people to listen to them express themselves artistically was a sell-out. The festival footage is interspersed with newer footage of Mitchell recalling her time at Isle of Wight, including arriving alongside Neil Young and having their manager arrested for marijuana posession. Mitchell also brushes off the protesters’ claims by stating, “Business is business. Shoes aren’t free…tobacco is not free. Why should music be free?”

Naturally, the star of this show is the set itself, which is presented in its entirety. The simple sight of Mitchell standing alone on stage — surrounded by huge amplifiers that belonged to The Who — and performing for a crowd that expanded as far as the eye can see is striking on its own. (In a newer interview, Mitchell insightfully compares the crowd to a dragon: if you can win over the first five rows — the dragon’s eyes — that approval will eventually extend all the way to the dragon’s tail.)

Mitchell’s set has a legitimate dramatic arc: even before she’s interrupted by Yogi Joe, the singer cut short her second guitar-driven song (“Chelsea Morning”) in order to move to the piano. And even though Yogi Joe doesn’t appear until after “Woodstock,” an audience member’s apparent bad acid trip at the start of the song caused a brief delay as she implored someone to get them medical attention. Although she won the crowd over with her firm plea to the crowd after Yogi Joe crashed the stage, Mitchell’s acoustic stylings were still a tough sell for such an enormous crowd (particularly when she busted out the dulcimer for “California”). However, the singer’s one-of-a-kind voice ultimately wins the day, and Mitchell actually gets comfortable enough to get playful and crack a smile at the end of “Big Yellow Taxi.”

1. That Song About the Midway

Joni Mitchell: Both Sides Now — Live at The Isle of Wight Festival 1970 is presented in an aspect ratio of 1.78:1 for the Both Sides Now documentary segments and a full screen 1.33:1 aspect ratio for the Isle of Wight concert footage. The 1080i image is arrived at with an AVC MPEG-4 codec at an average of 28 mbps. The majority of the film is comprised of footage from the 1970 festival, which was never going to look razor sharp by modern HD standards. However, I was still pleasantly surprised by the quality of these segments: what this vintage footage lacks in fine detail it makes up for in the sort of warm, earthy colors encapsulated by Mitchell’s sunny yellow dress. (The shots of the impossibly massive crowd are also impressive.) On the other hand, the newer interview segments of Mitchell commenting on the events of the festival were not quite as clean and sharp as I would’ve expected.

The DTS-HD Master Audio 5.1 track is suprisingly potent for what is not your typical concert film. Instead of a full band on stage rocking out across an entire surround sound field, we get Mitchell’s acoustic set in which the musical icon accompanies herself on guitar, piano, and dulcimer. The most impressive thing about this track is how crystal clear Mitchell’s legendary voice sounds; it honestly sounds like her vocals could’ve been recorded yesterday, rather than 48 years ago. While sub activity is pretty much nonexistent, we do get some very subtle rear speaker activity from the festival crowd. In fact, the most explosive moments in this track don’t come from the concert footage, they come from the bits chronicling the crowd’s various protests at the Isle of Wight. You also have the option of listening to the show in LPCM Stereo (which is the default track on this disc), but I recommend you switch over to the DTS-HD track.

There is no bonus material, although this release features a Concert Only option that allows you to view Mitchell’s Isle of Wight set uninterrupted.

This is definitely recommended if you’re a fan of Mitchell, since you get some very solid footage of her performing live plus commentary from the music legend herself. Heck, this is even recommended for people like me who aren’t Joni Mitchell obsessives, since it chronicles an interesting and significant bit of rock music history.