Posted in: Disc Reviews by Brent Lorentson on November 8th, 2018 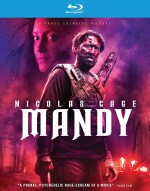 My first attempt at watching Mandy wasn’t a successful one. After fifteen minutes I was nodding off, so I stopped it and held off viewing it for another night.  This isn’t a movie you want to throw on too late at night. The first half is definitely a slow burn, but once this film picks up steam, you are in for one crazy, psychedelic, violent experience that will leave an impression on you.  It’s no surprise that Mandy has already developed a buzz through the internet and is well on its way to becoming a cult classic.  Is the hype for this film real?  Can Nicolas Cage still deliver a memorable performance as his career has seemed to have dissolved into constant direct-to-DVD content?  Well, the short answer to both these questions is yes, but this film is not for everyone, and to a degree I may be on the fence on the first half of this film.

Red (Nicolas Cage) is living the simple life in the woods as a logger and living with his girlfriend, Mandy (Andrea Riseborough).  Mandy is a bit of an artist and enjoys reading fantasy novels. One could assume her and Red’s fate could easily be the storyline of one of the books that she’s read; their story is the fodder of hellish nightmares.  Our time with Red and Mandy is spent showing us how well they work together as a couple, but it’s done so in a way that is filled with flat and monotone performances, with a drone-filled score that gently lulls the audience to the brink of sleep or boredom.  This all changes when we meet Jeremiah (Linus Roache) and his loyal cult.  It’s a strange obsession at first sight for Jeremiah when he sees Mandy for the first time and demands that she be brought to him, and everything that follows is simply another step further down this insane rabbit-hole that director Panos Cosmatos has orchestrated for us.

The film requires a bit of patience from the viewer, as many things are introduced to us in the first half of the film to not just build up the characters but also set the tone for this world Cosmatos is building.  It’s not just in the dialog, but in the visuals and also in the audio where he is creating a surreal, hellish world that I wouldn’t recommend taking any hallucinogens while viewing this.  I had heard so much about how great Cage was in this film, and as I was watching I was growing impatient, as the film seemed to trudge along, and really I just wasn’t seeing what was so great…Then we reach a moment in the film where we see Red helplessly watch what happens to Mandy, and the film and his performance shift gears.  It’s the revving up for this insane rage that builds in this performance that Cage lets loose, and it’s incredible.

The second half of this film is what people will remember the most, as we see Red go on a revenge kill-spree that has him facing demons and the members of Jeremiah’s cult.  Sure, you could say this is just a wacky-revenge film, but there is a lot more going on here, and Cosmatos has created something that has been attempted numerous times but has rarely been achieved by giving us a revenge tale with depth.  But for those who just want to watch a film and have a good time, Mandy still delivers the goods.  Not since the Jack Cardiff film, The Mercenaries aka Dark of the Sun have I seen a fight with chainsaws kick so much ass.  Seriously, a chainsaw battle — for this alone, the film is worth checking out.  But there is so much more bad-assery to indulge with this film, I don’t want to spoil it.

Despite how much fun this film ends up being, it’s the time it takes to get to the fun stuff that bothers me.  The film runs just a minute over two hours, and I feel this could have played better at 100 minutes, though I understand the tone of the film could have been impacted for doing so.  I understand why this film wouldn’t have played well for your typical filmgoer, but this is definitely a film that will find a loyal following over the years and I feel in many ways has put Cage back on track.  My biggest takeaway from this film is my appreciation of the world-builder that Panos Cosmatos is and the possibilities of what he could accomplish with a larger budget. This is definitely a filmmaker to keep an eye on and to get excited about.

Mandy is presented in the aspect ratio 2.40:1.  The 1080p image is arrived at with an AVC MPEG-4 codec at an average of 28 mbps.  If you want a film with crisp detail and a robust color palette, well, Mandy is anything but this. The film definitely is filled with style that reminded me a bit of David Lynch, but on an acid trip.  There are scenes that are overwhelmed by red filters, and then there are moments later where the lighting is done in a bright blue and a sickly green.  This process is all about setting a tone instead of giving us detail, especially when most of the film is shot at night or in dark settings.  I wanted the detail to be able to see the demons and some of the gore.  The black levels seem a bit skewed considering the image has a softer look to it, but again this was done for style purposes and had nothing to do with the transfer.

The DTS HD-Master Audio 5.1 track is just as trippy as its visual presentation.  The score by Johann Johannsson may as well be another character in the film for as much as it has on the influence of the tone and the overall experience of the film.  While I’m not a fan of using synth-drones and noises and calling it composing, it actually works in this film and does a great job at helping create this odd universe that Cosmatos is creating.  For some of the sequences where drug use has been involved, when we hear the dialog it seems to move from the front speakers to the rear in a trippy sort of way.

Behind the Scenes: (22:03) There is a lot of information that is given in this featurette that has a lot of behind-the-scenes footage and photos while interviews with several members of the production play over the footage.

Deleted and Extended Scenes: (13:58) There are five scenes altogether here, but the one I wish was put into the film is the first scene where we see Red have a confrontation at the local gas station.  Granted the film is already too long in my opinion, but this scene does a lot with setting up both Red and Mandy and gives us information we didn’t get in the film.

The film is a bit of a slow burn. Usually I like these kinds of films, but the start of this one really tested my patience.  If you stick it out, though, this is one of those films you’ll have a good time with.  If you like seeing Cage when he’s going over the top, then this will definitely be a must-watch for you.  Oh yeah, chainsaw fight, do I really need to say more than that?

Brent Lorentson is a horror writer and film critic based out of Tampa, Florida. With a BA in Digital Film, he co-wrote and co-directed Scavenger Hunt. His short stories have appeared in various horror anthologies. In 2019 his short script Fertile Blood will be a part of the anthology horror film Slumber Party. He is currently working on his first novel A Dark and Secret Place set to be released in late 2019. Favorite Films: Taxi Driver, Fight Club, I Saw the Devil, The Wild Bunch, Dawn of the Dead, A Clockwork Orange, Pulp Fiction, Heathers, The Monster Squad, and High Fidelity.
Nutcracker And The Four Realms Beyond The Sky (Blu-ray)