Posted in: Disc Reviews by Gino Sassani on November 12th, 2018 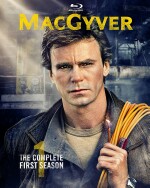 MacGyver (v) to act in an extremely resourceful manner. To utilize everyday items in unconventional ways to achieve a difficult task. I predict it will not be long before you can open your trusty copy of Webster’s and find this character has officially entered our lexicon. There is little doubt but that it is an unofficial part of it now. Crossing over from the realm of pop culture and into our language is a phenomenal achievement for a television show.

Richard Dean Anderson really is MacGyver. OK, maybe he’s not quite so handy with a paperclip and matchbook, but his own acting ability and charm make MacGyver more enjoyable than the formula that has become so renowned. They share the love of hockey. Anderson was slated to be a hockey star before injuring both legs. Both men hail from the wilds of Minnesota. The two also share an environmental crusade. These traits also coincidentally apply to Jack O’Neil.

The shows often opened with an unrelated story very much like the traditional James Bond films have. They are merely chances for us to see MacGyver use his inventiveness without being bogged down with all of the traps of an actual story. They were often written and even directed by other folks than that week’s episode. The James Bond link would go even farther in the first season. The show often used film footage for shots of action and foreign places. The chase scene from the original The Italian Job was an example, as were several scenes from a couple of James Bond films. The first season had MacGyver all over the country, often hooked up with one attractive woman who happened to find herself in the middle of things. There’s another James Bond connection for you.

Episodes could take you anywhere from retrieving fallen satellites in hostile territory to fighting a swarm of killing ants in the South American jungles. He’s had to stop high tech bombs from going off on a cruise ship facing a hurricane. He’s protected a witness against his own brother who happens to run a mob family. He challenges a small country dictator, and he rescues scientist trapped in an underground secret lab after an explosion knocks out their escape and threatens to send hundreds of gallons of acid into the local water supply. Times like these he’s usually working against a clock. And while we do not yet meet his friend and troublemaker Frank Dalton, played by Bruce McGill, we do meet his grandfather for the first time, played by John Anderson (no real relationship). Unfortunately, he accidentally brings a group of killers to the old man’s remote cabin in Colorado. It’s a relationship that will be touched on from time to time in the show’s seven years. We get to see where MacGyver got his knack for cleverness.

You also get to see some very young versions of stars who would later make a bit of a name for themselves. In Season One that includes Robert Englund and Jackie Earle Haley, both of whom would play Freddie Krueger in Nightmare On Elm Street films. Peter Jurasik would be best remembered as Sid, the Snitch on Hill Street Blues and Londo on Babylon 5.  Teri Hatcher went on to play Lois Lane on Lois & Clark: The Adventures Of Superman and also Susan on Desperate Housewives. Nana Visitor would play Major Kira on Star Trek: Deep Space Nine. The people behind the camera included Henry “The Fonz” Winkler and Lee David Zlotoff, who also gave us Remington Steele and Murphy’s Law. There wasn’t a lot of faith in the first season by some of the folks who worked on it. Take a closer look at the list of directors and you’ll see a common name, Alan Smithee. You’ll see the name appears twice, including the show’s pilot. It’s a fictitious name used by any director who wants to disavow his work on that project. If only they could have seen what was ahead for the series and its star.

The first season saw Mac’s job as more generic than it would be in later seasons when he would be employed by the enigmatic Phoenix Foundation. Dana Elcar would guest star in the pilot as a character but would show up in mid-season as his boss Pete Thornton. This would lead to yet another Stargate tie-in before the fact. Elcar’s body double on the series was played by a guy named Don S. Davis, who would end up playing his boss, Major Hammond, on Stargate SG-1.

CBS gives you all 22 episodes on five discs. This set doesn’t have the crappy cardboard sleeves that scratch your discs like the DVD complete series release had. It’s a sturdy plastic box that allows these discs plenty of protection for the years to come.

Each episode is presented in its original full-frame broadcast aspect ratio. There’s obvious damage to the masters, and it doesn’t always look great. But the new transfers are as good as it’s going to get here. The images are solid when you consider the source material. I suspect those prints will get better as the season progress. These are absolutely an upgrade from the DVD releases. This release will hold up much better for your collection.

The DTS 2.0 is pretty much what you got when you watched it on your television in the 80’s. But the presentations are clean. The dialog is what counts. Sure, I’d love to have some booming subs when stuff blows up. Absolutely, I’d love some nice full surrounds. But this show came before all of that, and this is what it was. I venture to guess it sounds better than they did in broadcast.

When the series finally ended after seven years in 1992, fans were not so happy. As with many shows, there were efforts to bring the show back. The problem here is that the show wasn’t really cancelled, per se. It had run its course. Even fans like myself have to admit that things had pretty much gone as far as they could. At least that’s what we thought. Anderson returned for two made-for-television films that came out in 1994. Now there’s a rebooted series, and the character is back on our minds once again, albeit without its original star. But, make no mistake about it. This was the real stuff, and it’s so nice to see CBS making an effort to bring it out on Blu-ray now. Sales will determine how far these releases go. Pick them up now, or you may not get a chance to fill out your dusty old DVD collection with long-overdue Blu-ray discs. Is it now or never? “You could say that, yeah.”

Gino Sassani is a member of the Southeastern Film Critic's Association (SEFCA). He is a film and television critic based in Tampa, Florida. He's also the Senior Editor here at Upcomingdiscs. Gino started reviewing films in the early 1990's as a segment of his local television show Focus. He's an award-winning recording artist for Omega Records. Gino is currently working on his 8th album Merchants & Mercenaries. Gino took over Upcomingdiscs Dec 1, 2008. He works out of a home theater he calls The Reel World. Favorite films: The Godfather, The Godfather Part II, The Body Snatcher (Val Lewton film with Karloff and Lugosi, not the pod people film), Unforgiven, Gladiator, The Lion King, Jaws, Son Of Frankenstein, The Good, The Bad And The Ugly, and Monsters, Inc.
Charmed: The Complete First Season (1999) (Blu-ray) Tuesday Round Up: November 13, 2018