Posted in: Disc Reviews by Brent Lorentson on December 6th, 2018 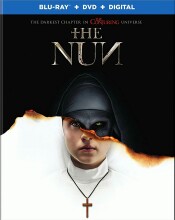 As a fan of The Conjuring films, I keep hoping that these spinoff films will manage to step up and be on par with The Conjuring, but instead they just keep letting me down.  But that doesn’t stop the hordes of fans from still seeing these films; after all, the pair of Annabelle films were box office hits, and The Nun had a nice theatrical run as well, earning over $110 million.  The Nun is a bit of a departure, as it takes us back to 1952 and is set in Romania to deliver a gothic horror story that seems as though it’s a bit of a nod to the old Hammer films from the 1950’s on into the 1970’s.  Does the film deserve its box office success? Well, thankfully I didn’t have to take a vow of silence, and I can tell you all about it.

The film wastes no time in setting the tone and delivering the terror as we see a pair of nuns walk through the bowels of an abbey in Romania as they open a big, scary door that has the inscription “God Ends Here”. Obviously whatever is beyond this door is bad, but why these nuns are so gung ho about opening this door and going inside isn’t explained (at least until much later on into the film).  It’s no surprise that the result of opening this door causes bad things to occur, one of which is a nun killing herself as she sees The Nun coming towards her.  This sparks an investigation by the Vatican to be led by Father Burke (Demian Bichir) and Sister Irene (Taissa Farmiga).

It being 1952 seems to do nothing for the plot other than to point out where it stands in the timeline with the other films in The Conjuring timeline.  I like this, because we don’t have to worry about the constraints of technology; we can simply accept they are in an isolated area in Romania, and because of this, it’s easier as a viewer to let our guard down and go along with Father Burke and Sister Irene.  To get them to the abbey where the deceased nun was found, they enlist the aid of Frenchie (Jonas Bloquet), who delivers supplies to the nuns who have taken up residence at the abbey.  Frenchie is definitely the character that is obviously the most out of place, and in most films these are the characters we tend to follow, but instead he is dismissed here and is only used later in a rather contrived way.  There are simply so many missed opportunities with these characters that at times it feels the story was forced to connect to the other films rather than be a film that can stand on its own.

Director Corin Hardy clearly had a vision for this film, and it is one that is shrouded in atmosphere.  Fog manages to blanket every inch of the exteriors at night and manages to be a presence in the few daytime sequences as well.  Factoring in some of the films inspired camera work, the film definitely sets a tone, and does so quickly, as it wastes no time to deliver scares to the audience.  It seems it’s the film’s goal, though, is to provoke more jump scares instead of delivering a solid story.  The problem is once we start to know what is going on at the abbey, things start to make less and less sense, and I feel re-watching the film will only present more issues.  For instance, when one of the nuns sits down with Sister Irene to tell the story about the abbey, well, it’s a bit over-the-top, and it left me wondering how the Vatican didn’t know more about this story.  Then there is the back story of Father Burke; he basically is a miracle hunter for the Vatican and the guy they call upon when things seem to get crazy in the supernatural department.  How he knows little to nothing about the history of the abbey just doesn’t add up for me. All I say is there is something pretty important that is at the abbey (and not a demon) that you’d expect the Vatican to have more control over.

The first half of this film had me really enjoy it; it wasn’t perfect, but it was still a good time; but then the jump scares became redundant, and the story started taking a strange direction.  While many of us were hoping for a fun origin story to the demon Valak, instead the story takes an unwanted direction, and in the film’s final moments as it attempts to connect itself to the timeline for The Conjuring films, it feels a bit forced.  Had this film attempted to just be a standalone horror film, it could have been a better film.

The Nun is presented in the aspect ratio 2.40:1.  The 1080p image is arrived at with an AVC MPEG-4 codec at an average of 24 mbps.  The film’s visual presentation is aiming towards a gothic and moody atmosphere, so if you’re looking for color to dazzle you, this isn’t the film to watch.  The skin tones are a bit pale and border on having a blue tint; this is due to the high saturation levels at times.  Another issue is there are times where the blacks are a bit crushed; this should be expected when you are shooting some of these sequences in low to no light.  Still I liked the look of the film and what they were going for; it definitely feels likes an old-time horror film.  One nice thing is how they shot the film using real castles for their locations, and it definitely adds to the style and look of the film, though I have to say one of the CGI bits where we see a snake emerge from a character’s mouth does look pretty bad, something I’d expect with a TV-movie budget, not a tent-pole, studio horror picture.

The Dolby Atmos-TrueHD track is what makes the watching the film a worthwhile experience.  The sound design for the film, from the crows in the cemetery to the creepy scrapes in a coffin, help create an immersive experience where the sound envelops you and where you can feel as though the scares can come from any direction. The dialog comes through clearly, and the score by Abel Korzeniowski helps set the tone and drives the film while it’s also the film’s quiet moments that are equally effective, though the film does depend on plenty of jump scares, so don’t be surprised when the bass kicks in at those jumpy moments.

A New Horror Icon: (5:18) The cast and crew discuss the impact of the demonic nun character from The Conjuring 2 film and how they are planning to delve into her history.

The Conjuring Chronology: (3:50) A quick overview discussing the films in The Conjuring universe and how they fit into the timeline.

Gruesome Planet: (6:18) Here we get to see the real locations in Romania where they filmed the movie.

Deleted Scenes: (12:18) There are seven scenes that you can watch with the option of a “Play All”.  Really most of the scenes are filler and nothing that would have added much to the film.

While the film is far from perfect, it’s still entertaining.  I’d really like to see a sequel for this film, if for no better reason that I feel there is a good film that can come out of the Valak character.  I’m a bit surprised how well this did at the box office, but I’m glad it’s helping maintain life in the franchise that James Wan has been creating.

Brent Lorentson is a horror writer and film critic based out of Tampa, Florida. With a BA in Digital Film, he co-wrote and co-directed Scavenger Hunt. His short stories have appeared in various horror anthologies. In 2019 his short script Fertile Blood will be a part of the anthology horror film Slumber Party. He is currently working on his first novel A Dark and Secret Place set to be released in late 2019. Favorite Films: Taxi Driver, Fight Club, I Saw the Devil, The Wild Bunch, Dawn of the Dead, A Clockwork Orange, Pulp Fiction, Heathers, The Monster Squad, and High Fidelity.
Ride (Blu-ray) Westworld: Season Two — The Door (UHD Blu-ray) (4K)