Posted in: Disc Reviews by Jeremy Butler on December 6th, 2018 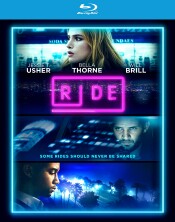 “Sometimes when you trust your impulses, incredible things can happen.”

I doubt this is what Jesse Usher’s character had in mind when he used it as a pickup line for Bella Thorne’s character. However, Ride does feature what turns out to be an extraordinary night for these two characters as they find themselves at the mercy of a demented individual with a .44 Magnum. This movie has been on my radar for a while, and it was a movie that I jumped at the chance to review. I’m fortunate to say that I was not disappointed, although I did find the ending to be a bit anticlimactic. When I saw the runtime for this film, a mere 77 minutes, I anticipated that the thrills would be over fairly quickly, but the story managed to pack quite a bit into this brief period.

James is a struggling actor by day, and a rideshare driver by night. If you haven’t already discovered, chauffeuring people isn’t exactly an exciting profession. I speak from experience. However, James’ night takes a turn for the better when he picks up Jessica (Bella Thorne). The two have immediate chemistry and make plans to meet up later on in the evening after James has finished his shift. That is, until his next fare, fast-talking Bruno, changes the plans.

Things start off a bit rocky, but after a while Bruno and James start to bond, and he convinces James to go back to Jessica and bring her along to a party. They make a pit stop for liquor, and that’s when things take a turn. Brandishing a firearm, Bruno forces James to rob the liquor store by holding Jessica hostage. However, this is just the start of what Bruno has planned for the two that evening as he forces them to participate in his twisted brand of fun. James and Jessica will have to work together and devise a way to escape their captor if they hope to survive.

As I said, this film had been on my radar for some time, but I did not know that it was based on a short film, which is included in the special features section. I know what you’re thinking; given the short runtime of this movie, perhaps the film is a short too. Nevertheless, as I mentioned earlier, they fit quite a bit into that time period. Ride turned out to be one of the top thrillers that I’ve seen this year. That accomplishment in no small measure is due to the performance of Will Brill as Bruno. From his demeanor to his dialog, Brill was an unpredictable and calculating villain. He actually turned out be just as threatening without the gun, as proven outside the liquor store when Usher’s character attempts to turn the tables. He also wasn’t your stereotypical villain as the motive for his actions remain a mystery for a majority of the film. Even after his character turned dark, he managed to balance intensity with lighthearted quips.  His performance will likely serve as a cautionary tale about the dangers of ridesharing.

In regards to Thorne and Usher’s performances, the two had a great chemistry, and their attraction was almost palpable, but their terror was not authentic enough for my taste. The two were too composed for my liking. I expected more trembling; they were more defiant and in control. Usher’s only real moment of fear was inside the liquor store. Thorne is a bit more of a seasoned actress, and was trying to reason with Bruno too early on. That needed to come later; she should have been quivering in the beginning. She made up for it when she utilized her musical chops, which I’m guessing was added in following the actress’s casting. As a collaboration they were right on the money, though, as their chemistry and exchange at the introduction excellently set the stage to show how a good night can rapidly take a turn for the worse.

Ride is presented in an aspect ratio of 2.35:1. The 1080p image is arrived at with an AVC MPEG-4 codec at an average of 21 mbps. The picture is average; it’s clear, but the amount of detail is the equivalent of a standard definition disc. I was hoping for a sharper picture resolution. There is nothing that really makes it stand out, with the exception of the overpowering presence of the lights of the oncoming headlights and streetlights, which are impossible not to notice.

The DTS-HD Master Audio 7.1 track is predominantly dialog-driven, so there is not a lot of activity from the subs with the exception of musical score during the introduction and conclusion of film. For the purposes of this film, the master audio is does not disappoint, as the sound remains clear and concise throughout the duration of the film. The musical score and dialog blend together well, with the music serving to set the stage for the film’s intensity.

Ride Short Film (15:00): A worthwhile watch, as it closely follows the same layout of the film with the happy addition of Will Brill in the role of Bruno.

Photo Gallery: A collection of production stills from the film. Nothing extraordinary, but interesting all the same.

I will express my disappointment with the ending, as I spent most of the film sitting on the edge of my seat, and then it ended so anticlimactically. It was kind of like the suspenseful buildup on a rollercoaster for the ride to break down just as it was about to pay off. That aside, Ride was an enjoyable movie experience, and I’m glad I got to review it.

Jeremy Butler is a film school graduate of the International Academy of Design and Technology. He is been writing for Upcomingdiscs since 2012; however, movies have played a big part of his life for much longer. Favorite genres include horror, science fiction/fantasy, and comedy. Favorite movies are V for Vendetta, Boondocks Saints, Kiss Kiss Bang Bang, and The Godfather.
Tuesday Round Up: December 4, 2018 The Nun (Blu-ray)