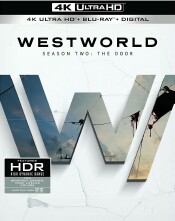 “They destroyed the man I was, but then I was reborn. And this time I came out breathing fire.”

Season 1 of Westworld — HBO’s mega-budget adaptation of Michael Crichton’s 1973 film of the same name — spent a lot of time exploring the nature of reality and humanity through a high-tech theme park’s robotic hosts. And while the show still has plenty of time for those themes, the second season can be tidily summed up with a phrase that nods to another Part II of an iconic sci-fi franchise: The Hosts Strike Back.

“I used to see the beauty in this world…but now I see the truth.”

If you’re not familiar with Westworld, both the 1973 movie and the show center around an adult-themed amusement park that allows its guests’ most perverse and violent instincts to run amok. But while the robotic hosts aren’t supposed to be able to harm the human guests, a systematic malfunction changes the game completely. Season 1 of HBO’s adaptation, which is spearheaded by Jonathan Nolan and Lisa Joy, ended with a bang. More specifically, it ends with many, many bangs as Dolores (Evan Rachel Wood) — one of the park’s oldest, most alluring hosts — executed park co-founder and director Robert Ford (Anthony Hopkins) to kick off a violent rebellion.

The ensuing action should’ve been pretty straightforward, but Westworld (for better and worse) goes for extra credit at every turn. The action in season 2 takes place across two different timelines. (Actually, that’s not true: the action on Westworld actually dips many decades into both the past and future, but in the interest of keeping things as concise as possible let’s focus on the two.) On one timeline, we follow a group of survivors and hosts in the immediate aftermath of Dolores killing Ford and the ensuing rebellion. Elsewhere, we flash forward about 10 days from Ford’s killing as Dolores and her impossibly handsome and loyal companion Teddy (James Marsden) lead an army towards freedom…whatever that looks like.

The two timelines are precariously tied together by Westworld’s head programmer Bernard (Jeffrey Wright), who was revealed to be robotic version of park co-founder Arnold Weber in season 1. The show once again intentionally muddies two different timelines in order to keep the viewer off balance. And while I can appreciate the notion of putting us in Bernard’s confused head space, the effect is often more bewildering than satisfying. (Poor Jeffrey Wright; he’s one of the most purely talented actors working today, but even he can’t seem to make heads or tails of what he’s supposed to be doing in a given scene.) Personally, I think the show loses its way when it spends too much time fixating on vaguely important-sounding concepts and destinations like “The Door,” “The Valley Beyond,” “The Cradle,” etc.

I prefer the more focused, all-horse-no-hat version of Westworld that leans into its seemingly unlimited budget and resources to dazzle viewers. While the show’s overall mythology can be both hokey and impenetrable, this second season also resulted in some of the best episodes of television this year. I loved Ep. 4/“The Riddle of the Sphinx,” which powerfully illustrated the season-long theme of the quest for immortality (and the dark side of data mining) by showing us a series of interviews between park funder James Delos (a sensational and heartbreaking turn by recurring star Peter Mullan) and William (Jimmi Simpson) who becomes a powerful figure in the world of the park.

That’s followed by Ep. 5/“Akane no Mai,” which bloodily pays off the promise of a Japanese-themed section of Westworld that was briefly teased in the season 1 finale. That episode includes a fantastic nod to the “Paint It Black” sequence from the show’s pilot, which is one of many fun references and inversions from the first season. (The season 2 finale/“The Passenger” starts with Dolores diagnosing Bernard, which is the opposite of their relationship in the first episode.) However, the standout hour is Ep. 8/“Kiksuya,” which is remarkable considering it focuses on an extremely minor character who barely speaks English. The episode is the most emotionally satisfying hour of Westworld, while revealing the entire history of the park through fresh eyes. (Kudos to Zahn McClarnon for anchoring the episode.)

McClarnon is far from the starriest name in a cast that has some big name actors doing double duty. Wood gets to indulge the dark side of Dolores’ personality (which has been programmed into her and is known as “Wyatt”), but it largely results in a scowlier performance. Ed Harris is back as The Man in Black, revealed to be the older version of Dolores-obsessed William, and brings a twinge of sadness to a man who has been driven mad by the park. Meanwhile, Thandie Newton assumes greater command than ever as Maeve acquires the ability to quite literally manipulate the other hosts as she tries to reunite with her daughter.

There are too many other actors, characters and storylines to get into; just know that the story’s theme of people potentially living forever through robotic doppelgangers means that even actors/characters who bit the dust are likely to show up in some form or another. Guess you’ll have to book your return trip to Westworld to see what happens.

Westworld: Season Two — The Door is presented in its original aspect ratio of 1.78:1. The ultra-high definition 2160p image is arrived at with an HEVC codec at an average of 55 mbps. Westworld is one of the few TV shows that is shot on film. The format continues to be a perfect fit, particularly for the Western sections inside the park. (Parts of the show are filmed in the same locations where John Ford made his classic Westerns.) The gorgeous filmic grain combines with the modern muscle of this terrific HDR presentation to offer an outrageous amount of textured detail in everything from the rough-and-tumble costumes, the varied set design, and makeup effects. (You can practically taste the blood.) Black levels are also as inky as it gets, which is particularly useful during the sequences in the bowels of the park. Those lab scenes are dark to begin with, but it’s even harder to see what is happening with the park on the fritz. Fortunately, separation and shadow detail is on-point here. Westworld is already in the conversation for the best looking show on TV, and this 4K presentation is as good as it gets.

The Dolby Atmos presentation defaults to a 7.1 TrueHD track and is almost as good as the visual presentation. Naturally, the track booms to life during the more explosive moments, including the battle between Dolores’ army and park security in Ep. 3/”Virtu e Fortuna” and the various season finale shootouts. In fact, the frequent gunplay results in the track’s most dynamic and electric moments as bullets and pained screams jump from one speaker to the next. However, when the bullets aren’t flying, this track is surprisingly dialogue-driven, with immersion coming in more subtle but effective ways. (Such as the faint hum of the faltering lights that barely illuminate the facilities beneath the park.) That’s really a minor quibble because this track makes the epic action on screen feel every bit as weighty as the visuals and story of Westworld.

All of the bonus material is presented in HD and available on both the 4K and Blu-ray versions of the final disc for season 2.

The Truth Behinds Delos: (12:47) Creators Jonathan Nolan and Lisa Joy are joined by cast and crew to break down the themes of season 2: if season 1 focused on the hosts who are trapped in Westworld, then season 2 is about the humans responsible for the park’s creation. More specifically, why would they pour so much money and resources into…a theme park? This featurette examines the quest for immortality and the real-life parallels of huge businesses insidiously gathering information from their customers.

These Violent Delights Have Violent Ends: (11:18) Focuses on the show’s “extreme filmmaking” (per star Evan Rachel Wood) that seeks to avoid glorifying violence in favor of showing how brutal it really is. Also delves into the central idea of the park itself — can the park’s visitors really behave violently without any long-lasting repercussion — and the way some heroic hosts from season 1 became violent villains in the second season.

Bring Yourself Back Online: Actors Leonardo Nam and Ptolemy Slocum (who play repair technicians Lutz and Sylvester) hosts a trio of casual conversations with cast members. Reflections on Season 2: (14:49) features Evan Rachel Wood, Jeffrey Wright, and James Marsden talking about getting caught off balance by the show’s twists. Of Love and Shogun: (15:26) has Thandie Newton, Simon Quarterman, and Rodrigo Santoro discussing their characters’ trip to Shogun World; and Journeys and Technology: (15:26) features Luke Hemsworth, Ben Barnes, and Angela Sarafyan drawing parallels between the tech in Westworld and real life. The show’s cast is so massive and sprawling that some of these actors had never even met prior to these chummy sit-downs. There is no Play All option

Creating Westworld’s Reality: Each episode gets its own dedicated featurette: most are in the 3-5 minute range, but the one for Ep. 5/“Akane no Mai” is almost 13 minutes long because it dives into the creation of Shogun World. The featurette  attached to the epic finale (“The Valley Beyond”) is also appropriately supersized, clocking in at almost 12 minutes. The cliché is that each episode of a show like Westworld is like making a mini-movie, so it makes sense for each of them to have their own Making Of. There is no Play All option.

Westworld: Season Two — The Door features all 10 episodes on three discs. This 4K set boasts a reference-quality A/V presentation and a strong set of featurettes exploring the themes of season 2.

The finale was another game changer for a variety of reasons. Without spoiling too much, it seems like the show might be ready to move on from the park. A season of Westworld that takes place outside of Westworld — and will feature Breaking Bad’s Aaron Paul in a secret role — seems like a risky move because “a strange new light can be just as frightening as the dark.” But I’m more than willing to saddle up and see what happens.