Posted in: Disc Reviews by Brent Lorentson on January 16th, 2019 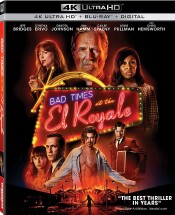 These days when the studios are cutting together trailers to promote their upcoming films, I feel one of the number one complaints people have is that the trailer gives too much away, so why bother shelling out the cash to see it on the big screen?  When it comes to the trailer for Bad times at the El Royale, it gives you a glimpse at what is to come, but the result is something clever and ambitious. Unfortunately, it feels a bit too familiar.  This is the second feature film from writer and director Drew Goddard, who first made a splash onto the screen with his hit film Cabin in the Woods.  While I enjoyed his first romp that played with many of horror’s stereotypes, I still felt the film fell a bit flat.  Unfortunately, though I enjoyed this fun little noir film he’s put together, I feel it too falls a bit flat, but mostly this is due to its 140-minute runtime.

The film opens up with a great sequence, where we get to watch as a man comes into a motel room and goes through the process of burying a bag beneath the floorboards.  It’s a long static shot that nicely sets the tone for the film we’re about to watch, and with the nice little twist at the end of the scene, we’re ready to jump into this film.  Sadly, as we are introduced to visitors at the El Royale motel, things get a bit long-winded, as it seems the sequence of just having the characters checking into their rooms will never end.  It works as setting a tone and introducing us to characters, but the problem is we spent all this time with character development just to discover no one seems to be who they claim to be.  I’m all for having twists, but this sequence just goes on for too long, and unfortunately that’s pretty much how each sequence plays out, each clever one stretching on for a bit too long.  This is where I understand where people draw their comparisons to Quentin Tarantino, only Tarantino can make long talky sequences crackle with humor, dread, and cool all at once, and Goddard just can’t pull it off.

One thing that leaves me on the fence is how the film plays out.  It’s told mostly as though you were reading a book, and each sequence is its own chapter.  This works so we can stay with characters for an extended amount of time, so that when their chapter ends, we can simply move on to the next character or story, so we see how the stories and characters can overlap.  This is a device Goddard takes advantage of to build suspense and keep the audience hanging, but for some this may be a bit off-putting.

There is Jon Hamm, who is playing a travelling salesman, who is adamant in getting the honeymoon suite at the motel, but as soon as he gets to his room he starts combing through it and finding numerous hidden microphones.  While this sequence is fun and does a great job at showing us that things are not what they seem, events unfold that seem to raise only more questions.  We meet Darlene Sweet (Cynthia Erivo), who is a woman with big dreams of becoming a singer; there is Father Daniel Flynn (Jeff Bridges), who is struggling with dementia and has a mysterious presence at the motel; then there is Emily (Dakota Johnson), who happens to have a young girl bound and gagged who she takes to her room.  This is a great setup, and really as we see these characters go to their rooms and their stories play out, the film is a lot of fun.  This is kind of a tough film to write about, because there are some twists early on that take the film into some surprising directions that I don’t want to spoil for anyone.

So for those wondering about how Chris Hemsworth factors into all of this, well, that’s one of the film’s fun little twists that I’ll say I wish we had more time with.  Hemsworth seems to be having a blast playing the role of Billy Lee, though we have to sit through a good portion of this film before he even makes an appearance, and where he really makes an impact is in the film’s third act.  Another cool thing about the film that simply isn’t explored enough is the history of the motel.  So much is teased about what has gone on at the motel in the past, and it functions only as a tease for all the violence and sleaze that seems to have gone on in motels past.

Bad Times At The El Royale is presented in an aspect ratio of 2.39:1. The ultra-high-definition 2160p  image is arrived at by an HEVC codec with a rather constant bitrate of 50 mbps. This ultra-high-definition image presentation benefits from the choice of using film. That means a native 4K source instead of the traditional 2 to 2.8K average for modern digital films. The grain gives the film a rather necessary organic feel that absolutely feeds into the film noir style and colors. While the film attempts to give us a contrast in color temperatures between a cooler Nevada side and a warmer California side, the default is a very warm color presentation. There are a lot of orange and sepia tones that again play a crucial role in the style. Black levels are quite nice. The walkway behind the rooms allows not only nice shadow definition but also provides for some pretty cool contrast, helped considerably by the HDR.

The Atmos track defaults to a pretty solid 7.1 mix. Music cues play a very important role in this film. I’m very fond of the soundtrack of 1960’s Motown songs that provide most of the film’s sonic enjoyment. It’s not an aggressive surround mix, which would defeat the carefully constructed intimate feel of the film. Dialog cuts through, and that’s where the subs add just the right balance to give the voices depth, particularly Jeff Bridges, who has such a distinctive voice, which is reproduced quite nicely here.

Making Bad Times At The El Royale: (28:35) The feature doesn’t waste time on a lot of film clips. Instead we get plenty of behind-the-scenes footage. The focus is, naturally, on design with concept art, costume film tests, and the design and construction of the elaborate set. You get plenty of cast and crew bits to tie it all together.

Each character in this film could easily have their own standalone film and be engaging, which almost has me wondering if this at one time was possibly a TV show Goddard had pitched but had been rejected.  This would work as a great anthology series, but as a film it seems there is too much plot and character to sandwich into the film’s already bloated running time.  This film will definitely have an audience, and I do see this garnering a cult following, because there is plenty to enjoy here; by the way, this film has a really great soundtrack, and many of the moments where we hear Cynthia Erivo sing are incredible.  I had a good time at the El Royale, but this film could have been tighter, and it would only have improved the experience with 20 minutes shaved off.

Parts of this review by Gino Sassani

Brent Lorentson is a horror writer and film critic based out of Tampa, Florida. With a BA in Digital Film, he co-wrote and co-directed Scavenger Hunt. His short stories have appeared in various horror anthologies. In 2019 his short script Fertile Blood will be a part of the anthology horror film Slumber Party. He is currently working on his first novel A Dark and Secret Place set to be released in late 2019. Favorite Films: Taxi Driver, Fight Club, I Saw the Devil, The Wild Bunch, Dawn of the Dead, A Clockwork Orange, Pulp Fiction, Heathers, The Monster Squad, and High Fidelity.
When Harry Met Sally…30th Anniversary Edition (Blu-ray) Speed Kills (Blu-ray)