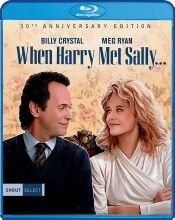 “You know, the first time we met, I really didn’t like you that much.”

I didn’t become acquainted with When Harry Met Sally… until well after the Billy Crystal/Meg Ryan flick had established itself as a bona fide romantic comedy classic. (I was 7 when the film came out in 1989.) So when I finally got around to watching it in my late teens, the “I’ll have what she’s having”  punchlines and general set-up involving an unlikely romantic pairing felt overly familiar. I enjoyed it just fine, I definitely appreciated it, but I wouldn’t quite call what we had love. Shout Select, an imprint of Shout! Factory, has released a 30th anniversary Blu-ray of When Harry Met Sally… And after revisiting this film years later, I’m asking myself the same question that Harry and Sally ponder after being friendly for years: is this love?

“Men and women can’t be friends because the sex part always gets in the way.”

Harry Burns (Crystal) and Sally Albright (Ryan) first meet shortly after graduating from college as they take a road trip from Chicago to New York…and they immediately rub each other the wrong way. Harry is sarcastic and fatalistic, while Sally is bubbly and (judging by her *very* particular restaurant orders) high-maintenance. Harry insists that (heterosexual) men and women can’t just be friends, while the more optimistic Sally scoffs at such a simplistic assessment of complex male/female relationships. Harry’s theory is put to the test as he and Sally keep reconnecting via chance encounters and eventually build a great friendship over the course of 12 years. But is that friendship enough, or is it inevitable that Harry and Sally’s strong bond will lead to something else?

When Harry Met Sally… was directed by Rob Reiner and written by the late great Nora Ephron, and there’s a decent chance they were both working at the peak of their powers here. (Reiner made another 5-star movie, The Princess Bride, just two years before…so this was quite a run for him.) In addition to the impressive storytelling and filmmaking craft on display here — two facets that tend to get ignored in most rom-coms that are basically just populated with pretty people and fancy clothes — When Harry Met Sally… shines because it feels personal and lived-in. (Check out the Special Features section to get a sense of just how much Reiner and Ephron incorporated their real-life points of view into the story.)

Ephron and her dazzling screenplay deservedly get the lion’s share of the credit for the movie’s success and lasting power, even though classic lines like “I’ll have what she’s having” were ad-libbed on the set. I’d actually forgotten that When Harry Met Sally… is rated R; even though characters aren’t shy about letting the F-bomb fly, it never feels vulgar or forced. Instead, When Harry Met Sally… is a frank and thoughtful exploration of the power of friendship and the different types of attraction (physical, emotional, intellectual) that can exist between a man and a woman. This is also a movie that clearly loves movies: the characters connect by discussing films like Casablanca and The Lady Vanishes.

Speaking of Casablanca, the split-screen sequence of Harry and Sally watching the classic Humphrey Bogart film in bed together (but in their separate apartments) is just one of the low-key inventive flourishes Reiner works into the film as a director. If there’s one critique of Reiner’s work here, it’s that it can feel sort of Woody Allen-lite due to the heavy reliance on New York City exteriors. That’s a very minor quibble though, since When Harry Met Sally… is a lot more big-hearted than Allen’s NYC films and effectively establishes itself as its thing.

Of course, all the good work by Reiner and Ephron falls apart if they have the wrong stars on screen. The great news is that Crystal (in full-on sarcastic prankster mode) and Ryan (becoming an effervescent movie star before our very eyes) are perfect together. Crystal brings a relatable and essential Everyman quality to Harry; everyone can recognize the guy who’s previously been burned by love and carries himself accordingly. Meanwhile, Ryan mostly manages to bury her movie star looks under a bundle of hair, clothes and neuroses. Crystal and Ryan are great when they’re doing their own thing: Bruno Kirby (“Baby fish mouth!”) and the late Carrie Fisher (as the assertive Marie) swipe a handful of scenes as Harry and Sally’s respective best friends. But the stars are truly sensational together, whether Harry and Sally are bickering or falling in love.

Most importantly, the movie sticks the landing. Unlike a lot of forced or contrived rom-com conclusions, the ending of When Harry Met Sally… is completely satisfying while maintaining the rest of the movie’s signature heart and wit. (No spoilers here, but you can see for yourself.) Simply put, this is as good as romantic comedies get.

When Harry Met Sally… is presented in an aspect ratio of 1.85:1. The 1080p image is arrived at with an AVC MPEG-4 codec at an average of 32 mbps. This 30th anniversary release boasts a “new 4K scan of the original camera negative.” The result is a clean, consistently vibrant presentation that maintains the texture of the original film. This is especially useful during the many New York City exteriors, which look phenomenal here and help transport the viewer to a more romantic version of NYC from the recent past. Flesh tones are pleasingly warm, even during the wintry New Year’s Eve sequence.

The DTS-HD Master Audio 5.1 track is weightier than you might expect, considering this is a dialogue-driven romantic comedy. Most of the weight comes from the full-bodied presentation of Marc Shaiman’s score and Harry Connick Jr.’s voice (and piano). That being said, the many scenes of Harry, Sally, and friends hanging out in the streets (and at least one baseball stadium) of New York give the rear speakers plenty of chances to offer some effectively immersive ambient noise in the background.

Commentary by Rob Reiner, Nora Ephron, and Billy Crystal: This trio is phenomenal together, naturally prompting each other to tell stories that inspired the making of this film. This commentary is a fantastic combination of production details (Crystal immediately mocks his Jack Lord wig from the first scene), personal stories (Reiner met his second wife while working on this film), and genuine camaraderie. Definitely recommend you check this out.

Commentary by Rob Reiner: On the other hand, this solo commentary from Reiner features some of the same information/stories, but many more stretches of silence as the director seemingly searches for something to say. Skip this one and listen to the group commentary with Reiner, Ephron and Crystal.

Aside from “Scenes from a Friendship,” all of the bonus material is presented in standard definition and has been ported over from previous DVD/Blu-ray releases. The two commentary tracks can be accessed through the Audio portion of the Main Menu (not the Bonus section).

Scenes from a Friendship: (44:34) Reiner and Crystal reunite in this featurette to reminisce about When Harry Met Sally…30 years later. Reiner refers to Crystal as an (on-screen) extension of himself and reveals the two pals were a bit hesitant to work so closely with one another and jeopardize their friendship. (Which isn’t unlike Harry and Sally fretting about taking their friendship to another level.) This is a wonderful conversation between two close friends who discuss the genesis of the project, share anecdotes about the production, and pay tribute to the late Nora Ephron, who deservedly gets credit for bringing strong female insight to the movie. Presented in HD.

How Harry Met Sally: (33:21) Cast and crew share their thoughts on this meaty behind-the-scenes featurette that focuses on the movie’s frank exploration of male/female relationships and the making of the film. It’s becomes apparent very quickly that Reiner and Ephron drew heavily from their own respective experiences with relationships to provide the yin and yang for Harry and Sally on screen.

It All Started Like This: (19:48) Reiner and Ephron sit down to chat and share fun stories about working on the project, which included Ephron rejecting Reiner’s initial pitch during their first lunch. Some of the same anecdotes featured on the previous two featurettes are recycled here, but this is still worth a watch thanks to Reiner and Ephron’s easy banter.

What Harry Meeting Sally Meant: (12:29) Cast and crew — and the likes of film critic Richard Roeper — convene to discuss the impact of the film. Crystal notes that fans can credibly watch it during Valentine’s Day and New Year’s Eve, which makes the movie a “perennial.”

So, Can Men and Women Really Be Friends: (7:54) The When Harry Met Sally…team —and a couple of relationship/sociology experts — thoughtfully tackle the movie’s central question. Not surprisingly, the opinions here vary based on personal experiences.

Deleted Scenes: (7:24) This collection of deleted scenes features an extended look at Harry and Sally’s first road trip together (including Crystal’s Vito Corleone impersonation) and Harry’s harrowing night in bed with Sally after they have sex for the first time. There’s also an extended version of Harry and Sally’s talking head testimonial from the end of the film.

Creating Harry: (5:47) Crystal, Reiner and the rest of the team discuss the Harry character, who is described as a neurotic, lovable, “glass half empty” kind of guy. The idea that Harry was Reiner’s on-screen alter ego is revisited here.

Stories of Love: (5:10) Shines a light on the interview segments in the film featuring real-life, long-term couples discussing how they met and fell in love.

When Rob Met Billy: (3:56) Crystal recalls meeting Reiner when he was cast on All in the Family in 1975, and the two became best friends almost instantly. This featurette also focuses on Crystal’s creative contributions to the film, including the classic “I’ll have what she’s having” line.

Music Video by Harry Connick Jr.: (2:50) The crooner won his first Grammy for his contributions to the soundtrack. Here, Connick performs “It Had to Be You.”

When Harry Met Sally… is the best-case scenario for the beloved but much-maligned romantic comedy genre. The stars are both relatable and well-balanced, the script is equal parts tart and sweet, and the movie is infinitely quotable and chock full of memorable sequences.

I thoroughly enjoyed revisiting the film as a definitely older and debatably wiser version of myself. Even though there’s only one new special feature, it’s a good one. The movie also looks better than it ever has on home video, so I recommend you scoop up this 30th anniversary edition if you’re in the mood for love…or laughs.