Posted in: Disc Reviews by Brent Lorentson on January 17th, 2019 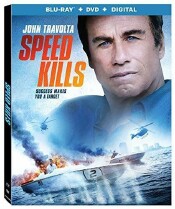 John Travolta is one of those guys I like, but it seems like it has been ages since he’s done a great film.  Sure, he was great in The People vs. OJ Simpson where he played attorney Robert Shapiro, but apart from that role, it’s been a while since we’ve seen Travolta really make a splash at the box office. Personally I love seeing the guy on screen. Blow Out, Get Shorty and Pulp Fiction are just a few of my favorite films that he has been in, and I keep hoping his career will bounce back, but unfortunately it doesn’t look like it’ll be happening any time soon. Speed Kills is a film that has a story that is oozing with so much potential that if it were put in the hands of Brian De Palma or Michael Mann you could almost guarantee this film would be destined for greatness.  Unfortunately the result is a frustrating mess that manages to make boat racing and drug smuggling in the age of the “cocaine cowboys” seem boring.

One of the film’s biggest faults is to open where the story ends, where we see Ben Aronoff (Travolta) being the target of a hit.  The film then wants to take us back in time, where we have Aronoff narrating his story of how he had his rise and fall in Miami that reeks of a bad imitation of Henry Hill from Goodfellas.  Seriously, in less than 10 minutes this film manages to sabotage itself, and it doesn’t get much better from here.  This isn’t Casino where by some miracle our narrator manages to escape an exploding car. Having this given away so early on in the film is simply a giant mistake. If you eliminate this opening sequence, instantly you have a better film, but apparently even with over 40 named producers connected to the film, no one seemed to have realized this.

Aronoff apparently used to run a successful (mob-connected) construction business, and after he gets muscled out of Jersey by crime boss Meyer Lansky (James Remar), Aronoff packs up the family and takes them to Miami Beach to start up a new business.  What’s strange is how quickly Aronoff seems to take to his obsession with speedboats. Sure, he explains it (sort of) in the narration, but it boils down to he likes them because they are “fast and sexy”.  But we never get to see Aronoff make this kind of connection to the boats; there’s no moment where we see him make this sort of intimate transition.  Even as we see him getting involved with the boat racing, he always seems like just the money guy who enjoys the passenger seat rather than seeing him embrace the moment of being behind the wheel and bonding with the vehicle.

But a bigger issue is the lack of connection we with Aronoff to anything. For instance, we see how he has a disconnect with his family, and it takes a tragic car accident for Aronoff to finally spend time with his son.  This moment is treated as though it were life-changing and that possibly the son will become involved with his father’s life, but this simply gets pushed aside and ignored just when the film seemed to be injecting a bit of heart. It’s not as though Aronoff is a bad guy; the film just doesn’t do anything to make him very likeable, especially as we see him working his way through an array of women over the course of the film.

Another issue with the film is with the film’s editing.  For a film titled Speed Kills, it seems to crawl at such a slow pace that even the boat racing scenes manage to lack energy.  But one of the worst moments is in the later portion of the film as we see Aronoff in his truck attempting to catch up to some thugs. There is such a bad edit and speed ramping issue I had to stop and rewind just so I could re-watch this faux pas again. This is something I expect from a no-budget student film, not one with a moderate budget where editors are being paid real money.  I can keep going about what’s wrong with this film, but really I just don’t see the point.  This is a dud, plain and simple.

Speed Kills is presented in the aspect ratio 2.35:1.  The 1080p image is arrived at with an AVC MPEG-4 codec that bounces all over from 14-36 mbps. With a good portion of the film shot using daytime exteriors, the film looks good thanks to the cinematography from Andrzej Sekula (Pulp Fiction and American Psycho).  The film definitely has a slick and polished look to it that fits the style of the film, but there are some definite issues, especially in a sequence where we see a boat race during a major storm.  The CGI is terrible, and the blending is some of the worst I’ve seen.  Sometimes having HD detail can be harmful, and that is definitely the case in regards to Travolta’s “hair” in this film.  What’s also missing is the lack of color in the film. It’s supposed to be in Miami during the 60’s thru 80’s when the beaches and clubs were filled with vibrant shades of neon and pastels, and that’s all missing here.  In the few night shots we don’t get much in the way of black separation, and it just delivers a distinct HD look.  There are bits where some old film stock footage is used (mostly for the boat scenes), but this just makes it all the more obvious that the film was shot digitally, and it’s simply a distraction rather than benefiting the film in any way.

The DTS-HD Master Audio 5.1 track is serviceable for the film, but it’s nothing that I’d call robust, nor does it take advantage of the surround sound experience.  The few action scenes in the film (mostly boat races) are lacking any punch. In some of the scenes rather the balance the sound they simply choose to remove the dialog, and the score is a bit forgettable as well. The dialog is clean, but when it comes to the ambient sound, it’s there, but it’s not utilized to create an immersive experience.

There are no special features for the film.

Despite having a cool premise with speedboats and drug smuggling, this film manages to make it all seem boring and uninspired.  Hopefully someone will revisit this story who has some passion for the project and can give it the attention it deserves.  Travolta does what he can with this film, but the writing and the direction just lack the energy this film needs.  It’s only January, but I feel this already will be at the top of my list for worst films of the year, and that’s a shame.

Brent Lorentson is a horror writer and film critic based out of Tampa, Florida. With a BA in Digital Film, he co-wrote and co-directed Scavenger Hunt. His short stories have appeared in various horror anthologies. In 2019 his short script Fertile Blood will be a part of the anthology horror film Slumber Party. He is currently working on his first novel A Dark and Secret Place set to be released in late 2019. Favorite Films: Taxi Driver, Fight Club, I Saw the Devil, The Wild Bunch, Dawn of the Dead, A Clockwork Orange, Pulp Fiction, Heathers, The Monster Squad, and High Fidelity.
Bad Times At The El Royale (UHD Blu-ray) (4K) Halloween (2018) (UHD Blu-ray) (4K)