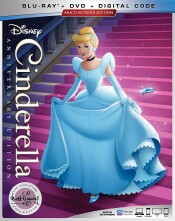 “Once upon a time in a faraway land, there was a tiny kingdom: peaceful, prosperous, and rich in romance and tradition. Here, in a stately chateau, there lived a widowed gentleman, and his little daughter, Cinderella. Although he was a kind and devoted father, and gave his beloved child every luxury and comfort, still, he felt she needed a mother’s care. And so he married again, choosing for his second wife, a woman of good family, with two daughters just Cinderella’s age, by name, Anastasia and Drizella. It was upon the untimely death of this good man, however, that the stepmother’s true nature was revealed: cold, cruel, and bitterly jealous of Cinderella’s charm and beauty, she was grimly determined to forward the interests of her own two awkward daughters. Thus, as time went by, the chateau fell into disrepair, for the family fortunes were squandered upon the vain and selfish stepsisters while Cinderella was abused, humiliated, and finally forced to become a servant in her own house. And yet, through it all, Cinderella remained ever gentle and kind, for with each dawn she found new hope that someday her dreams of happiness would come true.”

Snow White And The Seven Dwarfs put the Walt Disney Studios on the map. It’s a literal truth. Walk had mortgaged his entire worth to make the film and used the incredible box office return to create what we today call Walt Disney Studios. But it wasn’t quite the happily-ever-after fairy tale ending that Walt and his new studio might have hoped for. The studio churned out a couple of films that are classics today but didn’t pull in the kind of money they needed to stay afloat. Both Pinocchio and Fantasia were masterpieces greatly appreciated today, but the years of WWII found little extra money for extravagances like going to the movies. The studio was in danger of closing, and they had pretty much one more shot to turn it around. Could lightning hit the same place twice? Cinderella proved that it could, and put the studio firmly back on solid ground.

“It was a wonderful dream.”

Cinderella’s dreams were aligned with Uncle Walt’s. You know the story by now, and if you don’t, shame on you. Popular phrases in our modern lexicon owe their origins to the story. When I was a kid the teen driver’s license expired at midnight and of course, we called them “pumpkin licenses”. Cinderella finally gets her happily-ever-after with her prince when she tries on the glass slipper she left behind. Ever hear the expression, “If the shoe fits”? There are more, but I think you get the idea.

Cinderella saved the studios, and it was an all-hands-on-deck effort. Seven of Disney’s famous nine old men were on hand to lend their talents to the film. These were the best animators of their day and still stand as an inspiration for young artists who come to dream of the big time. They each had very specific roles tied to their abilities. That was part of Walt’s genius. He knew how to match animator with subject. Eric Larson and Marc Davis animated Cinderella herself. The combination used Larson’s sophistication with Davis’s simplicity tendencies. Milt Kahl animated the prince, who was actually voiced in song by television talk host Michael Douglas. Kahl also did the rest of the royals by drawing the Duke and King along with the Fairy Godmother. Frank Thomas animated the evil stepmother, while Ollie Johnston animated the two stepsisters. Wolfgang Reitherman animated one of the film’s most iconic scenes showing the mouse trying to carry the key up the stone stairs. Ward Kimball handled the mice in all of their other scenes. He also brought Lucifer the cat to life. It was certainly a group effort, and one that paid off. Who knew then that this simple animated feature would make possible in the future Marvel superheroes and Jedi Knights to continue to zoom across our screens?

Cinderella is presented in its original aspect ratio of 1.33:1. The 1080p image is arrived at with an AVC MPEG-4 codec at an average 35 mbps. You have the option of including a wonderful painted border that fills out your widescreen television. It’s very well done and will not interfere with your enjoyment. The image itself is as close to pristine as you could wish for. Colors are brilliant and as vibrant as they were 50 years ago. The print has been restored to a flawless condition. Disney continues to amaze with these Blu-ray restoration projects.

The DTS-HD Master Audio 7.1 might not jump out at you as much as the restored video. It’s still quite an impressive audio presentation. You’d expect plenty of noise and imperfections that you just won’t find no matter how hard you listen. The music might not sound as dynamic as a modern piece, but it flows quite pleasantly. Dialog is crystal clear. You can also enjoy the film in the original mono if you’re a purist.

The only new bonus feature is a 5-minute film trivia feature.

Cinderella was anything but a simple film for the Walt Disney Studios. If it failed it wasn’t just Walt who would lose; it was hundreds of studio employees. It was a process that took the better part of three years. The film was first storyboarded and then shot in live action just like any other film. This footage was used by the animators as a reference work. Almost three years to create a film that would save a studio and enchant a world weary from war. “Even miracles take a little time.”

Gino Sassani is a member of the Southeastern Film Critic's Association (SEFCA). He is a film and television critic based in Tampa, Florida. He's also the Senior Editor here at Upcomingdiscs. Gino started reviewing films in the early 1990's as a segment of his local television show Focus. He's an award-winning recording artist for Omega Records. Gino is currently working on his 8th album Merchants & Mercenaries. Gino took over Upcomingdiscs Dec 1, 2008. He works out of a home theater he calls The Reel World. Favorite films: The Godfather, The Godfather Part II, The Body Snatcher (Val Lewton film with Karloff and Lugosi, not the pod people film), Unforgiven, Gladiator, The Lion King, Jaws, Son Of Frankenstein, The Good, The Bad And The Ugly, and Monsters, Inc.
Dead Trigger (Blu-ray) Gotham: The Fifth And Final Season (Blu-ray)