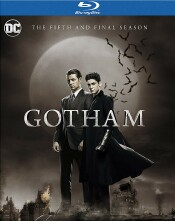 “After the bridges blew and the government declared Gotham off-limits the city was up for grabs. Given over to criminals and murderers. Now territory is controlled by whoever has enough power to hold it. I mean we have Penguin in City Hall for God’s sakes…”

Gotham City. You know the name, just as you know the names of Metropolis and Smallville. These are important places in the DC comics universe that have existed as part of modern American mythology since the 1930’s. Warner Brothers has decided to tackle Gotham in much the way it spent 10 years bringing us to Smallville. But there is a decided difference to be found here. Smallville was indeed the origin story of Superman, and while the obvious answer might be that Gotham serves the same role for Batman, I found that to be a bit of an oversimplification. This is not the origin story for Batman, and while many of the future major villains from that universe take their first baby steps here, this is not their origin story either. This is an origin story for the city of Gotham itself. Unlike many heroes, Batman was a product of his environment. This is the story of how one city devolved so badly that a hero like Batman was necessary. What we see taking shape here is a place where a certain Dark Knight can thrive and spread his wings. That’s finally going to happen in the final moments of this the fifth and final season of Gotham. It’s out now from Warner Brothers, and it’s the last 12 episodes of the Batman origin story. But Gotham was more than that.

The city itself is the most important character of the show. To make that effective over a season of stories, the city must be created with a kind of style and atmosphere that would set it apart. While there are certain aspects of this Gotham City that owe to Tim Burton’s style that set the mood for the first four films, there are also aspects of Nolan’s gritty city here as well. It’s at once familiar, but this is also unlike any city you’ve seen on television before. It exists out of place or time. There are cell phones, but not really computers. Detectives look through old newspaper stories on microfilm projectors. Some of us remember the days you had to do that at your local library. The cars are mostly from the 1970’s, while the building decor and costumes appear more at home in the 1940’s. It’s an industrial city, but one where whatever industry once thrived here has long gone away. For something conceived in the original four-color world of comic books, this is a dark and colorless place for the most part. The only thing that’s missing is the “abandon hope all ye who enter” sign at the city limits. This season Gotham is even darker and more desperate. In a storyline very much like that of the final Nolan Dark Knight film, Gotham’s bridges have been blown by the Jokerish Jeremiah, and Gotham City is closed off from the rest of the world. The government has abandoned the city because they fear it is too dangerous a place to be reunited with the rest of the country.

So now Gotham City is separated into various territories controlled by the various bad guys. Penguin (Taylor) has taken over City Hall and built a bullet factory, so he’s the only place to get fresh ammo. Barbara (Richards) runs a women-only club where men can only visit for a price. She’s more interested in information than any other trade. Ed Nygma (Smith) has taken over the library where he struggles with his own hidden demons. He continues to wake in strange places, believing that his Riddler personality is toying with him. When he finds out he has been controlled, he goes on a hunt for the person who is controlling him. Jeremiah (Moneghan) has formed a cult where people are literally dying to get in. His most faithful follower is the Harley Quinn-like character, Ecco (Root-Dodson). Bruce (Mazouz) sacrifices greatly to help Selena (Bicondova) to walk again. But the cure brings out the future Catwoman in her, and the duo find themselves on a dangerous path to get revenge on Jeremiah.

All of this time Jim Gordon (McKenzie) has created a “green zone” where he is trying to protect and feed as many of the people as he can. But it’s a constant struggle against all of the criminal elements who want to take it all down. They do not want to see Gotham reunited, because they would lose their kingdoms, so they hatch all varieties of plans to make Gotham suffer and the outside world abandon her forever. Gordon even struggles when a military unit is finally there to help. But Ed Nygma isn’t the only one being controlled. Good guys and bad guys end up teaming up to save the city from a revenge plot hatched by Nyssa Al Ghul, played wickedly by Jaime Murray. If you have any doubt how much twisted evil she’s capable of, look no farther than her season as Dexter’s killing partner. In the final episode they re-cast Selena with Lili Simmons, and it’s a remarkable likeness. It’s some fine casting work. They didn’t need to re-cast for the Bruce Wayne role, because you only see him once during the episode, and then only under the cowl.

In many ways Gordon’s story is straight out of Serpico. He soon learns that pretty much everyone is on the take, or at least willing to look the other way. He also quickly discovers that his fellow officers won’t back him up if he gets into a jam. While Harvey is a corrupt cop, he’s been waiting desperately for an honest example to follow, and Gordon is that man. Person Of Interest Fans will understand that I found him very much like Fusco from that show. He’s a bad cop who wants to be good but is not strong enough to take on the system alone. His road to redemption is a nice sidebar to all of this villainy. This season he has to be the strongest he’s ever been to back Gordon up against astronomical odds. And there’s a nice episode that takes a little break from the main story where Harvey’s past comes back to haunt him and maybe kill him.

The show was developed by Bruno Heller, who last provided us with The Mentalist. Here he has managed to tap into the comic book world just enough that he teases us with things we know. You almost feel proud of yourself when you recognize elements that will play into the future of the Batman universe. It’s a smart approach that helps make the audience active participants in the show. There are so many little Easter eggs here that you have to stay on your toes. It also makes all of this very easy to watch again. There are bound to be things you missed the first time around.

Deleted Scenes: A collection of these is found on each disc.

Gotham – A Modern Mythology: (16:12) This feature looks at the scope of the story and its mythology. The time is split between the city itself and the Bruce Wayne/Batman character.

It’s always tough to say goodbye to any show that you fall in love with. But in Gotham‘s case the story itself goes on, and it will with the upcoming Batwoman series and the continued Arrow-verse on the WB. We can’t take 30 years getting to Batman. It would stagnate a rich environment of heroes and villains. “Is that what you want?”

Gino Sassani is a member of the Southeastern Film Critic's Association (SEFCA). He is a film and television critic based in Tampa, Florida. He's also the Senior Editor here at Upcomingdiscs. Gino started reviewing films in the early 1990's as a segment of his local television show Focus. He's an award-winning recording artist for Omega Records. Gino is currently working on his 8th album Merchants & Mercenaries. Gino took over Upcomingdiscs Dec 1, 2008. He works out of a home theater he calls The Reel World. Favorite films: The Godfather, The Godfather Part II, The Body Snatcher (Val Lewton film with Karloff and Lugosi, not the pod people film), Unforgiven, Gladiator, The Lion King, Jaws, Son Of Frankenstein, The Good, The Bad And The Ugly, and Monsters, Inc.
Cinderella (1950) Anniversary Edition (Blu-ray) Criminal Minds: The Fourteenth Season