Posted in: Disc Reviews by Michael Durr on October 22nd, 2019 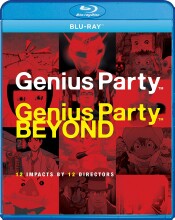 As a kid growing up in the 70’s and 80’s, I quickly grasped the concept of a good short.  Whether it was a tiny piece before the movie started at my local cinema or a Looney Tunes cartoon on my 13-inch television, I saw how hard it was to capture the audience in the span of such a small frame of time.  However, when those directors are able to capture that lightening in a bottle, it can produce some amazing results.  Today, we are taking a look at Genius Party and Genius Party Beyond and see if a few of these fantastic directors can create a memorable slice of anime.

Genius Party and Genius Party Beyond are two collections of shorts released in 2007 and 2008 respectively.  It is twelve pieces by twelve different directors with different animation styles.  In the following bylines, I’ll try to piece together what each of these takes are about and then have some broad comments after.

Genius Party (directed by Atsuko Fukushima) – This is more of an intro than anything else.  A bird-like creature is walking in the desert and finds a bunch of egg-like stones.  The creature sucks the energy of the egg and can suddenly fly.  He then finds another egg and another and another.  All in time to some groovy music.  No rating from me on this one, but it gets me excited for what’s to come.

Shanghai Dragon (directed by Shoji Kawamori) – Gonglong, a special needs child, is drawing while other kids are playing and cutting up.  A blast hits the ground and leaves behind a strange pulsating dagger.  Gonglong picks it up and soon realizes that it brings his drawings to life.  Then he is suddenly thrust into intergalactic warfare.  Pretty good, but unfortunately the hero isn’t very likable, and that snot is downright annoying.  3/5

Deathtic 4 (directed by Shinji Kimura) – A boy lies in a bed moaning and breathing while a creature prepares for his next meal.  Oh, wait, it’s just mom telling the young boy that breakfast is ready (worms, yum!).  The sky is strange when the boy walks outside, and soon he finds a live Uzu Uzu, or frog.  The problem is that the boy lives in a zombie world, and this sort of thing is forbidden.  He has to enlist the help of three friends to try to escape the zombie police.  Good stuff, lots of fun animation, and the opening is awesome.  3.5/5

Doorbell (directed by Yoji Fukuyama) – It is another busy day. People are waiting for the bridge to clear so they can walk across.  A small girl watches a young man from across the way.  Suddenly the young man splits into two exact copies before her very eyes.  The boy keeps walking but soon he realizes what has happened to him.  The problem is that it’s more than one copy, and he has to keep these duplicates from ruining his life.  This to me is not effective at all.  It is boring, drawn out, and didn’t really have a great conclusion.  Avoid.  1/5

Limit Cycle (directed by Hideki Futamura) – What the heck am I watching?  Apparently it’s an employee of some sort who is caught up in the rut of every day life.  So therefore, he makes a 15-20 minute monologue about his view of the world.  It is heavy on religion and way out there on existentialism.  A little bit on sex, too, so this one is not for minors.  Basically once it ends, you realize these are minutes you will never get back.  If I could give it a zero, I would.  1/5

Happy Machine (directed by Masaaki Yuasa) – A baby is staring at a mobile and realizes life is good as he sits in her arms.  However, when his mother leaves and he runs after her, he comes to the thought that the outside world is a scary place indeed and that his nursery might be a fabrication.  I get what it’s aiming at, but this is only marginally better than the previous two.  1.5/5

Baby Blue (directed by Shinichiro Watanabe) – A kid draws on his desk and plays piano in the music room.  He then goes outside and asks a long-time female friend if she wants to cut class.  She agrees, and they decide to go to Shonan Beach.  However, once the boy reveals his secret, the trip takes on a quite different meaning.  The best short in this entire disc.  Beautiful, bittersweet, and capable of stirring a lot of emotion, especially from this writer.  Almost makes me forgive the previous three shorts, but not surprising from the creator of Cowboy Bebop.  5/5

Gala (directed by Mahiro Maeda) – A massive object hits the village, and there is destruction everywhere.  At the same time, a boy wakes up from his sleep.  He runs to see the meteor, and as the village people start to pound on the object, he soon realizes that he is linked to whatever this thing he is.  He must make sure that it reaches its full potential.  Nicely done. I like reveal at the end, as it were.  A little heavy on the music, but it’s a lot of fun.  4/5

Moondrive (directed by Kazuto Nakazawa) – A group of violent criminals find an old map that leads to treasure on Giant’s Island.  Of course, when they get there, they find out that things are not as they seem.  This is done in pseudo-comic-book style, and their interactions with other people in order to get information about the map or Giant’s Island are quite alarming, we’ll say.  I wouldn’t want to spoil it, but it does involve the dame of the group.  Not for the kiddies either, but very funny and full of madcap humor.  4.5/5

Wanwa the Doggy (directed by Shinya Ohira) – Kid pretends to be an ogre to his mother who is in the hospital for an extended stay.  However, those pretend actions soon turn into real fears as he runs from a real ogre in a dream world.  Starts off nicely but kinda fails in the execution of the overall plot.  Not as bad as some of the ones in the first Genius Party, but not particularly memorable either.  2/5

Toujin Kit (directed by Tatsuyuki Tanaka) – A girl brushes her teeth in a dingy bathroom.  It’s a hard existence for her as she lives down a dark corridor off a train’s beaten path.  She spends her time placing alien life forms inside stuffed animals as they come to life (sometimes).  Unfortunately, this sort of behavior is illegal, and the authorities are right around the corner.  Love the look of this one, and the story is thrilling enough, but it simply runs out of room and tries to wrap it up, oh, not so neatly.  This could be a feature film, but simply gets squandered here.  3/5

Dimension Bomb (directed by Koji Morimoto) – Our final short takes on a strange path as a sorceress summons a demon boy from another dimension, but once he gets there, his destination changes to one of uncertainty.  I think.  I’m not entirely sure of the overall premise, but the surround sounds are darn near reference and will give your speakers a workout.  Too bad the plot is a muddled mess, and you are just happy that it is over when the credits roll.  1.5/5

Wow, this is a mixed bag.  We go from OKto awful to amazing all in the first Genius Party, and unfortunately it’s a pretty similar situation in the follow-up.  The styles are interesting, but the reliance on making some kind of visual masterpiece rather than a thoughtful and interesting story shows up more often than not.  For every Baby Blue or Moondrive or  even Deathtic 4, there is a Doorbell, Dimension Bomb, or the ridiculous Limit Cycle.  It never finds its footing long enough to make for an enjoyable show.

The film is shown in a 1.77:1 widescreen format.  The variety of styles make this difficult to judge as some are aiming for a certain look and its not always to have the most colors in its palette.  Gala looks fantastic; so does Toujin Kit and others.  But the same can’t be said for Wanwa the Doggy or Deathtric 4.  The other thing one has to consider is that this is three hours of video and audio stuffed onto one disc.  It is a BD-50, but quality is going to suffer due to compression.

The audio tracks are  DTS HD 5.1 in Japanese.  Subtitles are provided in English, but about half of the shorts don’t need them because they are more visual than anything else.  Sound fares better than video, and you do get some surround moments, especially in Dimension Bomb.  Dialog is OK; it is clear and easy to hear most of the time, but sometimes it does sound a bit far away for some reason.  Environment sounds are largely nonexistent, but I would not expect it from a bucketful of shorts either.

No Special Features are provided on the disc anywhere, which is a true miss in my opinion.  A documentary or commentary with a knowledgeable expert could have gone a very long way.

It took roughly eleven years for this to show up on our shores in Blu-ray format (it did get to the UK in 2017), and there is reason to celebrate when anything is accessible for another generation of viewers finding this for the first time.  There are truly some great shorts in this package, as I have highlighted above.  But there are also really dismal shorts where I feel they were more interested in the visual presentation or the message they were trying to convey.

Video presentation is good, but I do feel stuffing this on one disc was a mistake of sorts.  What’s worse is that there is no supplemental material to teach you anything about how these shorts came to be.  If it had been separated on two discs and then used the extra space to flesh out some meaningful extras, then I would have been much happier with the finished product.  Fans of these directors might want to seek this disc out as a curiosity, but nothing more.  Enjoy.

Michael Durr has been reviewing movies for the better part of fifteen years now. He primarily enjoys thrillers, sci-fi, animation and even a little courtroom drama. His favorite films include Escape from New York, the Goonies and anything with Alyssa Milano. When he’s not praising Kurt Russell as the greatest actor of our time or scratching his head over a David Lynch flick, he’s spending time at home in Texas with his lovely wife, Lori and his amazing son. How they put up with him is a mystery, but even Basil Rathbone doesn’t have the time to solve that one.
Stuber (UHD Blu-ray) (4K) Vikings: Season 5 Volume 2 (Blu-ray)