A Beautiful Day In The Neighborhood (UHD Blu-ray) (4K)

Posted in: Disc Reviews by Gino Sassani on February 18th, 2020 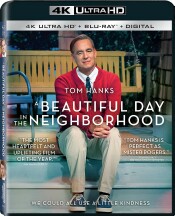 Anyone who was a kid from the 1960’s to the 1990’s and beyond recognizes Mr. Rogers and his neighbor song. The man defined children’s programming for television, and he did so from a small studio tucked away in Pittsburg, Pennsylvania for almost 40 years. There aren’t many people living in this country who don’t at least know who Fred Rogers was. It would be a complete waste of my space and your time to tell you very much about the man in these lines. Truthfully, you’ll make the kinds of discoveries into the nature of who he was by spending a short 90 minutes watching the documentary Won’t You Be My Neighbor that appeared last year. It will be time well spent no matter how little or much you think you know about him. But now hot on the heels of that incredible documentary comes a film staring Tom Hanks as the lovable neighbor we all used to wish we had. Recently Ancestry.com confirmed that Tom Hanks and Fred Rogers are related. Of course you have to go back the pre-revolutionary days of 1734 to find this elusive relative. But you won’t have to time travel to spend a magical time with Mr. Rogers and Tom Hanks. In 2019, they happen to be the same man.

Lloyd Vogel is played by Matthew Rhys. I have loved his work in The Americans recently, and it’s a treat to see him in such a prominent feature film role. He is a reporter for Esquire magazine. He’s a cynical kind of guy who always finds a way to turn even the nicest situations into an expose. When the magazine decides to profile some heroes, he is given the job of writing a small blurb on Fred Rogers. He isn’t too happy about it, but his editor tells him that Rogers is the only one on the list who was willing to talk to him. His reputation has become something of an albatross. It’s a bad time for Lloyd. His sister is getting married, something he calls an annual event, and he encounters a father for whom he holds a lot of rage and bitterness. They get into a fight, and Lloyd is about to meet Fred Rogers with a bruised nose.

When Lloyd arrives at the studio where the show Mr. Rogers’ Neighborhood is filming, he a bit fascinated by the process. Rogers approaches him with complete kindness and warmth. The rest of the staff feel protective of their star and aren’t quite so welcoming. Rogers notices his nose and won’t buy his story that it was a close play at the plate while playing baseball. The fact that it’s winter might have helped give him away. The two end up meeting several times, but in each instance Rogers manages to turn things around and asks the questions, often about his relationship with his father and other heartaches he might be experiencing. The interviews frustrate Lloyd, who believes there’s something else under that calm and forgiving façade, and he tries to quit the process. But Rogers pursues him with an almost obsessive desire to help him.

The two end up friends after Rogers shows up while Lloyd’s father is dying with the family gathered at his home. He ends up writing more than his blurb and gets the magazine’s cover story.

I’ve heard interviews with the real journalist who claims Rogers literally turned his life around. The reporter’s real name is Tom Junod, and I’m not certain why his name had been changed.

The film goes about telling its story in a clever and unusual way. It starts out with the introduction of a typical Mister Rogers’ Neighborhood episode. Hanks strolls in and sings the song while changing into the iconic sweater and sneakers. He introduces Lloyd as a photograph on a board of doors, and from there on each segment or act of the film starts as if it were part of an episode. Transition scenes don’t use the usual transition shots of a city or building. Instead they’re all models that appear in the same artistic style of the show itself including little model airplanes landing and taking off as Lloyd keeps going back and forth between New York and Pittsburgh. I thought I would find that distracting, but far from it; it was quite endearing and really kept the perfect mood for the film.

The two actors share some awkward chemistry that grows over time. Both Tom Hanks and Matthew Rhys are perfectly placed in their respective roles. It might well be my favorite performance from both accomplished actors. The dance that occurs between them throughout the show is so simple, but it conveys such complicated emotions and ideas that it really does become a kind of “lost” episode of the show delivering lessons when you didn’t even know you were learning.

Fred Rogers’ widow Joanne Rogers makes a cameo and was involved in the production, and she’s very happy with the film. Before the film started, our press screening was treated to an introduction by her, and she told us how happy Fred would have been that Tom Hanks was playing him. I can understand her happiness, because this really was an extended episode of the show.

A Beautiful Day In The Neighborhood  is presented in its original dual aspect ratios of 1.85:1. and full-frame 1.33:1. The ultra-high-definition 2160p  image is arrived at by an HEVC codec with an impressive average bitrate of 55-60 mbps. The image is as it was in the IMAX format. Most of the film sports the widescreen format, but scenes that exist within the Mr. Rogers show itself are appropriately full frame, because that’s how the show was originally shot. The shifting aspect ratios are not distracting and work quite naturally as a signal for when we’re in Rogers’ world and the real world. There’s such room for detail here. The puppets are not the originals, but recreations that were painstakingly made to look exactly as they do and did. The camera isn’t afraid to go in close where the fabric’s texture and even wear are wonderful details. Colors are pretty natural, if a little more subdued, in the real world. In the Rogers world they are bright. His red sweater and some of the colorful aspects of his puppet world stand out vividly. Black levels are fine and present some nice shadow definition. The image is so sharp that the “flaws” of the models comes through quite clearly, but believe it or not, that was intentional. There was such an effort to reproduce an experience from a small, low-budget production that it is as much the show’s lingering charm and experience.

The DTS:X MA track defaults to a pretty solid 7.1 mix. This release also supports up to a 12.1 surround mix, but I reviewed it at 7.1. The first thing that jumps out immediately is how strong and clean the sub levels are in the music. The tones of a stand-up bass fill the room with incredible power, yet it’s so sharp and clear. I haven’t heard a musical mix like this before. Nice that it comes in such a simple arrangement. The music highlights many aspects of the audio presentation. There’s a lot of that distinctive piano and glockenspiel. The sound effects inside the studio are so magical and spot on it will easily transport you back to the days you watched the show as a kid. If you’re too young to remember the show, I can assure you that you are getting a very true representation of what that world was like. Dialog cuts through it all. This is actually a very simple audio presentation that becomes bigger because of the places that it transports you.

Blooper Reel: (1:38) The entire blooper reel is dedicated to the problems Hanks had in the opening scene trying to sing and zip the red sweater.

Tom Hanks As Mr. Rogers: (10:29) Hanks was wonderful in the role, and his performance was less an imitation as it was a channeling of Fred Rogers. This feature looks at his prep and how he was made to look as close as possible without any prosthetics. Cast and crew talk about him embracing the part with a lot of behind-the-scenes footage. There are some really kind words from Fred Rogers’ widow, Joanne.

The People Who Make A Neighborhood – The Making Of: (15:23) Hanks sets this up in character of Fred Rogers to introduce us to the people who made the film through a “Picture/Picture” presentation. Actually it’s mostly the cast including a behind-the-scenes look at the Chinese restaurant scene that was filled with people who were actually a part of the original show, including Rogers’ widow Joanne.

Dreaming Big, Building Small – The Puppets & The Miniatures: (8:37) Go behind the scenes where the models and puppets were created, and meet the people who brought all of that to life.

Daniel Tiger Explains Practice Makes Perfect: (2:42) The puppet takes us on a behind-the-scenes look at Hanks’ struggles zipping that sweater.

Finally, you might be disappointed if you are a huge Fred Rogers fan. He’s not the main character of the film. The focus is really on the Lloyd Vogel character, and Fred is very much a supporting role in the movie. Some might not like the idea, but let’s face it; Lloyd’s story is the one of change and enlightenment. He’s the character who has things to learn, and he’s the character who is on a journey. Fred Rogers is Fred Rogers as a character. His presence creates that change, but Fred’s not going anywhere. Fans need to understand why the dynamic sets the focus. If you look past such petty things as screen time or whose story is actually being told, you’ll agree the film does nothing but reveal Fred Rogers as the hero of someone else’s story. You can understand that, right? “I knew you could.”

Gino Sassani is a member of the Southeastern Film Critic's Association (SEFCA). He is a film and television critic based in Tampa, Florida. He's also the Senior Editor here at Upcomingdiscs. Gino started reviewing films in the early 1990's as a segment of his local television show Focus. He's an award-winning recording artist for Omega Records. Gino is currently working on his 8th album Merchants & Mercenaries. Gino took over Upcomingdiscs Dec 1, 2008. He works out of a home theater he calls The Reel World. Favorite films: The Godfather, The Godfather Part II, The Body Snatcher (Val Lewton film with Karloff and Lugosi, not the pod people film), Unforgiven, Gladiator, The Lion King, Jaws, Son Of Frankenstein, The Good, The Bad And The Ugly, and Monsters, Inc.
The Hunt for Red October: Collector’s Edition Steelbook (UHD Blu-ray) (4K) Cicada Song