Posted in: Disc Reviews by Jeremy Butler on February 20th, 2020 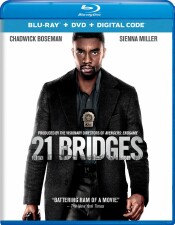 “We got twenty-one bridges in and out of Manhattan. Shut them down. Three rivers. Close them. Four tunnels. Block them. Stop every train and loop the subways. Then, we flood the island with blue.”

Chadwick Boseman looks to be trying to bring back the days of Dirty Harry in this film as a cop known to kill cop killers. 21 Bridges is an action-packed film where nothing is really what it seems. Also featuring Sienna Miller, Taylor Kitsch, J.K. Simmons, and Keith David, I have to admit that some of these cast members’ appearances were more like cameos, as the action primarily focused on Boseman as he attempted to hunt down his target by any means necessary. Sorry, I just always wanted to say that, but for the context of this movie it rings true, as from the quote above, you can see the extent he was willing to go to.

Following the death of his father at the hands of three assailants, two of whom he took to the grave with him, Andre Davis has dedicated his life to protecting and serving. As a NYPD detective, he has amassed a reputation from line-of-duty shootings (eight in his nine years on the force). This reputation prompts his superiors to enlist his help in solving a crime very personal to the boys in blue. During an attempted robbery, more than half a dozen cops fall victim to the robbers, who flee the scene with kilos of cocaine.

The assailants, two trained soldiers (Kitsch and If Beale Street Could Talk’s Stephan James) stumble onto the score of a lifetime, a stash house with more product than they could ever carry. Upon making their exit, they are set upon by the cops, and one thing leads to another. Now on the run and in a dire need to turn their score in to cash, these two killers find themselves in over their heads. Knowing that it is only a matter of time before the killers flee the city, Davis makes the boldest call of his career: a full police lockdown around the island of Manhattan.

The film wastes no time establishing Boseman’s character as a bona fide tough guy as we are introduced to him during an Internal Affairs interview following his most recent shooting. The manner in which Boseman conducts himself during this interview sets the tone for his character for the rest of the movie in my opinion. The key takeaway is that despite his reputation, he is not a hothead, and contrary to popular belief, he is not quick to pull a trigger. Granted he is called that very thing at one point in the movie, but as he said, “you better have diction calling him a trigger.” In fact, he is quite possibly the most levelheaded person of the cast and the first to realize that there is something else going on besides the cop massacre.

On the other side of the coin is James’ character, who embodies the definition of being in over his head. As far as he is concerned, this should have been an easy job. To his credit, despite being far out on a limb and having police literally breathing down his neck, he still is able to remain levelheaded enough to come up with a plan that conceivably could have worked if it had not been for the larger conspiracy at work. There is also a humanizing element to his character; as a member of the supporting cast said it best, “He could have been anything that he wanted to be, if he’d only been born somewhere else.” That assessment of the character emphasized that Boseman’s and James’ characters were both halves of the same coin, both determined by their circumstances. This made for a great dynamic during the characters’ interactions.

The film also hosts a bit of a Marvel reunion, as three members of the cast have past affiliation with the franchise. We all know the obvious one with Boseman, but Kitsch was also affiliated via his subpar portrayal of Gambit in the Wolverine origin story, and who could forget Simmons appearance as JJ Jameson in the Maguire Spiderman, not to mention his recent reprisal in the latest Holland version (sorry if that is a spoiler alert, although I’m not that sorry, as you’ve had plenty of time to see the film). Back on the subject of this film, I will say that David’s appearance was unnecessary, as his role was damn near a non-speaking role; it just felt wasteful to put him in the film for such a minimal amount of time.

21 Bridges is presented in its original aspect ratio of 2.39:1. The 1080p image is arrived at with an AVC MPEG-4 codec at an average 30-35 mbps. The high-definition image presentation is exactly what was called for here. It’s a bit gritty. It plays out almost entirely out on the streets at night, so this is really a story about contrast, black levels, and lighting. The black levels are average, and the sometimes-harsh street and car lights are where you’re going to find your best bet for shadow definition. Contrast is better because of the abundant use of source lighting and fast-moving action. Details are better in close-up shots, likely because of how fast the action is usually moving.

The DTS-HD Master Audio 5.1 is somewhat disappointing. There’s plenty of nice surround effects. With so much shooting, sirens wailing, and general street carnage, there is plenty to supply you with some nice ear candy. But it’s not enough to completely immerse you in the action. Subs are pretty weak with little to make the audio presentation feel full and vibrant. Dialog comes through fine, and perhaps the only truly dynamic material comes from the at times pounding score.

In many ways this film is a modern and African American version of Dirty Harry. The film sets that up right at the beginning when he is in front of an internal affairs grilling for shooting too many people. I half expected him to reply: “There’s nothing wrong with a lot of shooting so long as the right people get shot.” In fact, Harry also had to go after dirty cops in one of the films. It will be interesting to see if we have a franchise brewing here.

Jeremy Butler is a film school graduate of the International Academy of Design and Technology. He is been writing for Upcomingdiscs since 2012; however, movies have played a big part of his life for much longer. Favorite genres include horror, science fiction/fantasy, and comedy. Favorite movies are V for Vendetta, Boondocks Saints, Kiss Kiss Bang Bang, and The Godfather.
The Twilight Zone (2019): Season One (Blu-ray) Shutter Island: 10th Anniversary Steelbook (UHD Blu-ray) (4K)