Posted in: Disc Reviews by Brent Lorentson on April 14th, 2020 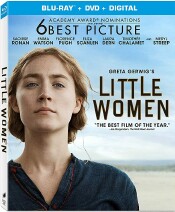 The 19th century novel penned by Louisa May Alcott has been adapted in numerous forms  since it was first published. Personally the 1994 film is my favorite, but this new film from Greta Gerwig is  a welcomed adaption that shows that  Gerwig is a talented force to keep an eye on.  Little Women is one of those stories that have entertained me over the years, despite it being a story that appeals to a radically different demographic.  Even in my teens when I first discovered the story, when I was obsessed with horror films and reading the newest King novel, when I was required to read the story for class, what started as a reluctant task I was doing for a grade, by the time I finished the book and watched the 1994 film in class, well, I found myself smitten with the March family. I was a bit cynical when it came to this new film. Even with it getting all the critical attention I was still hesitant. Really, if it wasn’t for the quarantine, I’m not sure if I ever would have given this film a chance. Despite my reluctance, I’m glad this film found its way into my hands. The most noticeable change that Gerwig has made to the film is by telling the story in a nonlinear fashion.  For those who are not familiar with the story, this won’t be much of a problem, but in some ways I feel this kind of cheats the story out of some of its emotional moments, both good and bad.  In deciding to tell the story this way, I do appreciate how Gerwig went ahead and gave the film  a visual style to help the audience tell what is a flashback as compared to a more current moment.  The moments where Jo (Saoirse Ronan) seems to be looking back, there is warmth in the visuals.  With Jo taking the front-and-center role as she struggles with being a writer while juggling her relationship with her family, there are moments where we have to question how reliable she is with her dreams and memories.  One of these moments that stands out involves her sister Beth (Eliza Scanlen) as she struggles with scarlet fever.

Let me just get out of the way that in my eyes Winona Ryder in the 1994 Little Women is the perfect Jo, but Saoirse Ronan does an admirable job with how she handles the role while injecting a bit of a modern twist on the character.  Honestly, all the ladies in the cast gave wonderful performances while making the characters uniquely their own, but the performance I didn’t see coming was from Florence Pugh, who is simply captivating as Amy.  2019 was a pretty good year for Pugh between Midsommer and having Fighting With My Family, but it’s her performance in Little Women that made it clear this woman is a star in the making (we’ll be seeing her again soon in Black Widow). As for Emma Watson, it should come as no surprise that she is enchanting as Meg.  Gerwig did a great job with casting the March sisters; the chemistry between them is one of the crucial pieces she got right.  If anything, my only major complaint with the casting is Timothee Chalamet as Laurie.  This is all a matter of preference, and though I understand how Laurie and Jo are very similar to the point where they even wear the same clothes, he’s almost too feminine, and it makes his transition later in the film feel more forced than something done out of genuine emotion.  In previous films we’ve seen the character simply transition from a boy to a man, and in this version we just don’t see that.  Really, all the male characters are anecdotal at best, which is fine, because it allows for more attention to be placed on the sisters.

In this version of the film we get more emphasis on Amy wanting to be a professional artist while feeling she lives in the shadow of her sister Jo.  Jo, on the other hand, is struggling to be a writer, though the only stories she’s able to sell are pulpy rags that are a far cry from what she really aspires to be.  The dynamic between the sisters and how they both go about attempting to achieve their dreams is well done, but it’s the injection of Laurie coming between the two sisters where the story gets a little shaky.  The biggest payoff with the film comes with the film’s opening and closing moments that really do help the film stand apart from the pack.

Greta Gerwig, on the other hand, has managed to impress me and has me excited for what she’ll be bringing to the screen next.  While I’m not in love with the film, on a technical level she has upped her game since Lady Bird. This film is bigger in so many ways, and she does a hell of a job at delivering something that’s beautifully shot and is filled with a lot of heart, BUT sadly it’s something we’ve seen before.   Honestly, I feel Gerwig could be the best female director out there, and she’s got an impressive career ahead of her.

Little Women is presented in the aspect ratio 1.85:1.  The 1080p image is arrived at with an AVC MPEG-4 codec at an average of 25 mbps.  Because the movie was shot on film, there is liveliness in every shot that digital hasn’t quite been able to capture.  There are two timelines for the audience to follow. One is colder and with a blue hue to distinguish present day for Jo; then as the film flashes back, the hue is warmer.  The detail in the costumes and with the sets is captured beautifully.  One of my favorite scenes is of Amy with Laurie in her art studio. Everything from the set design to the costumes and the cinematography comes together beautifully, and the detail of all her artwork hung around the room is just a glimpse to the attention to detail.

The DTS HD-Master Audio 5.1 track is one that is subtle but definitely has moments where it shines.  One of the highlights involves a sequence where is Amy is following after Jo and there is an accident that occurs. The way rear speakers are used do a great job at giving a sense of distance with the characters.  While the score is rapturous at times, this isn’t one I would dare to call very memorable, though it does have its moments, like when Jo sells her first story.  The dialog comes through nicely and clear, which is impressive considering the numerous scenes where characters are talking over one another.

A New Generation of  Little Women: (12:52) This is a collection of interviews with some BTS footage with the cast and crew discussing this current adaption of the film.

Making a Modern Classic: (9:02) This delves into Gerwig’s adaption and making it seem more modern while staying true to the period.

Greta Gerwig: Women Making Art: (9:22) Here we get more about Gerwig’s motivation for doing the film and why it matters to her as she is becoming a more seasoned filmmaker.

Hair & Make-up Test: (2:58) A collection of scenes where we see them testing out the hair and makeup, but it also almost looks like B-roll footage.

Little Women Behind the Scenes: (3:25) This feels more like a promotional piece with the cast and crew discussing the film.

Orchard House, Home of Louisa May Alcott: (10:07) This is really the best feature that discusses the home where the author grew up and the homes history over the years.

This is a tough one for me. On the technical side this is the best adaption of the film we’ve seen, and there is a lot to appreciate about the film, but I really didn’t care for the nonlinear storytelling.  The book was released in two parts, basically Book 1 with them being young girls and Book 2 with them eight years older into womanhood.  I feel changing the timeline cheats the viewer out of some emotional moments, but it’s all about preference.  This is still a beautifully shot film, and seeing these young women perform together on screen is definitely a treat.

Brent Lorentson is a horror writer and film critic based out of Tampa, Florida. With a BA in Digital Film, he co-wrote and co-directed Scavenger Hunt. His short stories have appeared in various horror anthologies. In 2019 his short script Fertile Blood will be a part of the anthology horror film Slumber Party. He is currently working on his first novel A Dark and Secret Place set to be released in late 2019. Favorite Films: Taxi Driver, Fight Club, I Saw the Devil, The Wild Bunch, Dawn of the Dead, A Clockwork Orange, Pulp Fiction, Heathers, The Monster Squad, and High Fidelity.
Star Wars: Rise Of Skywalker (UHD Blu-ray) (4K) Dolittle (2020) (UHD Blu-ray) (4K)