Posted in: Disc Reviews by Michael Durr on June 1st, 2021 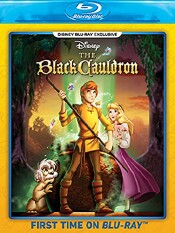 When I was in grade school, I remember reading High King, the fifth book in the Prydain Chronicles, as part of a reading assignment (since it was a Newbery Award winner).  I also at some point watched Black Cauldron in my youth, but I’m pretty sure it was on a crummy VHS tape.  Anyhow, many years later, with an old friend, I was gifted a treasured copy of Prydain Chronicles (all five books in a hardback format).  Being much older, I took the time to read the entire hardback collection, and ever since then I’ve been tracking down related items including the Black Cauldron movie from Disney to revisit.  It might not be the wonderful series of books, but it’s still an excellent movie on its own accord.  Let’s explore the recent release from the Disney Movie Club.

In the mystic land of Prydain, there was once a king so evil and cruel that even the gods feared him.  He was imprisoned in a crucible of molten iron since no prison could hold him.   His demonic spirit was harnessed in the form of a great black cauldron.  That Black Cauldron lay hidden while evil men tried to find it.  The one man who did would be able to harness a power to resurrect an evil army which would then rule the world.

Let’s cue the title screen.  We return to see Dallben (voiced by Freddie Jones) going on and on about the Horned King and the evil that he might do.  However, it should be pointed out that the house cat wants breakfast.  Where is that Taran?  Oh, there he is (voiced by Grant Bardsley), staring out the window while the pot with breakfast is cooking.  He talks about how he wishes that we was fighting in the war and how he wants to be a hero.  But first, this assistant pig keeper needs to feed the breakfast to Hen Wen, the little piggy.

But all this assistant Pig Keeper needs is a chance as he prances around with a stick taking care of the barn animals — I mean the evil Horned King and his deadly associates.  Unfortunately, in this fit of make believe, he pushes a goat too far and takes a shove for his troubles.  Taran goes back to cleaning Hen Wen, and suddenly the pig becomes distraught.  As the scared pig begins to squeal uncontrollably, Dallben tells Taran to take the curious pig inside.

Hen Wen is actually a very special pig.  He’s an oracle, and his magic soon reveals itself in a pool of water.  The Horned King appears in the water, and he is searching for the Black Cauldron.  Dallben tells Taran that he must leave at once and go to the hidden cottage at the edge of the Forbidden Forest.  There he must hide until Dallben comes for the boy and the pig.  Taran sets off for the thrill of adventure with his swine companion.  Somewhere, the Horned King plots his next move.

As we soon learn, Taran is something of a foolish boy and spends most of his time getting in trouble and then trying to find his way out of it.  Along the way he meets all sorts of companions such as Princess Eilonwy (voiced by Susan Sheridan), Gurgi (voiced by John Byner who also does the voice of Doli, one of the Fair Folk), and Fflewddur Fflam (don’t say that five times fast) (voiced by Nigel Hawthorne).  It’s one of those movies where it is easier to like the supporting cast more than the main lead, as they help to carry the film.

John Hurt does a wonderful rendition of the Horned King and gives a lot of weight to his evil presence as probably one of the most terrifying evil characters in Disney’s history.  I mean, he’s right up there with the heavyweights and does not have any quirks to laugh at, either.  Straight up evil.  This was a departure from other Disney animated films where you would have a bad guy, but you could still chuckle about them at the end of the day.  See, Cruella, Gaston, even Scar, all have very little on the Horned King, who chills you to the bone.

The film itself isn’t for the little kids, even though characters like Fflam and Gurgi do their best to interject a little humor at the end of the day.  Throw in a couple of boob jokes, and it isn’t exactly the most wholesome thing Disney probably ever put out.  However, that aside, it was very different from Sword of the Stone or Robin Hood (in the Disney fantasy genre), and that really set it apart despite the fact that probably most people especially those connected with their animation studios would do their best to forget this film.  Is it a complete departure from the book series?  Yes.  Is it still a good animated film?  Absolutely yes.

This movie is presented in a 2.35:1 widescreen format.  This film is sourced from the same 4K master that has made its way to Disney+ and various other streaming services.  The colors are well represented and hold true with all of the grain intact.  Flesh tones are spot-on, and the Horned King or the witches are a delight to look at.  The presentation is brilliant, and I compared it to my copy on Vudu (in UHD), and it’s about the same with only maybe a tiny twinge of sharpness and improvements.  It feels rich, it feels inviting and can be favorably compared to other Disney films of the time period such as The Great Mouse Detective or Fox and the Hound (both of which have wide Blu-ray releases).    Outside of a true 4K release (which we will probably never see), I don’t think we can expect this one in any better condition.

The sound to this film is presented in both DTS HD 5.1 Master Audio in English.  The sound has improved considerably from my old 25th anniversary DVD.  It has a lot more volume, and there is actually some evidence of a surround presentation in many of the film’s crucial scenes.  Dialog is problem-free, and nobody should have any trouble with the conversations between the characters.  The film also has English SDH subtitles (and they actually show up in both extras too) in which I could find no issues with anything on the screen.  It’s about dead-on the same as the 4K streaming release and should delight listeners looking for an authentic experience.

Notes: For the CD soundtrack seekers out there, this one is a toughie.  It was originally put out by Varese Sarabande in 1985 and then again in 2017 as a limited edition re-release.  The re-release might run you a little cheaper, say $40 rather than the original, which is about $50 or so.  There is also an edition from 2012 that Walt Disney put out that’s much more comprehensive but also way more expensive and harder to find.  It’s a rough go either way.

Deleted Scene: The Fairfolk 9:50:  This is more of an alternate scene as it changes how the Fairfolk operate and are a little less trusting of our protagonists than what the film presents them to be.  The deleted scene is in various stages of production with sketches, stills, partially animated, and so forth.  I really liked this, I just wish there was more of it.

Short: Trick or Treat Starring Donald Duck and his 3 Nephews 8:13: A very funny short involving a very mean Donald Duck, who is trying to pull pranks on his three nephews during Halloween.  However, the boys are able to enlist the help of Witch Hazel and stick it to the duck.  The only issue I have with it is that the Donald Duck short, Chips Ahoy, was the one that ran with the film and should have been included here.  I’m glad I can get any sort of old Disney cartoons with these discs, but I just wish it was the right one, if that makes sense.

Notes: Currently this is only available through the Disney Movie Club. If you want a copy, basically you have three options.  1)Join the club (be sure to check for promo codes), order the disc, enjoy.  2)Find someone who already is a part of the club and then get them to order it for you.  Or 3)Aggressively stalk 3rd party sellers whether it’s Ebay, Amazon, Facebook, or Disc Forums, and try your luck with someone wishing to get rid of it.  Basically, I worked my copy through option #2.  I’m not a fan of joining anything with an obligation, but I will say there are quite a few exclusives, and if you are willing to work the system, you can get some underappreciated classics in Blu-ray.

The box office, as many are probably aware, was not kind to Black Cauldron.  It had an overblown budget and didn’t make anywhere close to its money back.  It was dubbed as the film that almost killed the Disney Animation Studio, which honestly is a gross over dramatization (trust me, one film is not going to kill a studio that lives and breathes kids’ films).  It just didn’t perform, mostly due in part because it was completely different than just about everything else that Walt Disney did at that point when it came to cartoons.  It really is a shame, since Pixar, a division of Disney 30-40 years later, now regularly breaks the rules of what an animated short or film should be and is applauded for it.  I often wonder whether if we were given about 20 minutes more what this movie would have been, and just maybe it wouldn’t have been a colossal failure as most people judge it to be.

The disc is as good as you can hope for given that the Disney Movie Club doesn’t really get into anything beyond the fact that it is an exclusive and we all better be happy that it even exists in the first place.  I own probably half a dozen DMC discs at this point, and I honestly expected none of them to ever get a Blu-ray release.  That aside, the video and audio are both excellent and give the 4K release found on Disney+ (or any other Movies Anywhere compatible streaming site) a run for its money.  The extras are nothing special, but at least we get something (though I still think they should include the original Donald Duck short that ran with the film during its initial theatrical run).  It’s an excellent film if you can judge based on its own merit (and not the amazing book series that it spawned from), and I do recommend this to any fantasy lover, especially those who grew up in the 70’s and 80’s.  Find a friend, join the club, try to stay away from Ebay, but obtain this movie on Blu-ray soon before it disappears. (We know how Disney loves to vault these films.)  Enjoy.

Michael Durr has been reviewing movies for the better part of fifteen years now. He primarily enjoys thrillers, sci-fi, animation and even a little courtroom drama. His favorite films include Escape from New York, the Goonies and anything with Alyssa Milano. When he’s not praising Kurt Russell as the greatest actor of our time or scratching his head over a David Lynch flick, he’s spending time at home in Texas with his lovely wife, Lori and his amazing son. How they put up with him is a mystery, but even Basil Rathbone doesn’t have the time to solve that one.
Supernatural: The Fifteenth and Final Season (Blu-ray) Super 8 (Blu-ray UHD) (4K)