Posted in: Disc Reviews by Gino Sassani on October 2nd, 2021 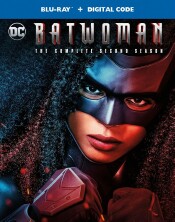 “There’s a war coming to Gotham, and now there’s no Batwoman stop it.”

Well … that’s halfway true. After just one season in the cape and cowl, Ruby Rose rather abruptly quit the show. That’s a pretty big red flag when you lose your titular star and character after just one season. For many shows that might have been the end of the road. Not true for Batwoman. They had several choices. They could have recast the part and just pretend it’s the same character with a new look. They could have killed the character off and found a new one to replace her. Of course, with the multiverse now closed down, the most likely option of replacing her with another Earth’s Kate Kane might have been the best option. The announcement came pretty much on the heel of Rose’s departure that they would not recast the part. That turned out to be partially true, but more on that later. The choice was made to put an entirely new character into the suit.

“That suit. It’s one thing to put it on and other thing to wear it.”

Enter Ryan Wilder, played by Jevicia Leslie. She took the rap for a friend and ended up serving 18 months in prison for drug possession. Her foster mother was killed by some bad guys who never paid for the crime. Needless to say she is carrying a lot of angst. Now she can’t find a job or a place to live. She’s homeless and living out of her van. She watches a ball of fire which turns out to be a plane crashing out of the sky. It hits near her van, and when she explores the wreckage, she finds the batsuit. Of course, she puts it on and gets quite a kick out of the things she can do. She soon realizes the suit can help her get some revenge on the bad guys and starts kicking some butt. Naturally the bat team of Luke Fox (Johnson) and Mary (Kang) have tracers in the suit and end up tracking her down. She’s brought to the Batcave, where she learns about Kate Kane, who was likely in that plane crash and dead. She doesn’t want to give up the suit, and after a series of back-and-forth events she ends up mortally wounded by a kryptonite bullet.

You see, Tommy Elliott (Christie) has teamed up with Alice (Skarsten), and she’s given him one of her special sewn face jobs, and he looks like Bruce Wayne. He’s after both the Kryptonite bullet and the new Batmobile. He convinces even Luke and Mary that he is indeed Bruce finally returned home. While he doesn’t get to play long before he’s discovered, it was long enough to shoot Ryan when she’s in the suit.

It is fortunate for any chance the series has to ever establish itself that Alice continues to be a huge presence in the second season. She’s on a bit of a revenge mission to take down a character named Queen Safiyah Sohail, played marvelously by Shivaani Ghai. She runs a mystic island where Alice was once a guest during the years she was missing. There she fell under the spell of the Queen until she met her adopted brother Ocean, played by Nathan Owens. They fell in love, and this pissed off the Queen, who wiped their memories of each other. The Queen is a very close villain to the more iconic Ra’s Al Ghul. They both lord over a skillfully trained league of assassins. They both have mythology steeped in Mideastern philosophy and live in a secluded place. Ghul has his resurrection waters, while the Queen protects a rose that can cure pretty much everything. You might see where this is going. Alice is fighting a grudge against a woman with an all-healing flower, and Ryan has a wound that can’t be healed.

Much of the first half of the season explores this odd dynamic with a couple of quick bad guys thrown in to keep it interesting. One of those deserved a much larger stake. We get to meet the master killer for hire, Mr. Zsasz, played by Alex Morf. This is a compelling character and performance that is wasted with just over a single episode. This guy should have gotten a bigger piece of the big bad pie.

Throughout the episode there is a new drug making the rounds of Gotham City. It’s called Snake Bite, because it’s a device with two needles. Ouch. It’s mixed with Scarecrow’s fear gas and causes you to be able to hallucinate someone or someplace in your past. The bite even gets its grip on Commander Kane. The group behind the new drug is called the False Face Society because they all wear masks. Not connected with the actual villain False Face. The leader of this terror group is called The Black Mask for obvious reasons, and his alter ego is Commander Kane’s big rival, Roman Sionis, played by Peter Outerbridge. The villain is a staple of the Batman Rebirth comics run and well into the New 52 run.

Back to the promise that Kate Kane would not be recast. Well … she kind of was. The entire season askes the question posed in the title of the first episode: Whatever Happened To Kate Kane. Alice wants to find her so she can kill her and is upset someone else might have beaten her to the punch. She eventually just wants her to be alive and ends up working sometimes with the good guys to find or rescue her. Turns out she was in the plane crash but got pretty torn up. Alice helps give her a new face, and she’s masquerading as Black Mask’s daughter, and the good guys work hard to try to bring out her Kate memories with mixed results throughout. Wallis Day takes over the role of Kate Kane going forward. But there’s just one Batwoman, and for now that will be Ryan.

There are no slouches in the rest of the cast. Dougray Scott is … well … commanding in his role of Commander Kane. He has incredible conflict when he discovers that Alice is the daughter he gave up for dead 15 years earlier, but he maintains that military-like strength that makes him as much a villain as a hero in Gotham. Meagan Tandy plays Kate’s ex-lover, Sophie, who ends up caught in between Batwoman and the Crows. She does a fine job of playing it all. The roles should have been reversed, and Tandy would have made the better show star. Camrus Johnson is also very good as Luke Fox. His dad was Lucius Fox from the comics and recent films. He becomes the Batman gadget expert and the voice in Batwoman’s ear when she’s fighting crime. He’s a solid choice and a great character. Nicole Kang might be the character who will be the most fun to watch. On the outside Mary is a social influencer with a totally materialistic/fashionable look at life while blowing off medical school. But she’s hiding a side who cares deeply and runs a secret underground clinic for the poor. She wants so much to be a part of both Ryan and Batwoman’s lives that she ends up in danger too often, but handles it with a rather down-to-earth style. This character has some serious growth potential, and I can’t wait to see where it goes, if it’s allowed to continue. Sadly, circumstances might lead to big cast changes soon.

Gotham has a pretty nice production style that is very different from the city of the Gotham series. This is a dark place, but more glossy and flashy than the previous version. It’s a more modern place than in the films and doesn’t have any real character of its own. One of the problems with the Arrowverse is that the places don’t really matter so much. There’s enough style to give the individual shows their own voices, but they honestly could be anywhere at all.

Each episode is presented in its original broadcast aspect ratio of 1.200:1. The 1080p image is arrived at with an AVC MPEG-4 codec. This high-definition image presentation will take you to an entirely different world. There’s a lot of gritty texture to be found here. Colors don’t often pop. This is often almost a monochromatic world, but once in a while a single color will pop to deliver stunning contrast. It might be a red wig or a bright dress, but it offers just the right balance to break up any of the dreariness to be found here. Fortunately, black levels are up to the challenge with rather sweet shadow definition. A lot happens in these shadows, and we wouldn’t want it lost. For a television show, this is as fantastic as a world gets.

Villains Analyzed: (15:45) The cast and crew talk about the bad guys in this season and offer their insights into the thoughts and perceptions of these villains. Because of COVID, many join through a virtual screen.

To date this is the weakest of the Arrowverse shows. There is too much of an attempt to be woke and let everyone know and celebrate that element, and it gets in the way of good storytelling and drama. The sexual orientation, color, or gender of a hero makes no difference to me. Don’t call attention to it. Let it exist as a natural flow of the drama, and you normalize it as you should. We don’t really care in the end and will accept any character so long as that character is compelling. We have to want to spend time with a character, and that’s not easy on this show. I feel preached to, and I feel decisions are made with agenda first and story and characters somewhere down the list. You want to have acceptance? Play them out as real people, and you have a much better chance of proving your point. When you preach, you are only preaching to the choir. Show. Don’t tell. “You see, it’s confusing. You can’t sell a confusing message. Good luck with your message.”

Gino Sassani is a member of the Southeastern Film Critic's Association (SEFCA). He is a film and television critic based in Tampa, Florida. He's also the Senior Editor here at Upcomingdiscs. Gino started reviewing films in the early 1990's as a segment of his local television show Focus. He's an award-winning recording artist for Omega Records. Gino is currently working on his 8th album Merchants & Mercenaries. Gino took over Upcomingdiscs Dec 1, 2008. He works out of a home theater he calls The Reel World. Favorite films: The Godfather, The Godfather Part II, The Body Snatcher (Val Lewton film with Karloff and Lugosi, not the pod people film), Unforgiven, Gladiator, The Lion King, Jaws, Son Of Frankenstein, The Good, The Bad And The Ugly, and Monsters, Inc.
SEAL Team: Season Four The Forever Purge (Blu-ray)